After her Auntie Linda’s wedding, which had a photo booth for guests to enjoy, True was asking for a photo booth for her birthday. Ben and I were originally going to take her to watch a local musical, but after this request, our minds started spinning. Hm… a photo booth. Believe it or not, Ben even thought about buying one, just thought about it though, after talking to a few experts (and seeing the price), we decided against it. Though if it was photo booth that she wanted, well by golly, it is photo booth that she was gonna get!
The Saturday before her actual birthday was when her photo booth adventure was going to take place. It all started with her card, which was a photo booth strip of Ben and me, and we gave it to her first to start it all off! 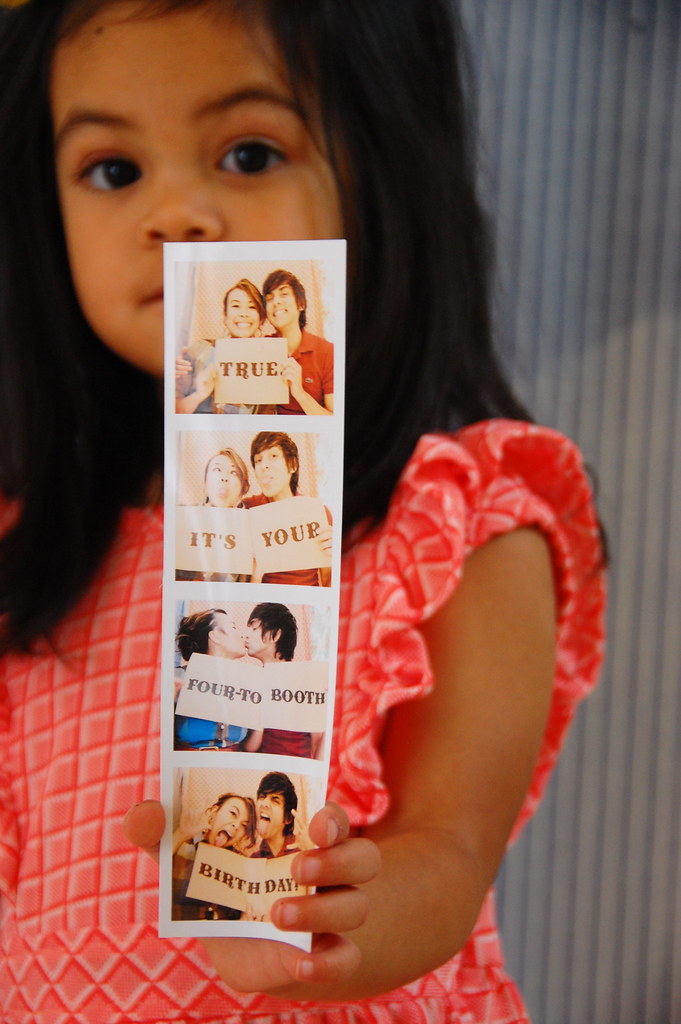 Next, we made her close her eyes and took her to our own homemade photo booth to kick off the picture taking frenzy! She was so so excited. 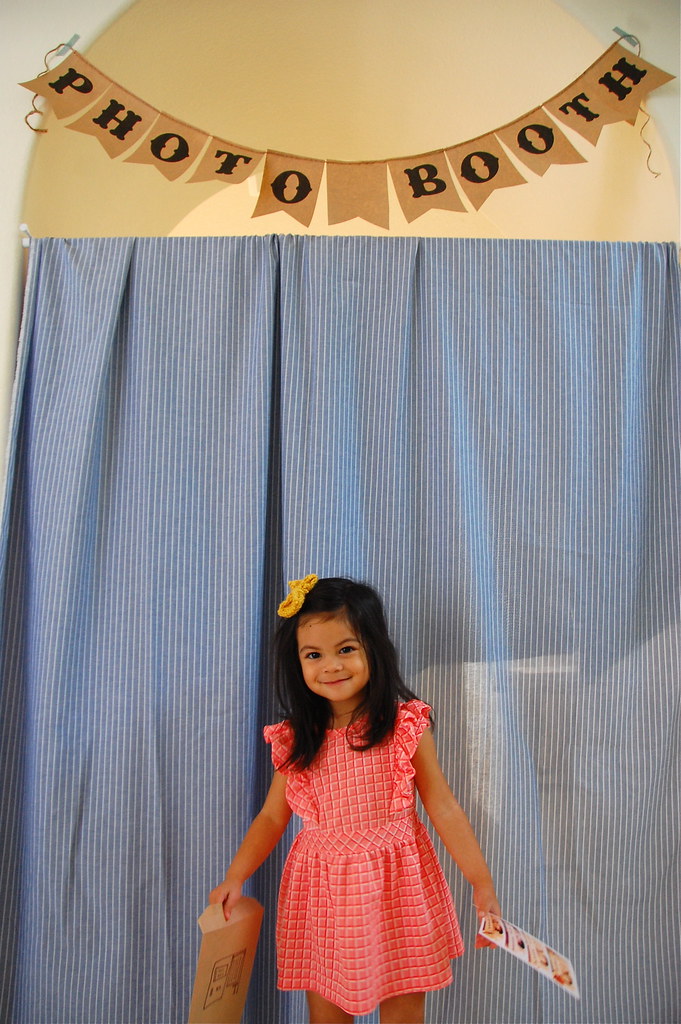 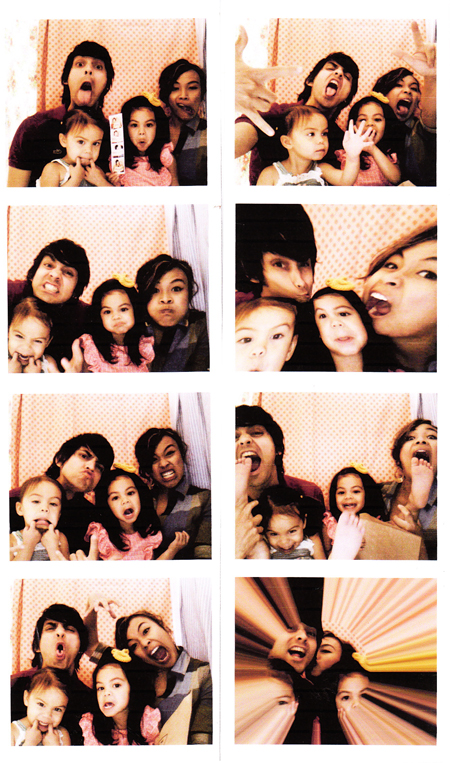 Then we gave her the next surprise, which was a small vintage suitcase full of goodies. She opened each different goody all throughout the day to help aid in the dress up photo bonanza. 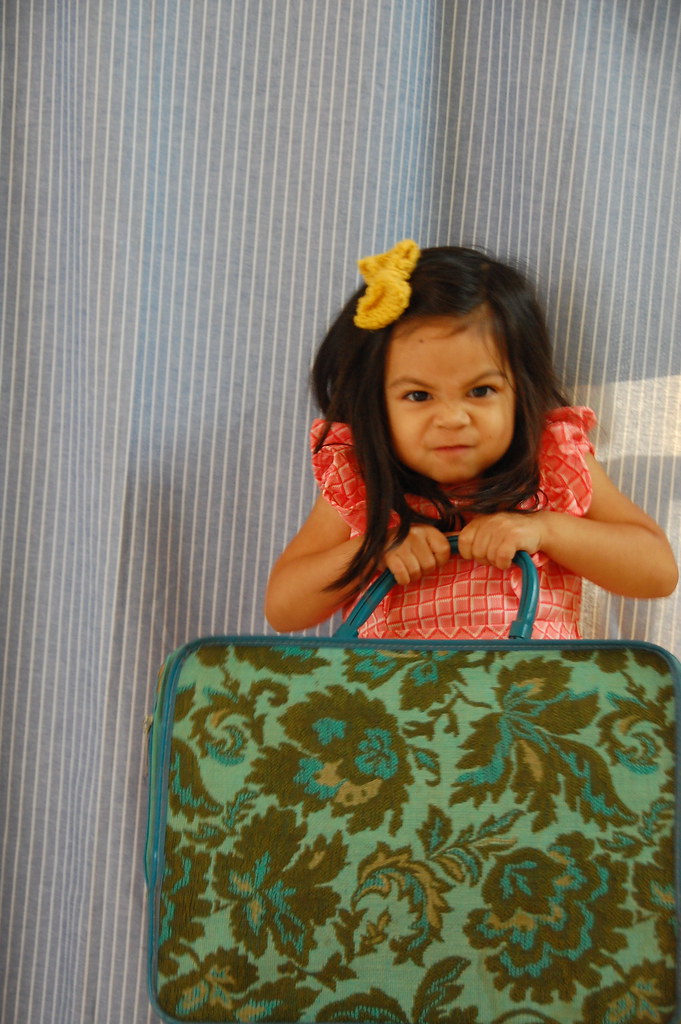 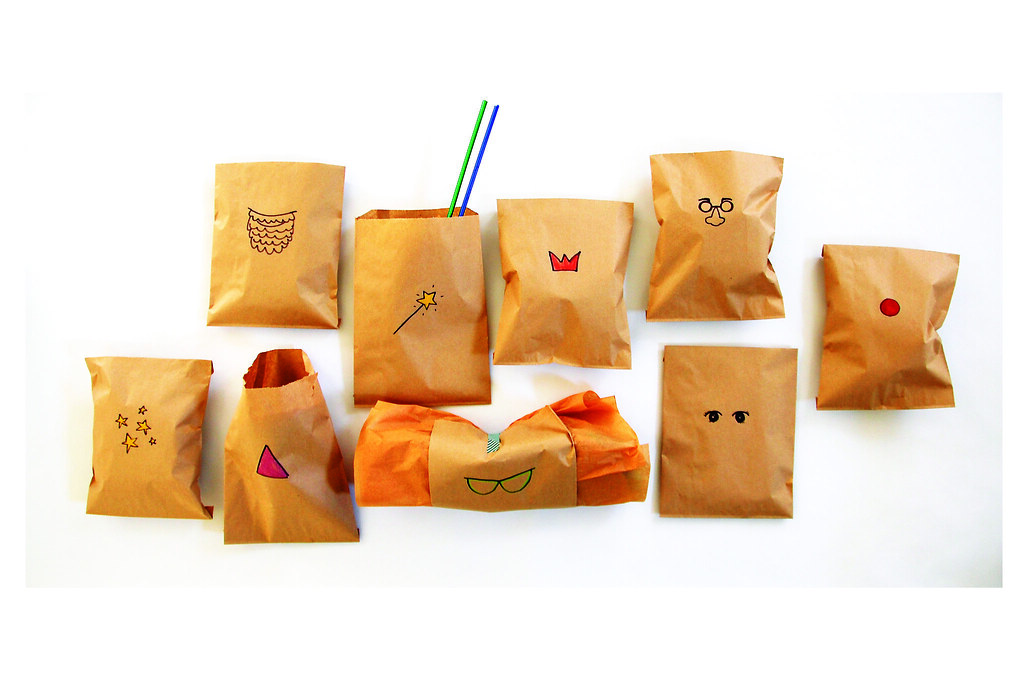 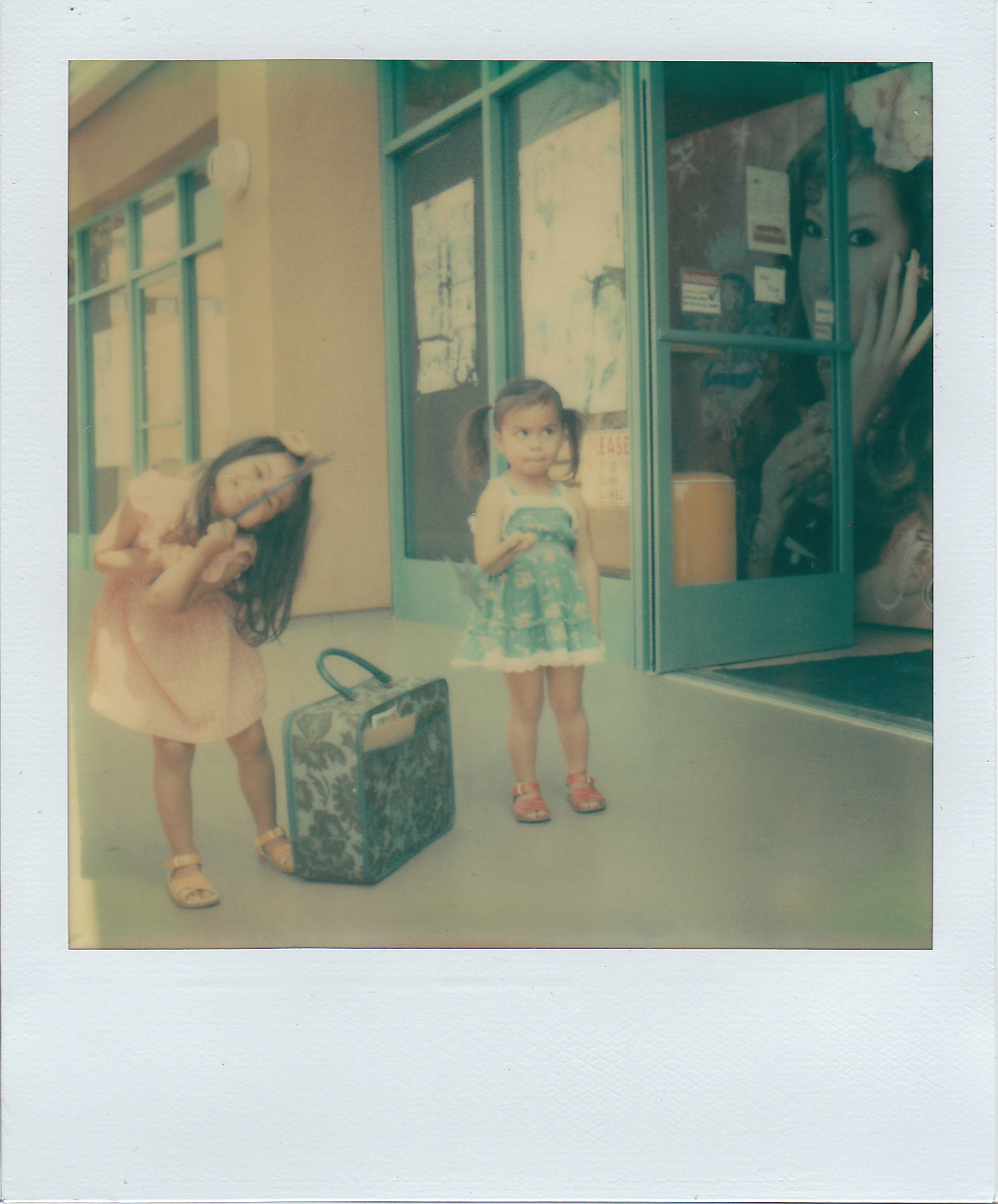 It was pretty crazy because the instructions are in Japanese, which I don’t understand, and there is so much going on. You have to pick backgrounds, colors, and get to digitally draw on your pictures. It was crazy fun! The girls loved drawing on their pictures. These pictures are also cool because they are stickers! 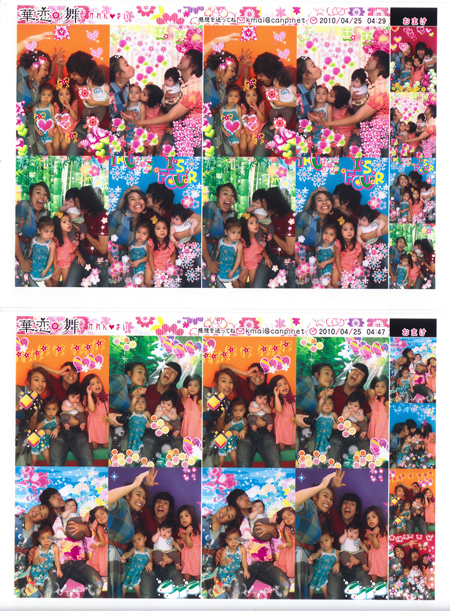 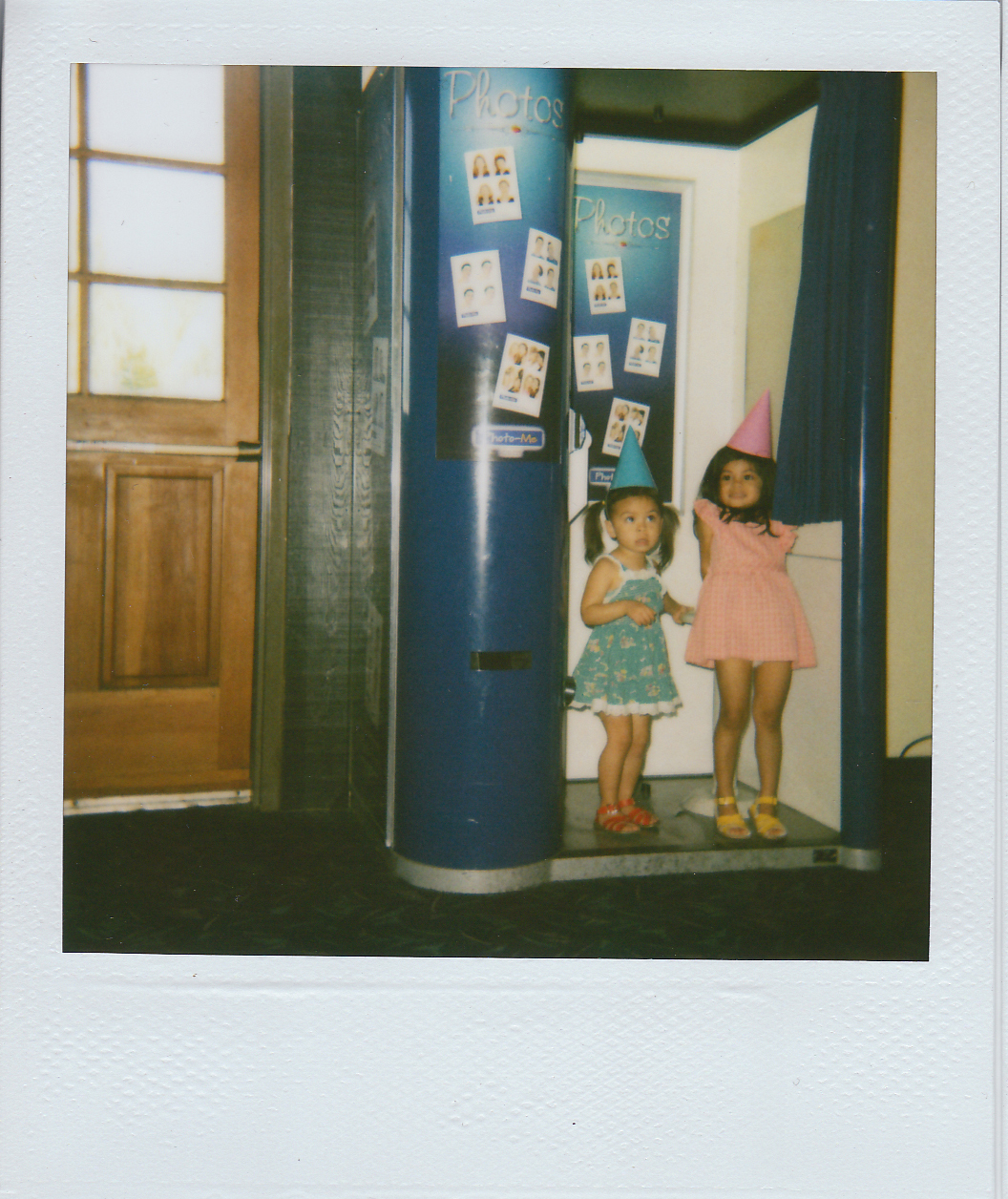 True opened up some more treats from her suitcase: party hats, homemade wool felt beards, and princess dress-up items. Everyone was getting into the dressing up and making silly faces! 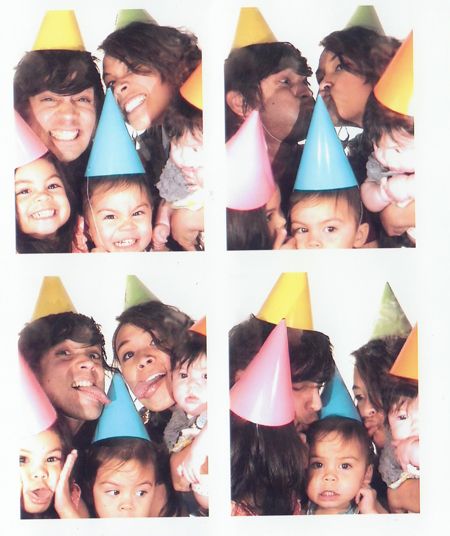 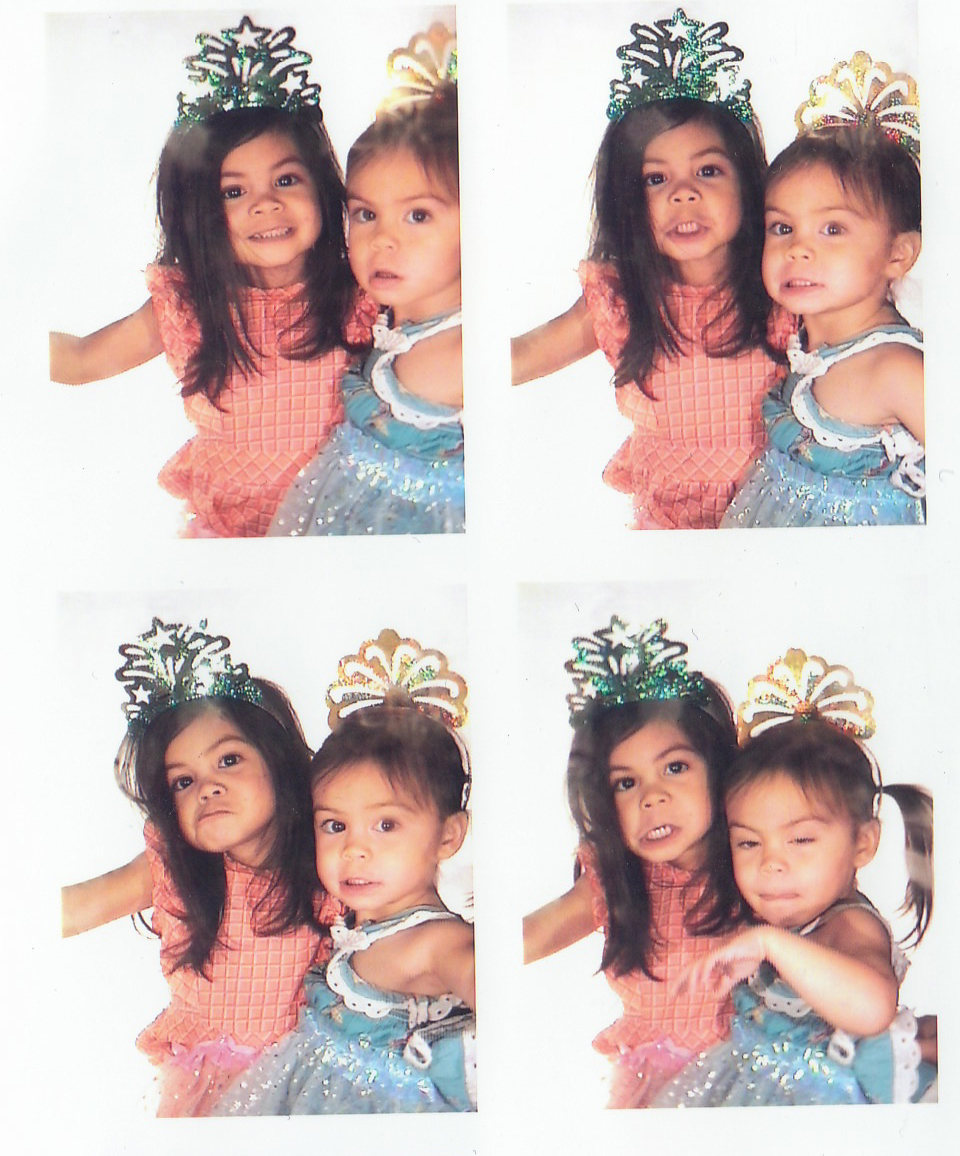 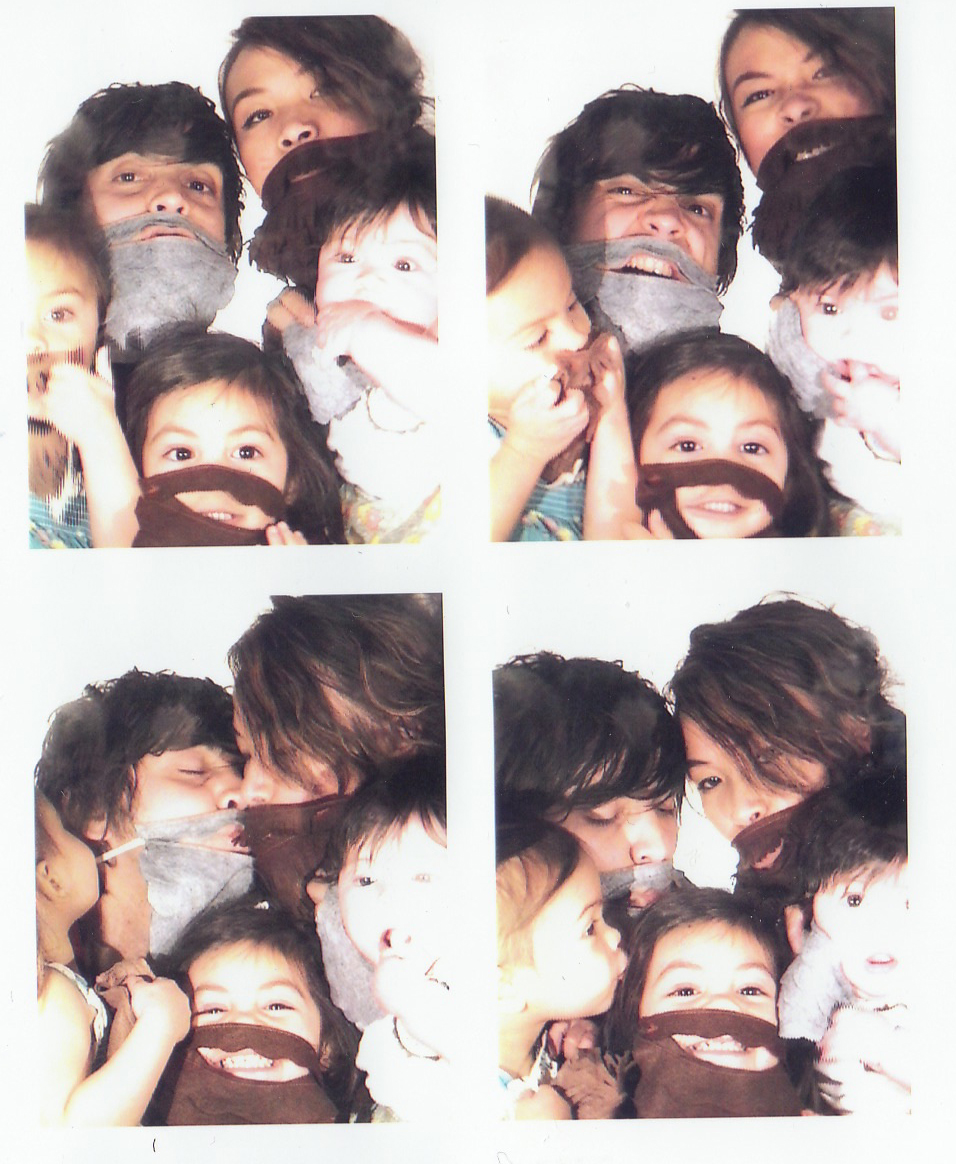 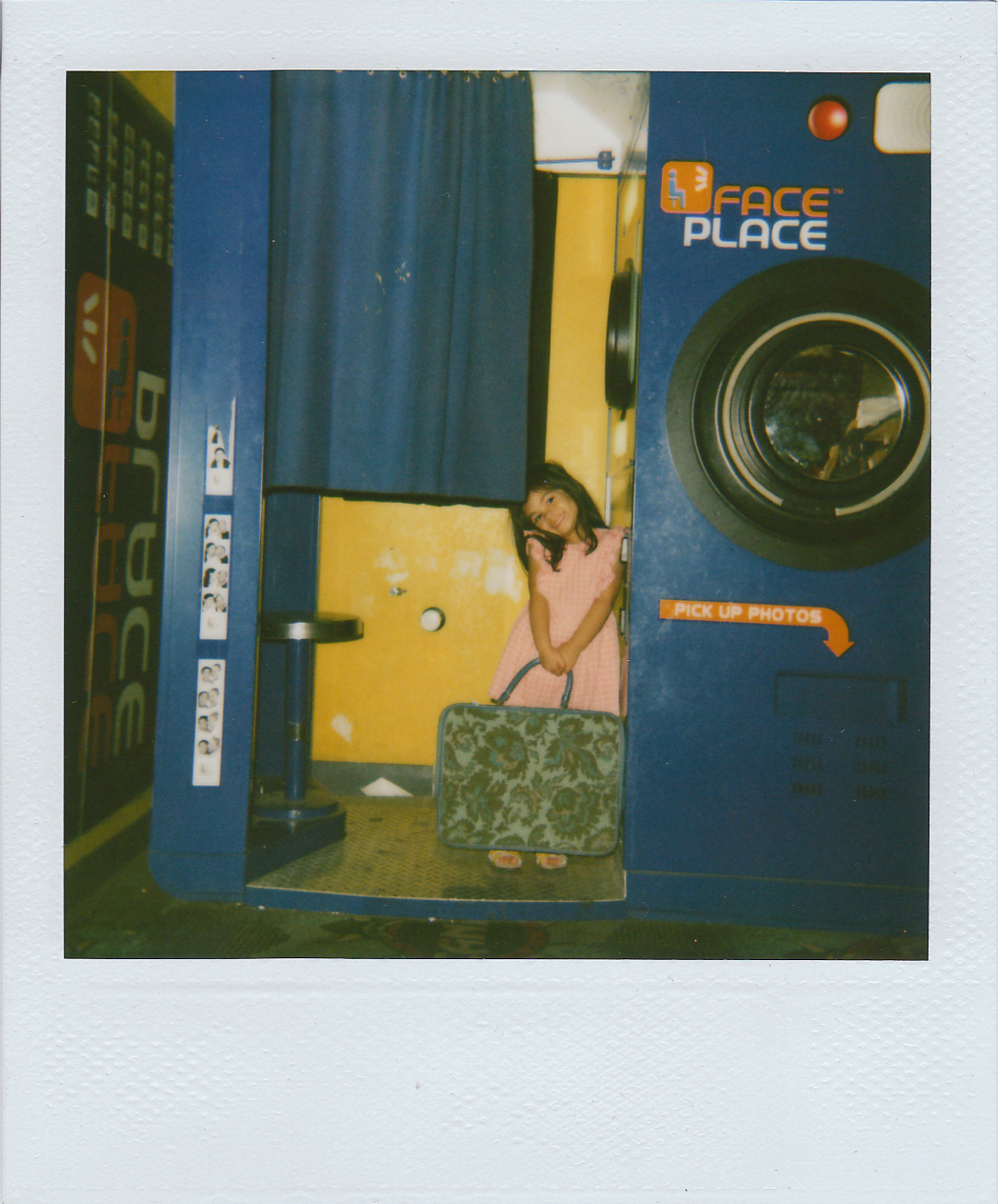 Here she opened up: clown noses, big glasses, funny eyes glasses, and glasses with a funny nose. Our favorite here was the funny eye glasses because as soon as we put them on, we couldn’t see a thing and we were all just laughing and laughing. 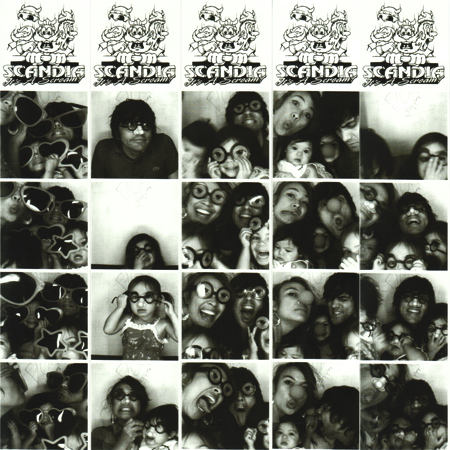 Soul was a pretty good sport throughout all of this. She was fed after each picture taking session and didn’t mind being in and out of the car seat all day long.
Last stop: Ace Hotel in Palm Springs. 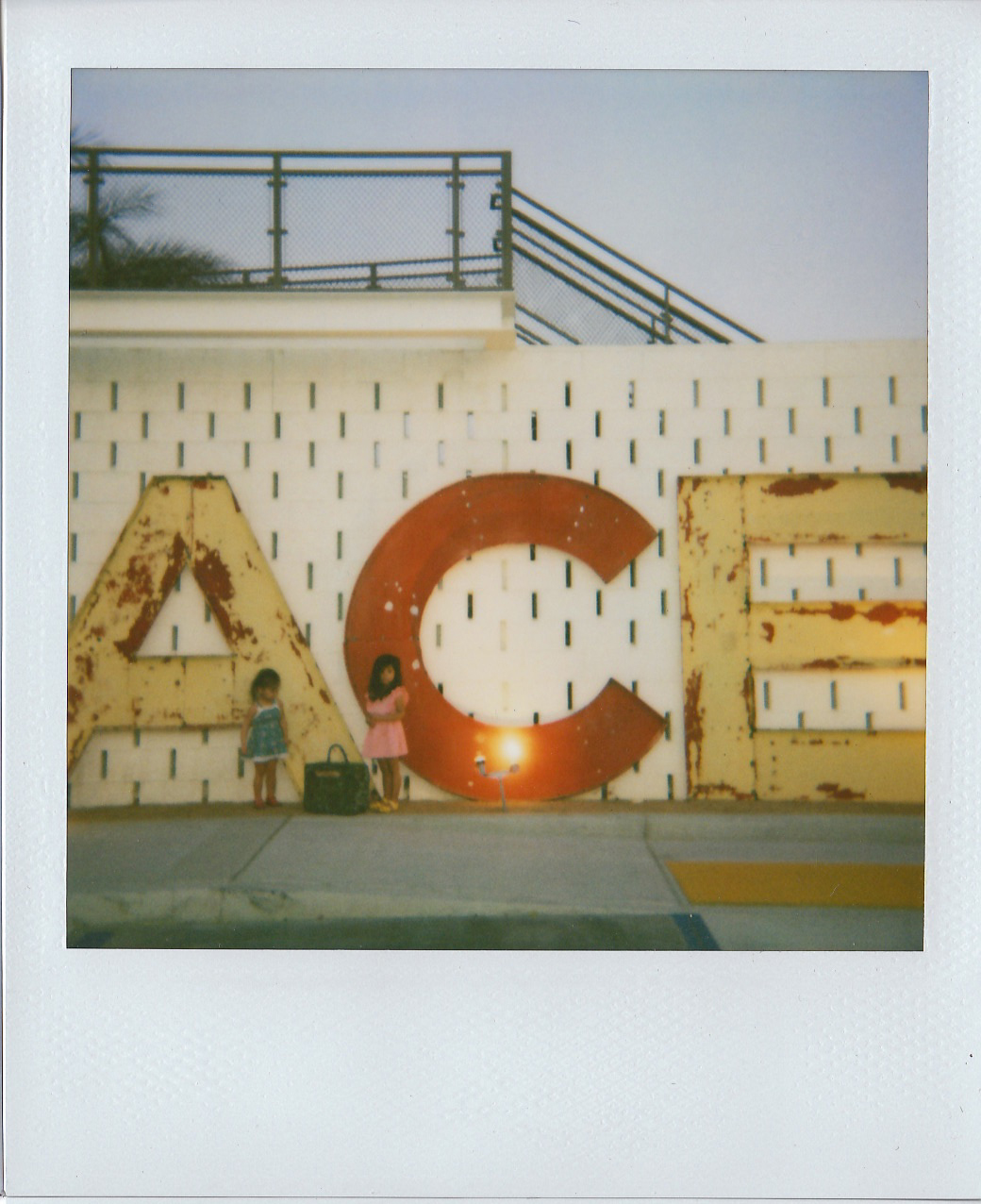 This was were we really wanted to go as we knew they had the vintage photo booth, but the machine was out of order and they were expecting the technician to come fix it that day. So we kept calling and calling to see if it had gotten serviced. As we were leaving Scandia, Ben called one last time to see if if the machine had gotten fixed, and lo and behold the booth technician just got there. Thus, we decided to make the long trek to Palm Springs. Hoping it would be up and running upon our arrival. Thankfully it was and boy was this the dreamiest booth ever! Oh vintage photo booth… we love you so so much!!! 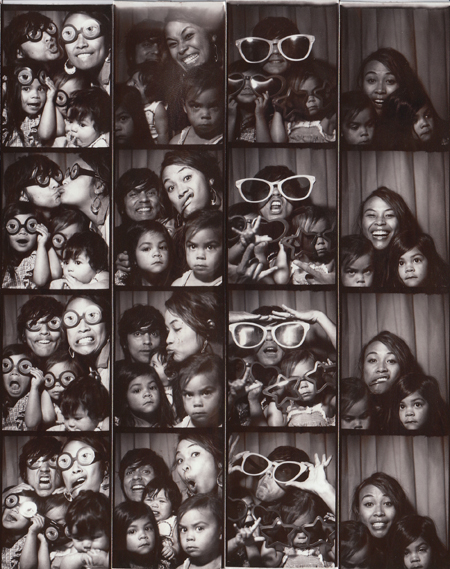 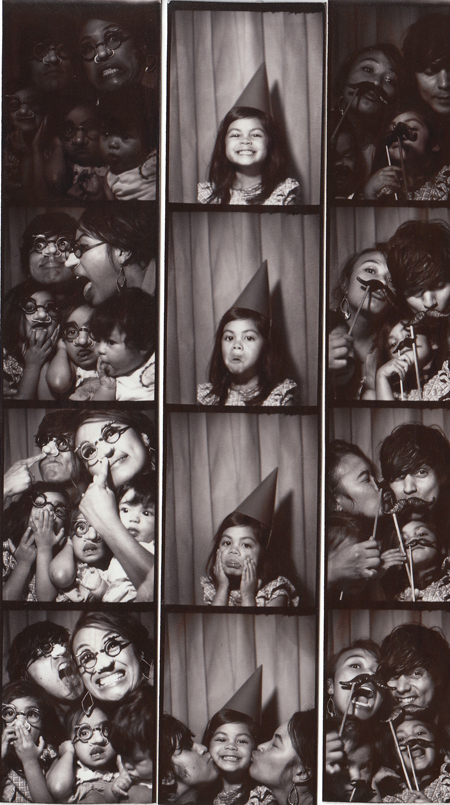 The birthday girl was the happiest camper around and was excited to be going home with a stack of photographs to tape up right next to her bed. She kept EE-ing and AH-ing with excitement the whole ride home!!! 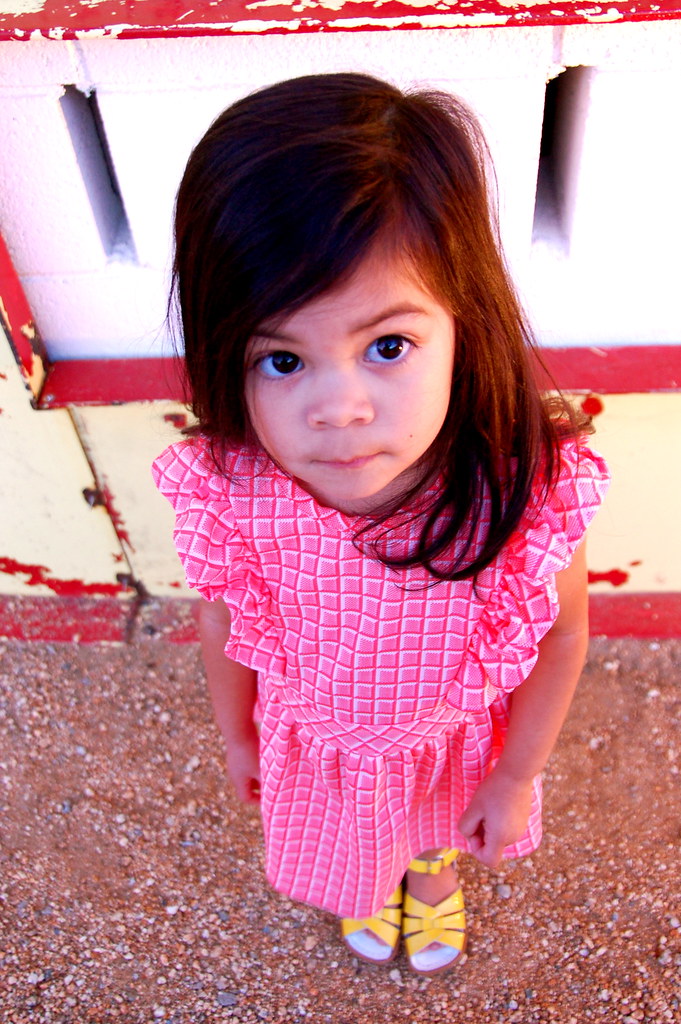 ‘Twas a lovely four-to booth birthday adventure with our little baby who is now a little girl. I can hardly believe she is 4! She got all she wished for this birthday… a photo booth, camera, and sushi. All simple, but sweet. If you want to see just a smidge bit more pictures of our fun day, check here.
If you ever want to do your own photo booth hunt, we used this site as a guide, but you do have to call to see if the photo booths are active as a lot of them have been shut down. Do you want to rent a photo booth? In California, get it here or for Portland, Seattle, Oahu rentals, go here.
*****
winner announced and my sister is having a cool giveaway.
*****

56 comments on “her four-to booth birthday”