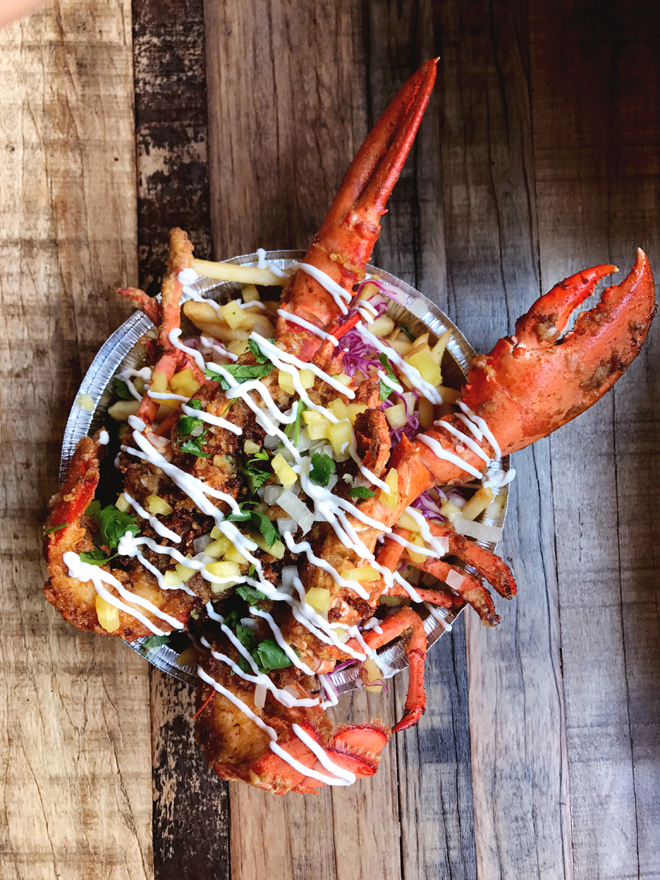 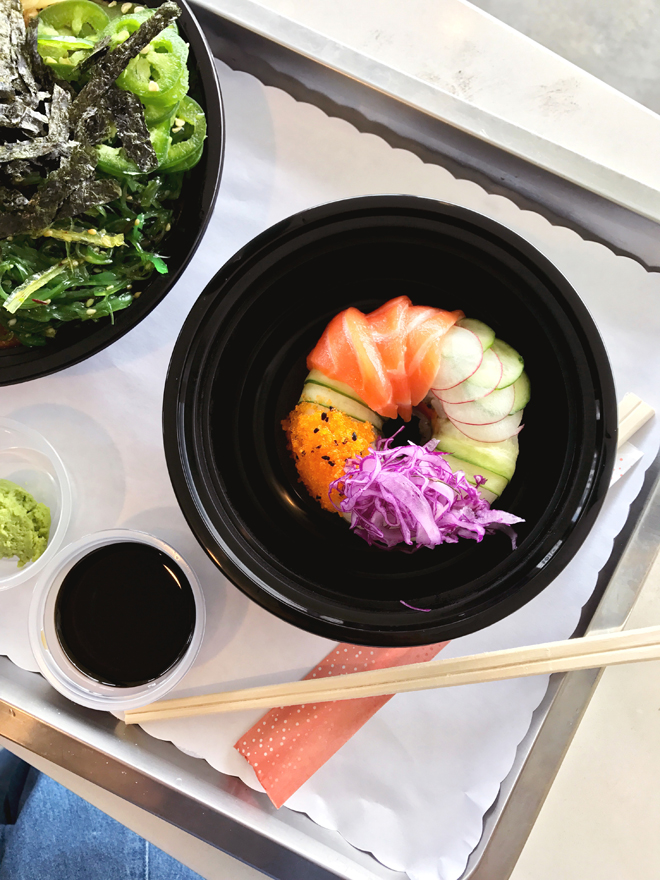 The girls were off at their grandparents this weekend, so Ben and I had some time to ourselves. We had a memorial to go to Saturday morning, after which, we went on a little foodie date. One of my favorite Instagram food accounts is @HungryHugh and I drool over most of his food posts.

Our first stop was to Project Poke. Ben ordered a bowl and I got the sushi donut; we loved both and the spicy ponzu sauce was the perfect amount of spice. We were impressed with the sushi donut because it’s not a bad value for the price. It’s $5.25 for the donut, and besides the toppings you see in the photo above, it’s also stuffed with spicy tuna inside. I’m definitely going to make my own version of this at home. I will gladly take a sushi donut over a regular donut any day.

I love seafood, so when I saw the lobster fries from Dos Chinos pop up on @Hungryhugh’s feed awhile back, I knew I had to try that sometime. I knew Ben wouldn’t be much of a fan because 1) he doesn’t eat fries, and 2) he doesn’t eat fried food, but like all smart fellas, he wanted to make his wife happy, so he was up to try it. After Project Poke (he got a bowl because he knew he wouldn’t eat much lobster fries), we made our way to downtown Santa Ana. We paid meter and thought 24 minutes was enough to get our lobster fries, eat a little, and take it on the road to go, but 24 minutes was definitely not enough.

It wasn’t a sit down restaurant (more food court style), so we were a bit surprised how long it took to get our lobster. I think we waited for about 35 minutes. Also, prior to that, I had been telling Ben it costs about $20 for the lobster fries, so we had a bit of sticker shock when we got up to order and pay, and found out market value was $37.45 (or $35.47, can’t remember). Of course, we ordered any way since we were already there. After the long wait, and shelling out some pretty pennies, we finally received our lobster fries in all its fried goodness (badness to the dietitian, or he’d correct me and say “low nutrition-ess”). I immediately dove right into it and loved the lobster meat; it was absolutely delicious. The fries were good too, but nothing extraordinary. All the deliciousness was in the lobster meat. Ben was not impressed, but he doesn’t eat fried food, so he’s kind of biased. If you love fried food, fries, and lobster, I think you should definitely try this place. Just call before you head over to find out what market value is. My parents went a month or so ago and the price was in the $20s, so I think that’s why $20 got stuck in my head.

Since the lobster took so long to cook (and then eat), the rest of our plans for the day kind of got ruined. We had planned to go further south to a plant nursery, but it would have been closed by the time we got there. We had a little tiff (he was crankier than me, maybe cause I was high on lobster and oil). Thankfully (a little later), he came to his senses and lovingly apologized, I happily accepted, then all was well again in Bratcher Loveland. That’s marriage for you… sometimes love abounds, and then sometimes bad attitudes get thrown in for good measure and we grow from it. We spent the rest of the day with him working on things in the garden and I was able to do some cleaning while the girls were gone. I loved our little foodie Saturday date, even though we had some cranky hearts involved. 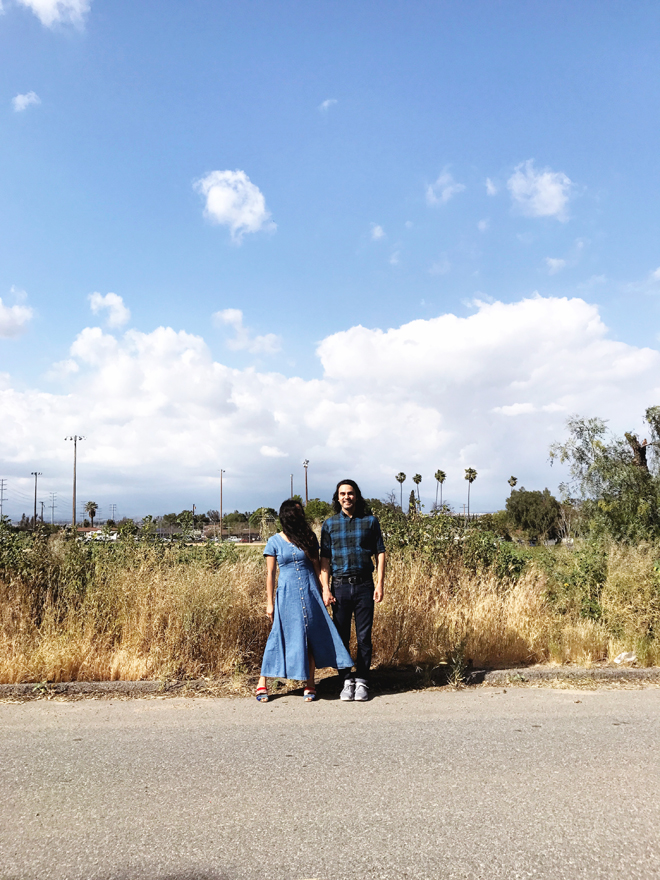 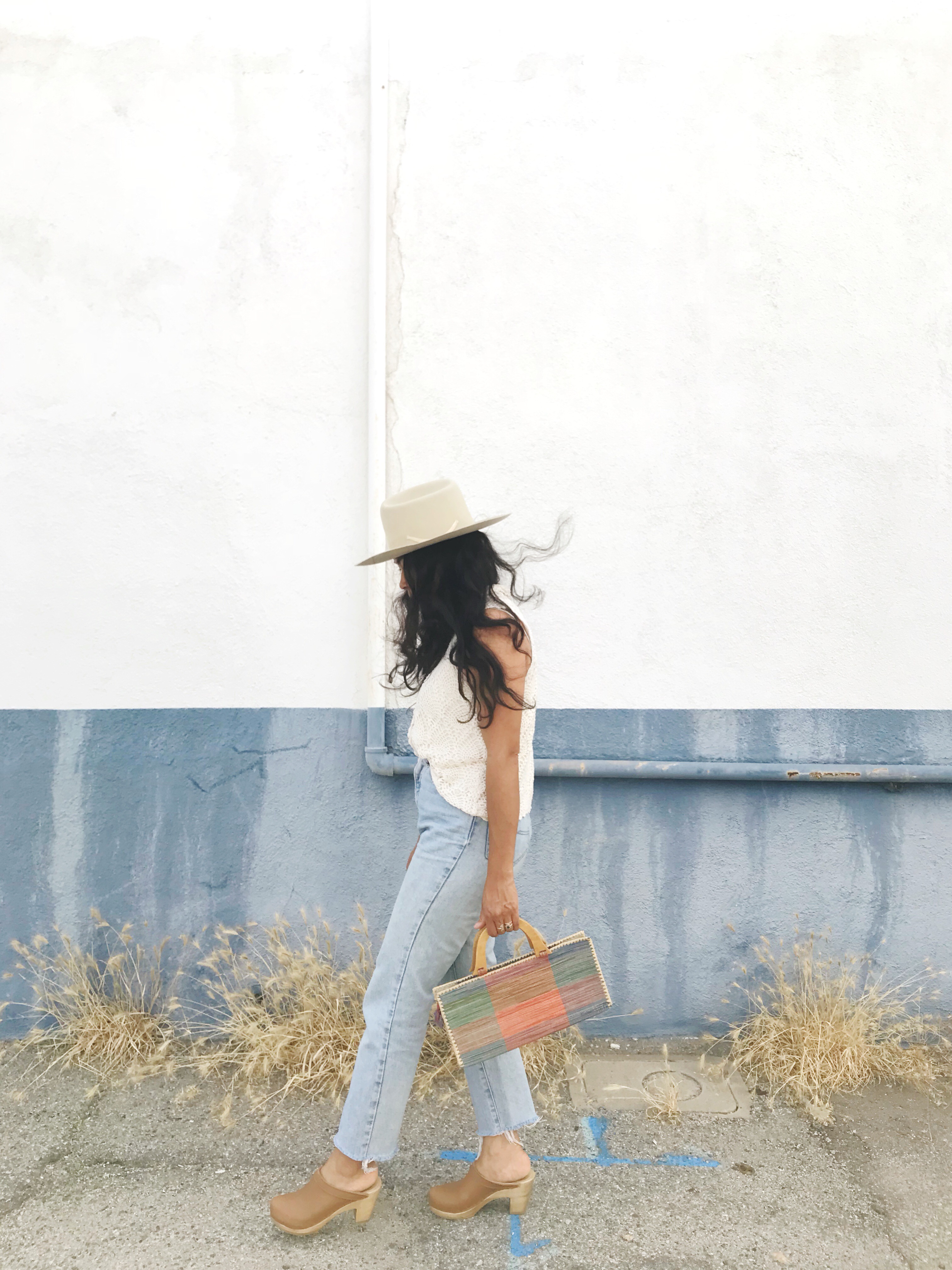 4 comments on “a little foodie date”