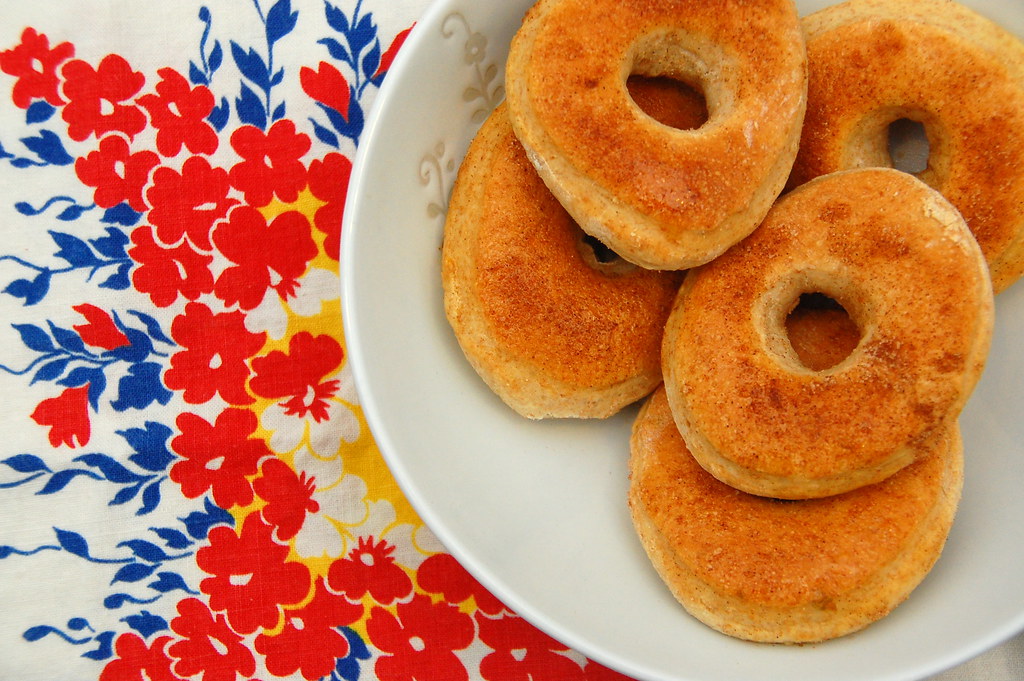 I really like being able to make my own doughnuts. It tastes really good! This time around the batch came out a bit lighter (not as dense), but I did make a couple tweaks again. I don’t think I have quite perfected the recipe, but I will share it and maybe you can help me figure it out and work some kinks or leave as is cause it still is yummy.
baked doughnuts recipe
(using these two already yummy recipes as a guide)
*my tweaks to the Heidi Swanson recipe
*1/2 cup of applesauce
1 1/3 warm cup of milk
1 packet active dry yeast
2 tablespoons butter
*1/4 cup sugar
2 eggs
*2 1/2 cups whole wheat flour
*2 1/2 cups all-purpose flour
*a big pinch of cinnamon
1 teaspoon sea salt
for the outer sugary coating:
*2 tablespoons butter (I used Smart Balance)
1 tablespoon sugar
1 teaspoon cinnamon
To make everything, I pretty much followed Heidi Swanson’s recipe instructions, except that when I added the eggs and flour, I also added in my addition of applesauce. The dough will definitely be too sticky, so you will have to keep adding some flour (a few tablespoons at a time) to get the dough to be smooth and not sticky.
I also haven’t baked the whole dough at once since I like them fresh (and we do everything in moderation as not to overindulge), so I separate the big ball of dough into smaller balls and refrigerate them. I take them out when I want another fresh batch. Usually, I only make about 10 doughnuts at a time, so my little recipe for the sugary coating is only alloted for that small amount. If baking the whole dough, just follow the Heidi Swanson’s recipe for sugar and cinnamon amounts. Another note I have is that I haven’t got the recipe quite right where you can really taste the apple flavor, so I will have to attempt another batch using more apples in it and maybe use whole wheat entirely, but now that I am thinking about it, maybe pumpkin doughnuts would be good too. Otherwise, I still think it tastes darn good!
I highly suggest baked doughnuts as it is much better than fried doughnuts and just as yummy! If you do give the recipe a go and do any tweaks, please share. Plus, it really is so, so easy…
Happy baking!!!