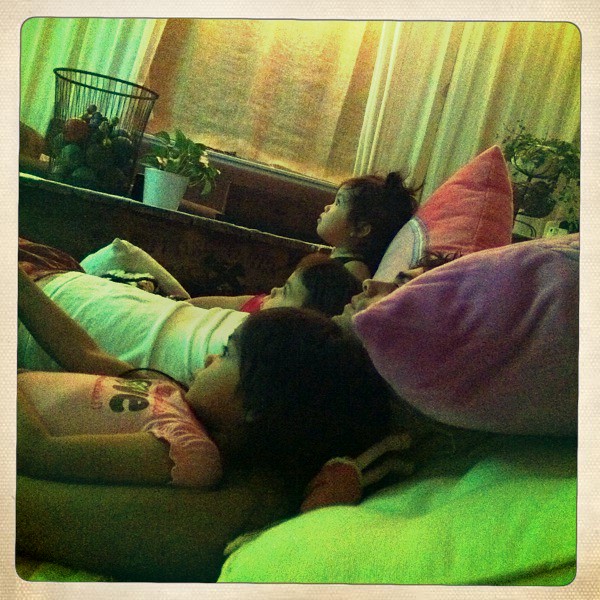 How can weekends go by so fast?!! I really don’t like it. I think weekends should be three days long. Despite going by quickly, our weekend went well. I didn’t quite get everything done that I had planned as having your car battery go completely kaput on you really changes plans on leaving to go get plants at the nursery, but things were done.
Ben is almost done putting together another garden bed (I can hear him hammering outside as I type this). I cleaned out the front porch, did some weeding and deadheading in the garden, and did some garden furniture moving around. I made enough space back there that we will have room for another 6 ft. long garden bed. We are so excited, but now we just have to actually make it. A project for next weekend? Maybe.
And just to be clear, though we have decided to go without a television, I don’t think it is wrong to have a television or allow your children to watch television (my kids are very familiar with yo gabba gabba). I think you do what you think best fits the personality of your family and for us, that means trying without a television for now. Plus, when I do need to get cleaning done, there is always She-ra on Hulu! I am a normal mom after all…
Though we don’t have one, as you see in the picture above, we still had a family movie night. What did we use? A projector, computer, and nice, big, white wall space and we had ourselves our own movie theatre. So having no television doesn’t mean we will cut out family movie nights, cause those nights are special. We had lots of them when I was growing up and Ben did too. What was showing at our house? Tangled. And the girls loved every bit of it, even Soulie.
Hope your weekend was just as swell! I am starting off Monday with a huge pile of clean laundry to put away, so let’s hope I can find some time to do it.