I have been finding it more pleasurable to be spending time in the kitchen. I actually started decorating it a bit. Kinda. Our kitchen is pretty clean, but not really decorated. You won’t really find it on a house tour because as much as we like the openness of it, I don’t really like the color of our cabinets. I dream of white cabinets. One day, it will happen, if God allows of course.
Monday we ate Pasta Puttanesca with Oven Roasted Cauliflower with Garlic, Olive Oil, and Lemon Juice… 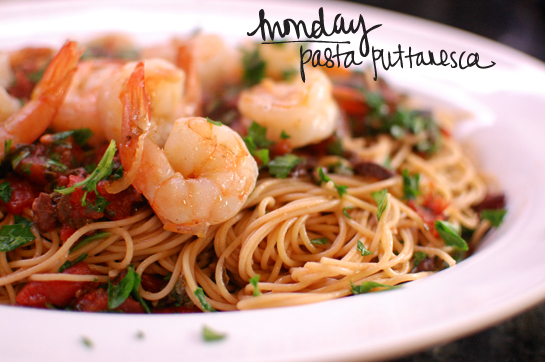 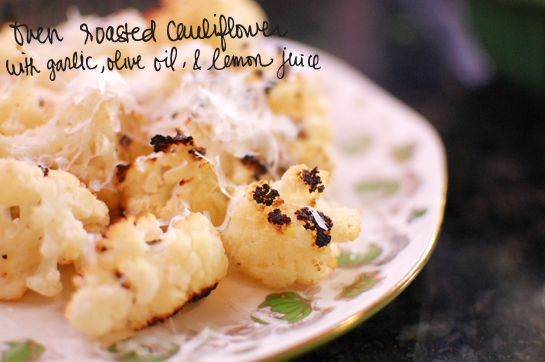 I followed the recipe exactly and it came out fantastic. Ben and I could have use more red pepper flakes in it, but the girls are eating it too, so we kind of have to go light on the kick. The recipe didn’t call for any protein, so we used shrimp.
The Oven Roasted Cauliflower was another yum. It was a variation of a normal vegetable dish we make, but this recipe called for lemon which was a good zing. The recipe says to put 1/4 cup olive oil, which I think is a bit much, so I put 2 tbsp and kinda stuck my hands in and rubbed it all around the florets. I think that worked just as fine. Will make this again.
Tuesday, we had Salmon Cakes BLT Burgers… 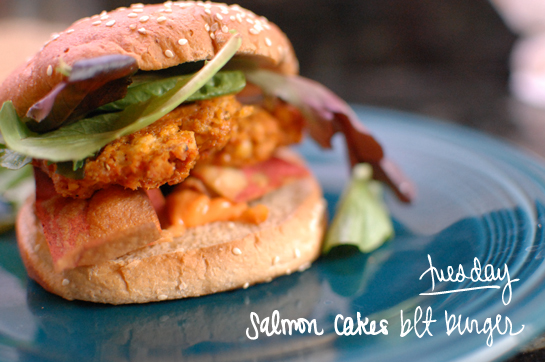 We actually made this on Sunday too and it was thanks to Jen from Our Happy Family leaving a comment on how to make it. Once I saw her comment, I knew I wanted to try it right away. I love crab cakes, so I thought this one sounded good and pretty healthy.
I used whole wheat panko bread crumbs along with two cans of salmon. I don’t like celery, so I didn’t use it. I used half an onion and four cloves are garlic. For seasoning, I used cayenne pepper (lots!) and cumin. Mixed in a bowl along with two eggs. Then, formed patties and placed on a pan and stuck it in the oven for 20 minutes, flipping after 10 minutes. Thanks Jen!
For the burger, I baked some soy bacon (tastes like the real thing to me!), mixed some siracha and eggless mayo together for a sauce. Toasted some whole wheat buns, added some greens, a dollop or two of sauce, the salmon cakes, 3 slices of soy bacon, and some avocado and we had ourselves a winning burger! For veggies, we had some canned beets.
Wednesday, we indulged in Chicken Cacciatore… 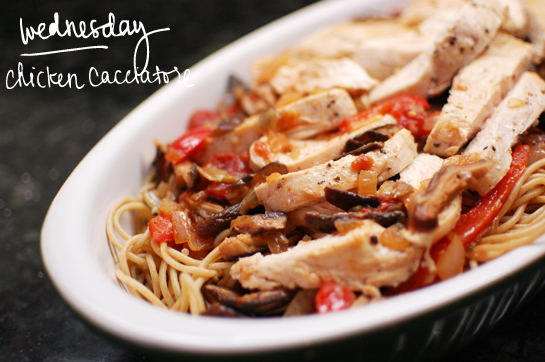 A pretty good dish, though Ben felt like it was missing something. I accidentally chopped the onions instead of slicing and I used shiitake mushrooms instead of white mushrooms. While we were eating it, Ben and I both added more red pepper flakes to our own plates because we love things spicy and felt it just needed something more. The girls seemed like big fans of this dish as they were all devouring it, so that’s a good sign.
Out of this week’s dishes, Monday was by far my favorite.
Week 2/27 – 3/2
Monday: Scallion Meatballs with Soy-Ginger Glaze with Spiced Coconut Spinach
Tuesday: Ginger Soba Noodles
Wednesday: Ground Turkey Tacos (something I already know to do)
Thursday: leftovers
Friday: Pizza or something easy
I am in need of more vegetable dishes to accompany our meals. Ben is good at figuring those out on a whim. Me, not so much. Have any good quick veggie dishes to share! We have canned veggies ready to eat on hand, in case I don’t plan for it, but I would like to start planning for it more.