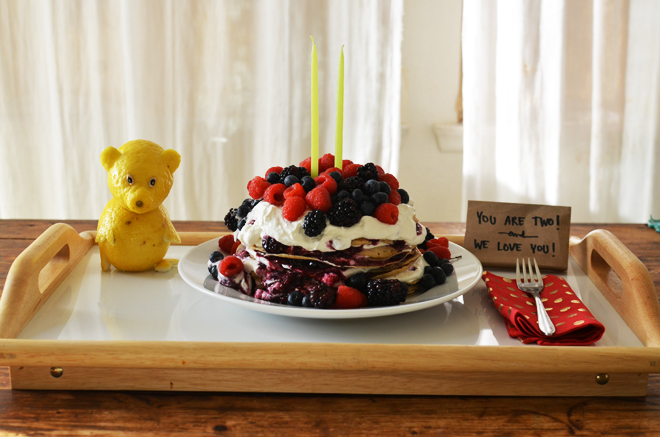 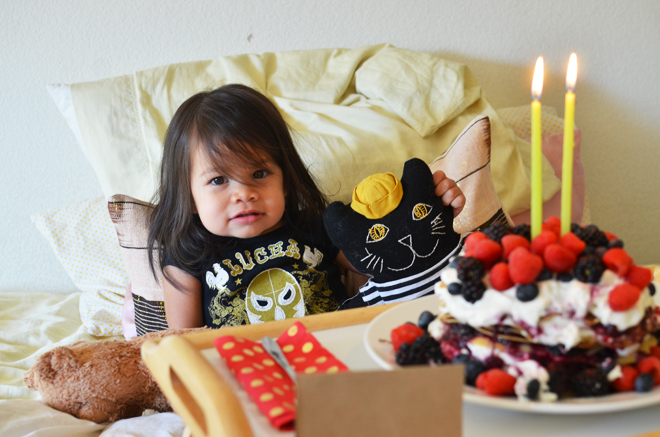 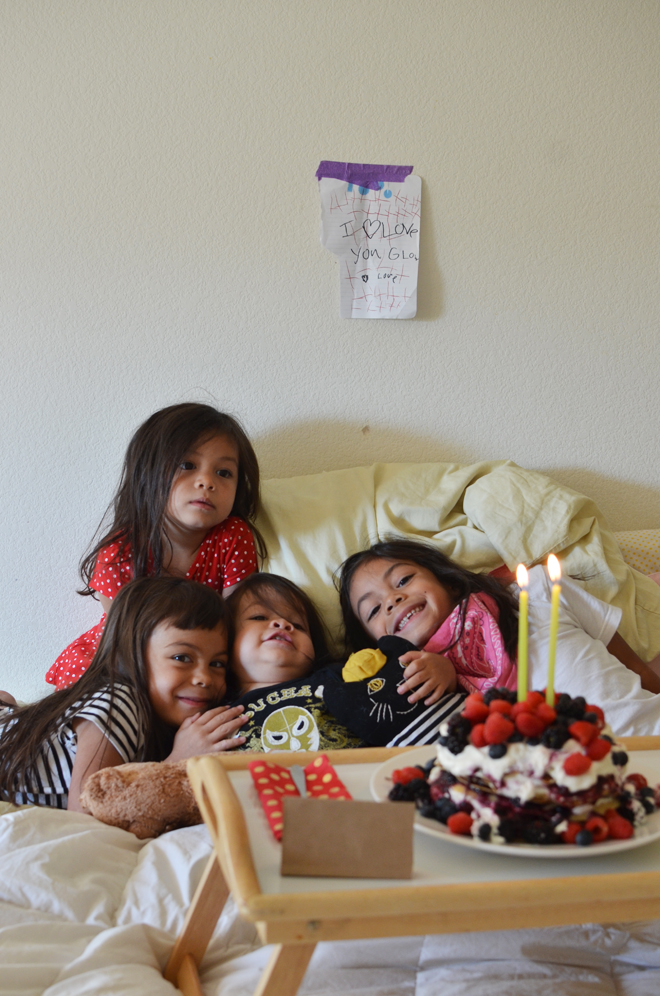 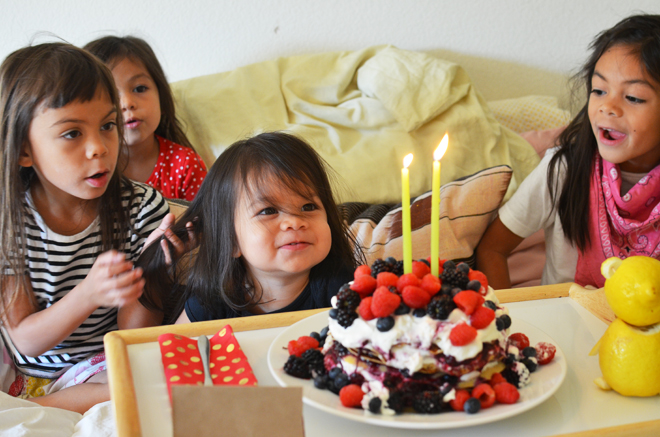 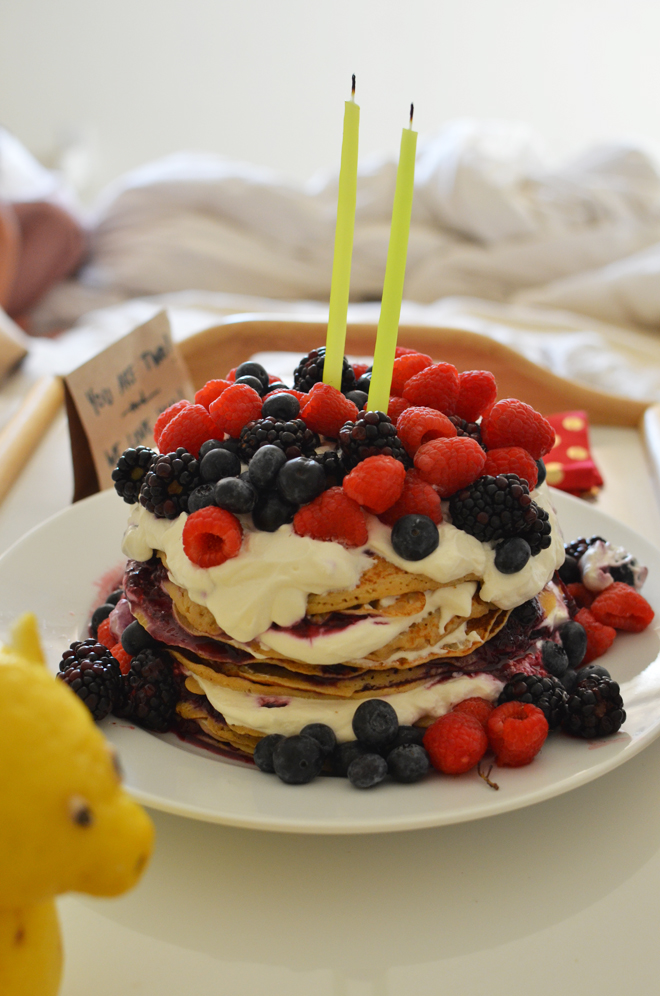 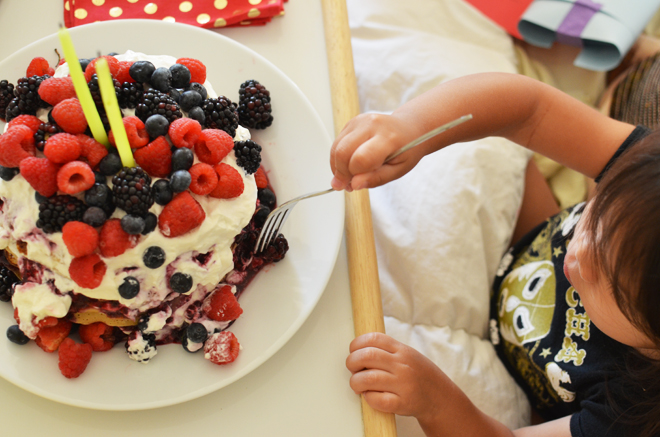 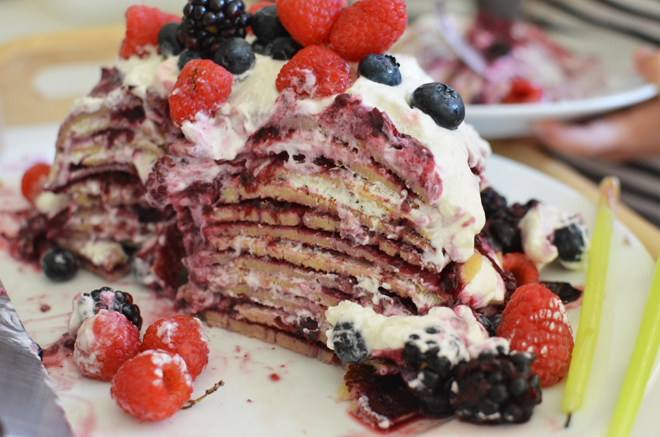 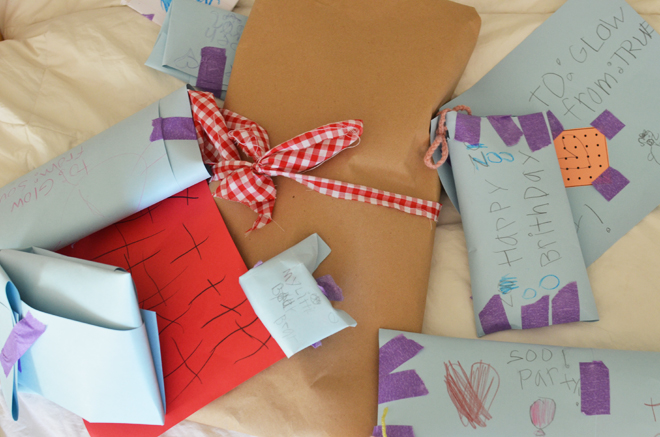 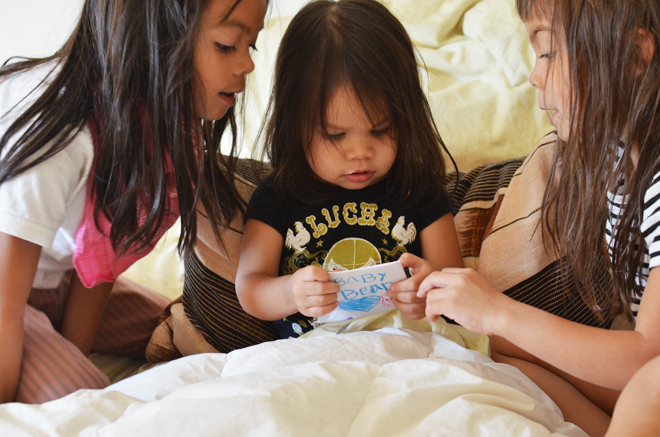 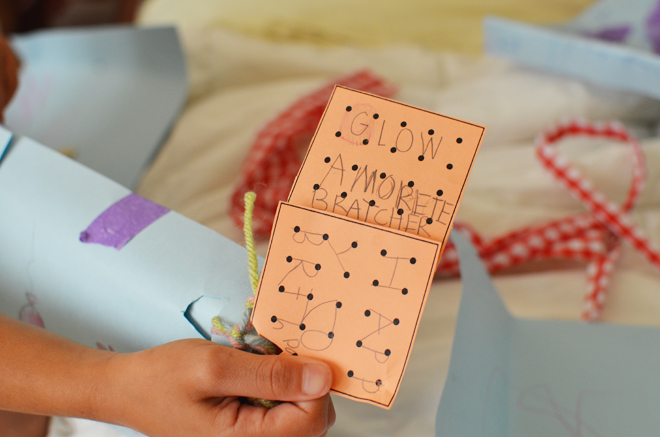 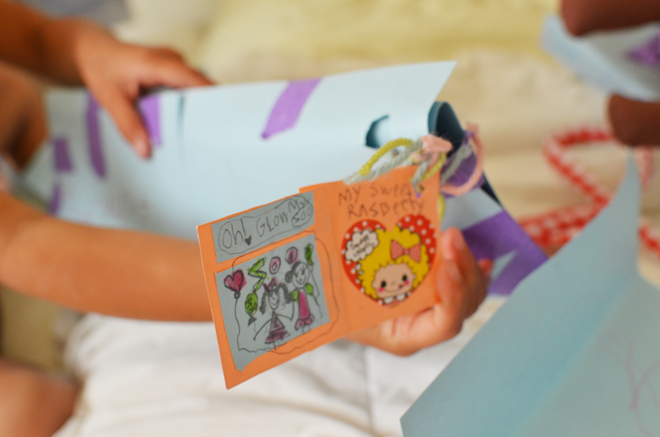 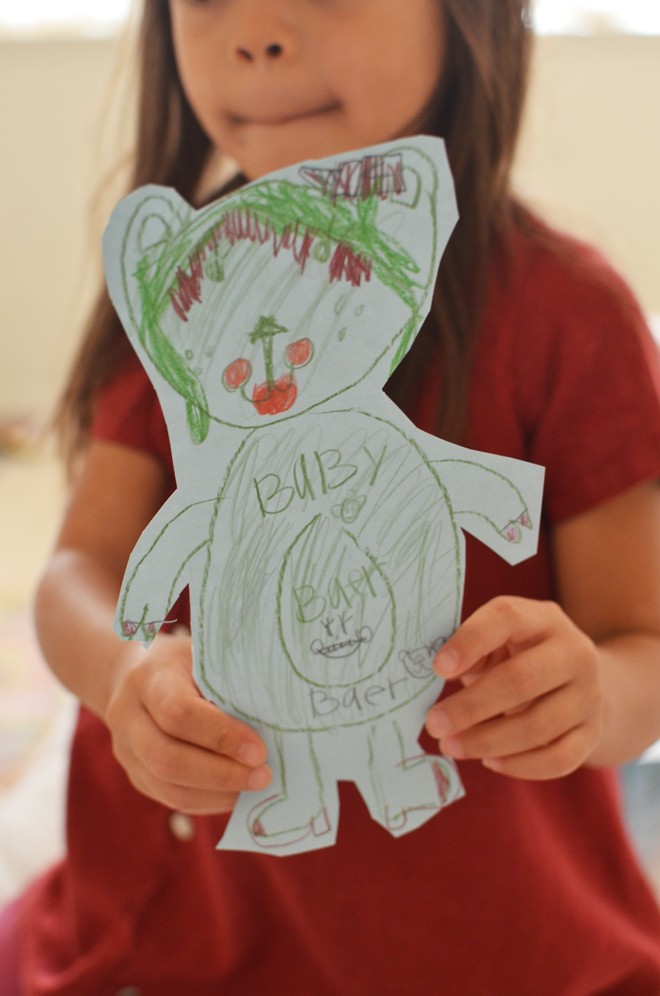 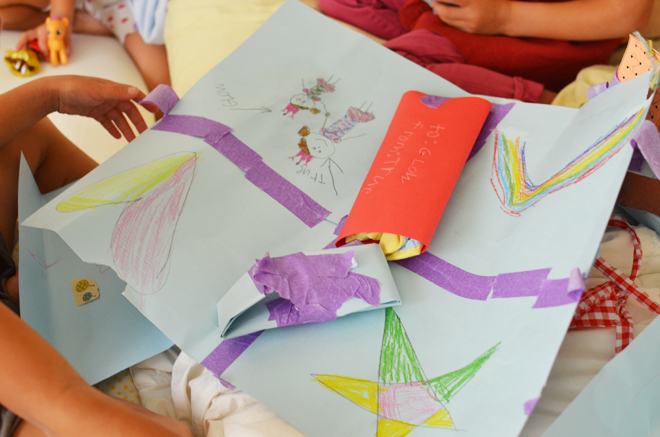 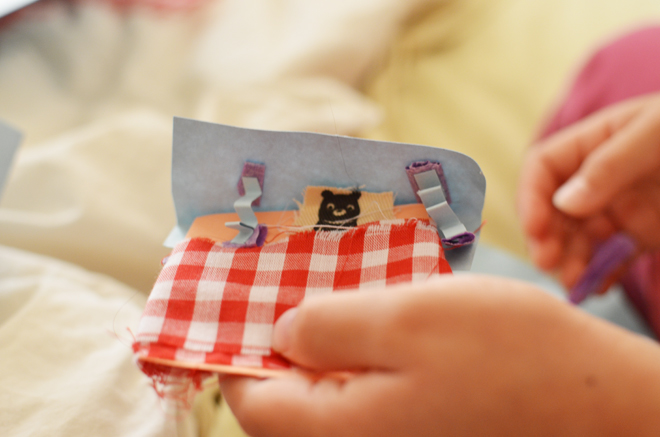 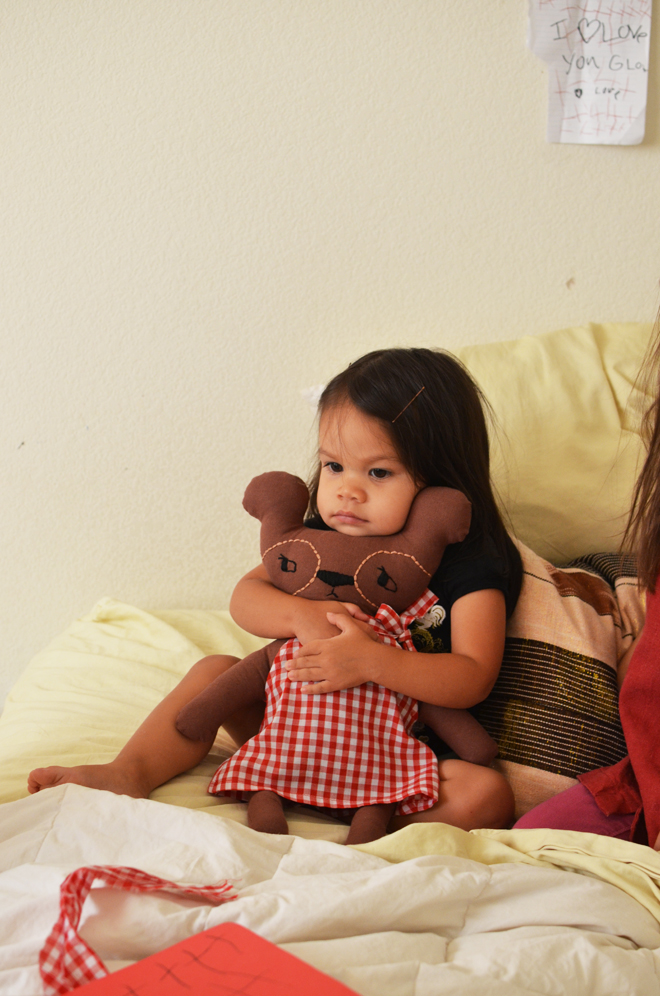 Glow gets her 2nd official breakfast in bed (see her first one here). We had a special birthday adventure out planned and there wouldn’t be any opportunity for birthday cake, so I made her this cake for her breakfast in bed. We let her have the first few bites of it, then we cut it up so each girl could have a slice. They devoured the entire thing and there was nothing left!

After they filled up on cake, Glow opened her presents. In that picture above with wrapped presents, only one thing in that pile was from us and everything else was made by the girls. They came up with their own ideas and I had no clue what they had made until it was time for Glow to open it. Our Glow is obsessed with bears, she calls them “baby,” so it was cute to see all the little bear things the sisters made for her. There were pop-up cards, bear paper dolls, and bear drawings. That’s also why Ben chose to make her a little bear out of lemons on her tray. She kept pointing at the lemon bear and saying, “Baby!”

Our gift for her was a mama-made bear softie (in the last photo). She gave it a big hug once she opened it. We were stuck on what to give her because she has 3 older sisters, so there’s not much she needs (she gets plenty of hand me downs), so we figured a bear was the best thing. I worked on a pattern and came up with this little gal. It’s been attached to her ever since! I will be sharing how I made it soon (with a downloadable pattern and all!), so you can make one yourself if you so desire a “baby” for a little one in your life.

After the breakfast and present time, we all quickly got dressed to head out (okay, it wasn’t that quickly as we left the house an hour and a half later than planned!). We had a special day planned to celebrate our littlest love…