it makes her unique 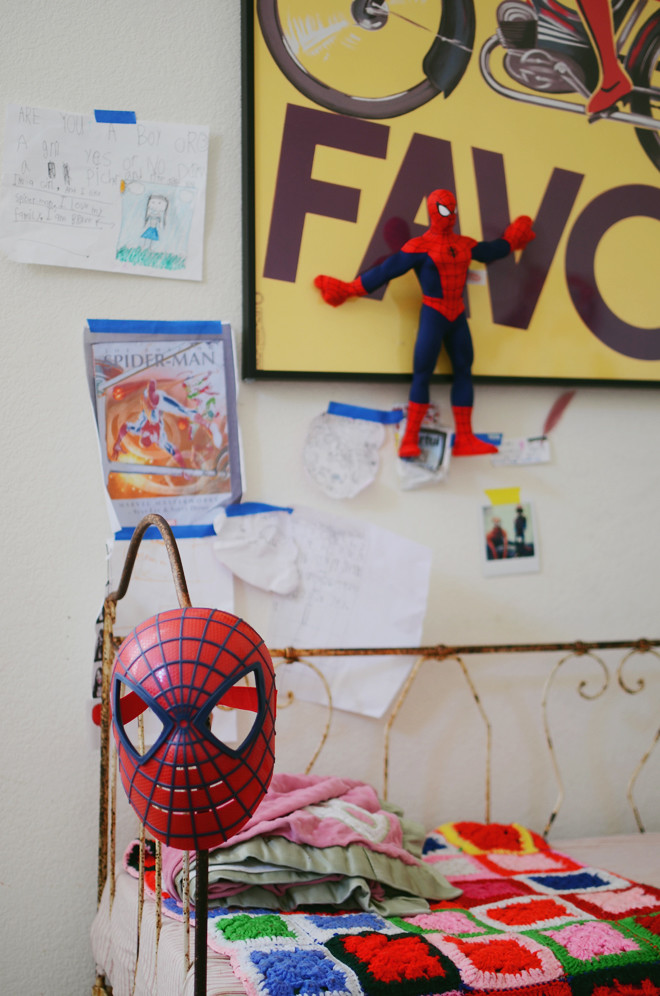 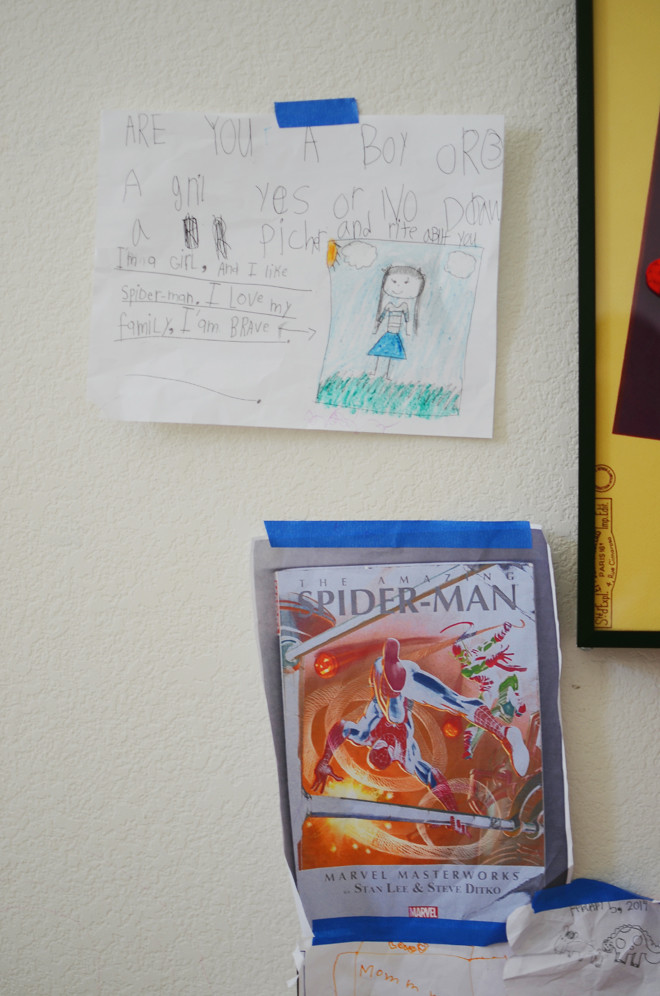 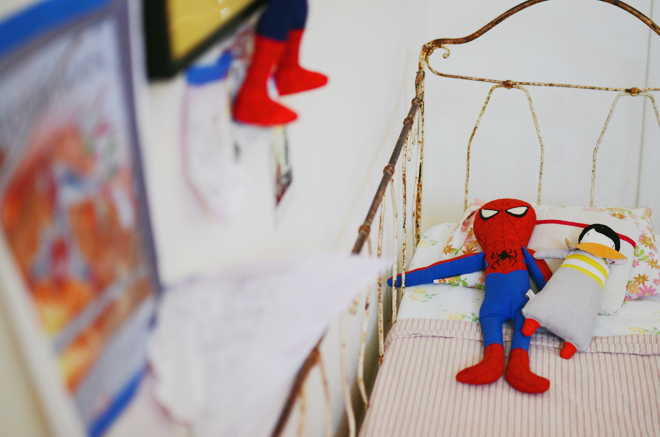 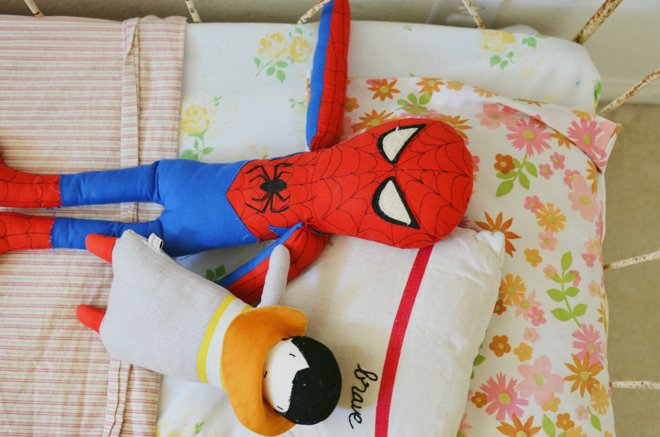 Brave’s love for Spider-Man started a few years ago, and I thought it was just going to be a phase, but it’s only grown even more. I made her the Spider-Man doll a few Christmases ago (see here), and every time a special occasion rolls around, everyone loads her up with more Spider-Man things like this mask and lots of little Spidey things. Ben’s cousin also gave her four volumes of Spider-Man comics several months back, and that just changed her life. She knows all about Peter Parker, and because he wears the same things in the comic, she tends to wear the same things all the time too, particularly those blue striped Misha Lulu pants. They’re worn so much that the pockets in the back tore off, and Karen was kind enough to send her another pair.

A month or so ago, we were passing by a comic store and saw a poster for a Spider-Girl and that just blew her away, another life changing moment. She didn’t know that there was a Spider-Girl (nor did I), and she had so many questions about her that we had too look her up online to get more info. Then this past week, Brave looked up at Ben and said, “Papi, do I scrunch my nose when I talk? Because Spider-Man scrunches his nose, so I want to too.” The spidey influence has led her to always be wearing red or blue (or both), prefer shorts and pants over dresses, and want to climb walls. She knows that last one is not allowed though. 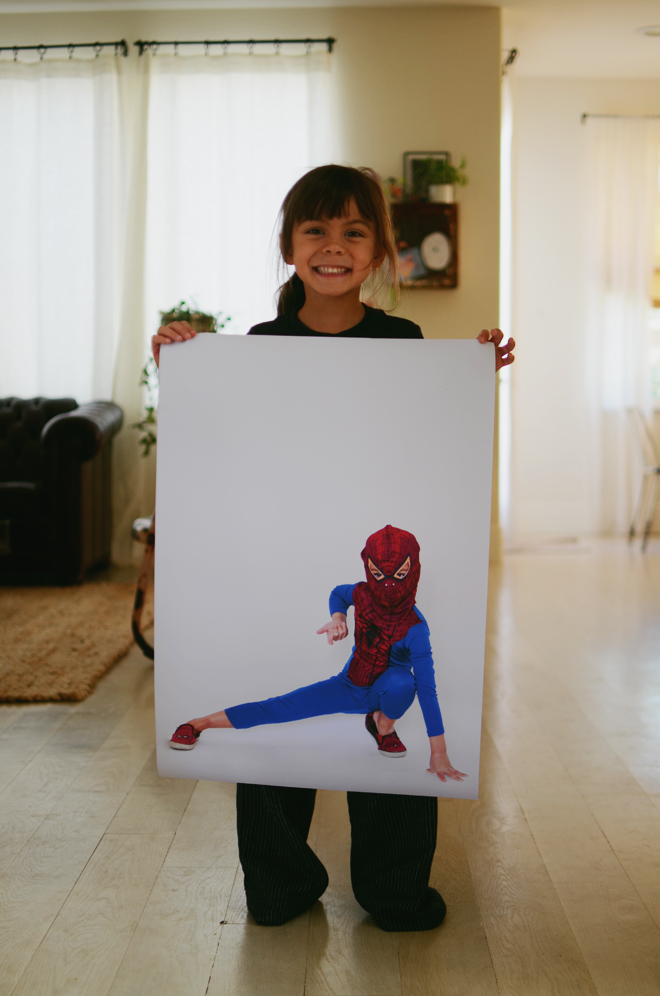 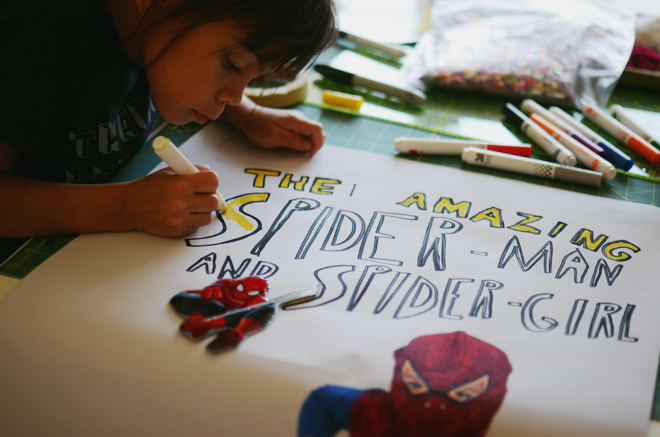 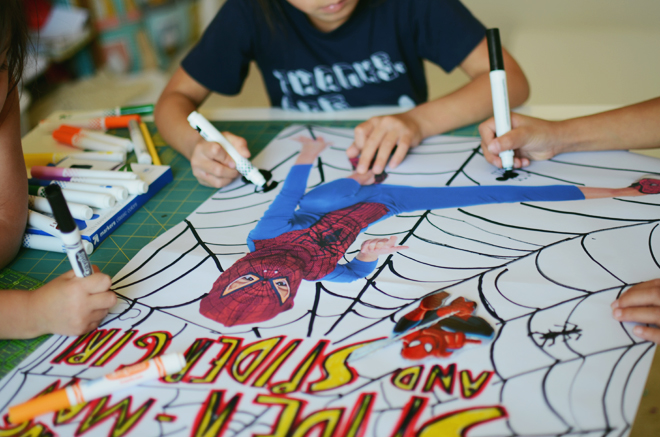 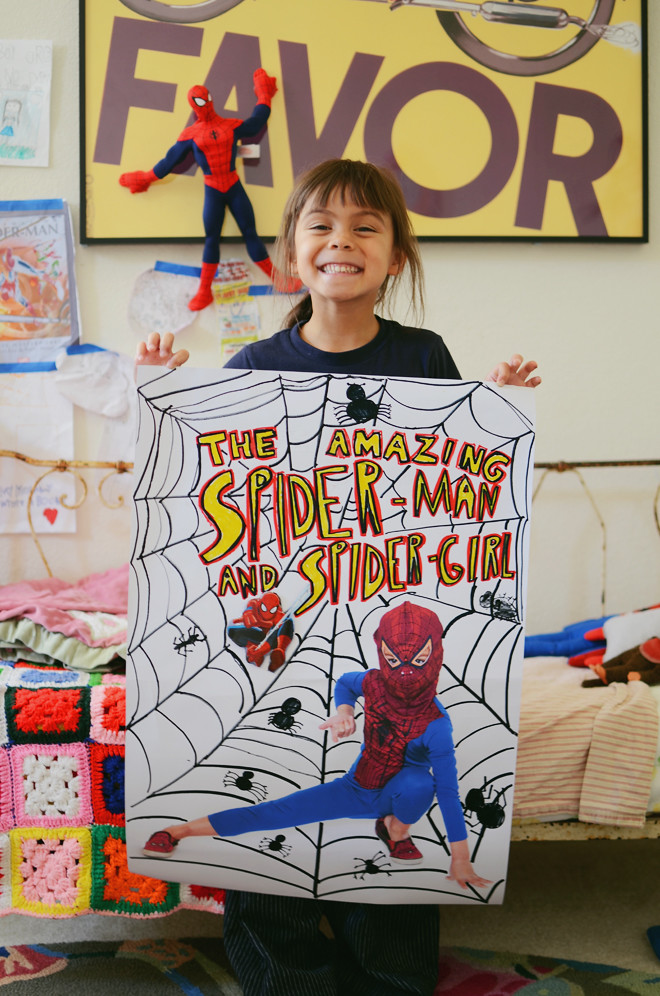 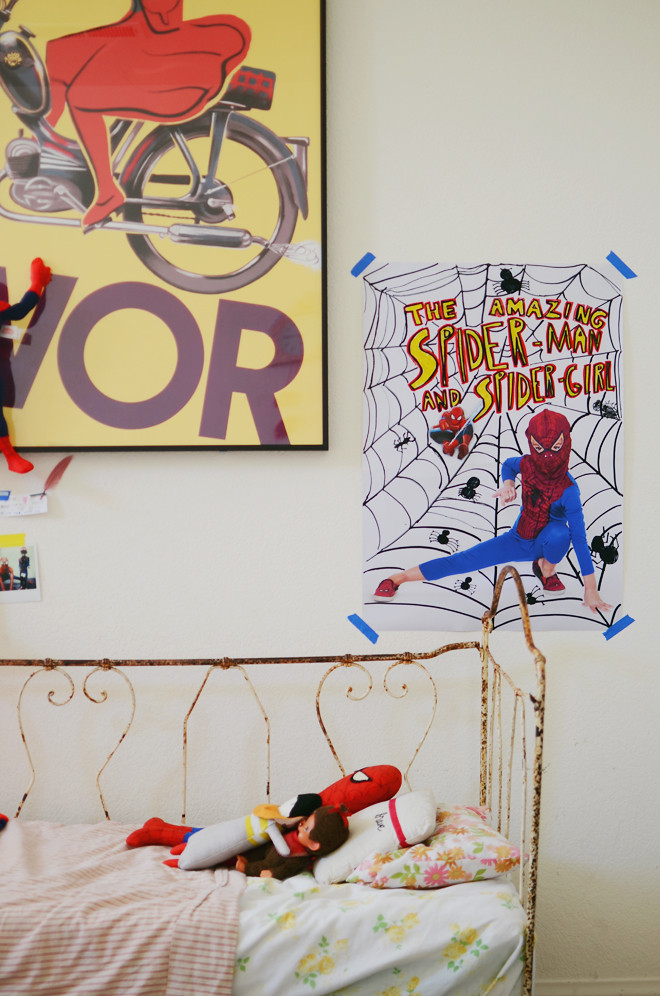 I asked Brave, “Why do you like Spider-Man so much?” She replied, “Because he’s cool, climbs walls, and he’s brave.”

This Spider-Man thing is very unique to her and I think it’s really endearing how much she loves this red and blue masked hero. The other girls like him too, but not as much as Brave. It’s amazing to watch your children grow into their own unique selves. I think by nature since True’s the oldest, the younger girls would copy and like what True likes, but with Spider-Man, it’s the first thing that Brave latched onto on her own. It set her apart, and it’s this cute quirky thing that’s all Brave. Sometimes we still see the girls doing something just because True does it, but we tell them, “You don’t always have to follow True, you are own special person and it’s okay to be different.” And everyday we see how they are becoming their own special person.

Brave wanted to get a poster at the store, but I thought it would be cute to make our own. I had her get in her Spider-Man costume (hers is Target from a few years ago when we did this Halloween story) and do her best Spidey poses. We took a picture in front a plain white background, I brightened the color up in Photoshop, and saved it to the poster size I wanted. We went to our local copy center to get it printed and there you have it, we had our own Spider-Man poster. This oversized print cost $22, which is more than a store bought poster, but we get to make this special for her, so it’s worth it.

I started off the first letter on the poster, and I let her complete the rest. She made a couple mistakes, but they blended right into the web. She’s Spider-Girl, so we cut out an image from the Spider-Man pose doll box that she saved and attached that on. After she did the lettering, the other girls joined in on the coloring. I helped get the web started, taught them how to do it, they finished the rest, and added a whole bunch of spiders for good measure. Now, she has her very own special Spider-Man and Spider-Girl poster. We put it up next to her bed and it’s very clear which side of the room is hers, you probably saw a glimpse of it in this post.

True’s now asking to make her own She-ra poster, so I guess that’s the next super hero on the project making agenda. As the girls get older and into cartoon characters, we’ve learned how to incorporate our love for handmade things mixed in with regular store bought toys they love so much, both mom and children end up quite happy with the result.

This post is sponsored by Target. More Spider-Man, More Amazing: Blur the lines of fantasy and reality with your favorite superheroes at Target. Thank you for your continuous support of this space and the collaborations I choose to be a part of.

14 comments on “it makes her unique”