so long television (and a family room tour)

Recently, I was talking to a friend and she told me how her friend liked our house and vintage furniture, particularly our vintage television. Well now, it is not exactly vintage, but we haven’t yet succumbed to a be a flat screen television family.
Our television is about 14 years old and was bought by Ben when he was a bachelor livin’ it up on the east coast. It has moved from D.C. to Texas to California and followed him into married life. It has been great and thus have never thought to trade it in for the ever popular flat screen. It is funny because when most of my friends got married, a television was usually the first thing they purchased, but we didn’t cause we already had this trusty square tube. It has worked fine and dandy and my only qualm is that it isn’t easy to hide. I personally don’t think televisions (flat or not) are that good looking and it is not my preference to mount it on a wall to be a focal point (I would much rather have it hiding in a cabinet).
So here we are today and our television bit the dust a week ago. It became a teleaudio as the vision part when kaput! We have tried different things to fix it, but it just wouldn’t bring back the vision. Now I will admit, I did a little happy dance when it bit the dust because tv’s aren’t that cute (that’s why it never gets photographed), but also because we finally could get rid of another piece of new furniture in our house (most things are vintage and that ikea tv stand was one of the few new items left). Also, I have been saving a vintage, french pie safe to put in place of that stand that would be perfect for the one day we would get a little flat screen. While I would still prefer to hide a flat screen in a vintage cabinet of sorts, propped up on a cool vintage pie safe is good enough for me!
My family came over yesterday for dinner and we had all the boys lug that television out of the house, as well as load the ikea stand in my parents car bound for their house, so we immediately brought the pie safe down. It is now in place with nothing on top. Currently, we have no plans to get a new television because those things are just darn expensive and we have got certain bills to pay before we could make that purchase. We will be tv-less for now and that idea is kind of exciting to us. The only thing we really watched were Spurs games and Food Network, which is what I will miss the most because my girls get super duper excited watching their favorite chefs in action.
So in honor of our television, I thought I would give you a little tour of the family room that it lived in. You have seen it here and here before, but I do change tiny things up from time to time and thought I would share it before it changed slightly again. Plus, I did get a cool vintage piece at the Found & Oh hello friend yard sale (thanks Jenny for the awesome trade!) that I can’t wait to clean up and get in this room.
Without further ado, say hello and goodbye to our television… 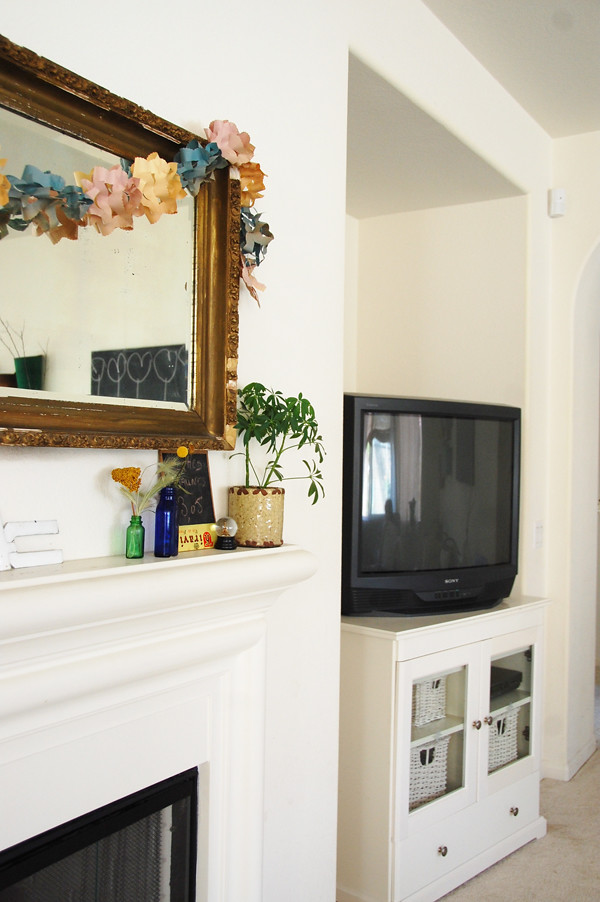 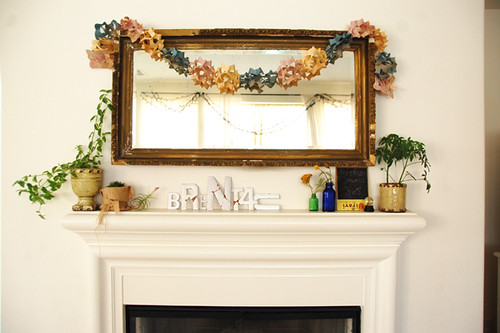 The chalkboard canvas holds True’s latest installation and there is my Bravey playing by herself because she was in time out. Next to it is my collection of vintage sap buckets. I always love me a big pop of color! 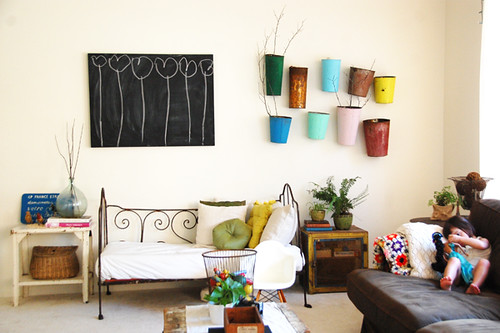 And yes, that is a white, child sized eames chair there in front of the iron bed/sofa. It is a good looking kid chair!
Our vintage rolling industrial cart/coffee table that holds our family sketchbook, along with an old trash can full of bocce balls, a plant, and a vintage brownie camera. 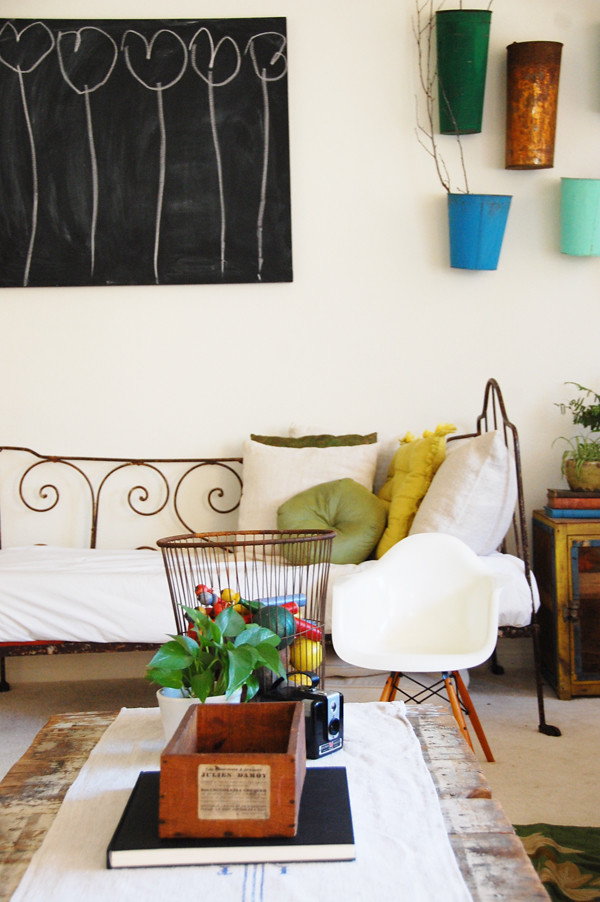 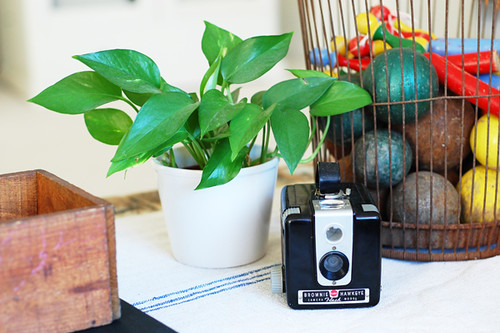 In the back, you could see our breakfast area and the beautiful sunflowers Ben and True surprised me with on Sunday. We also don’t have proper lighting in the family room, so we use the strung up Christmas lights along the curtain top until we figure out what we want to do. It will probably be up there for awhile. 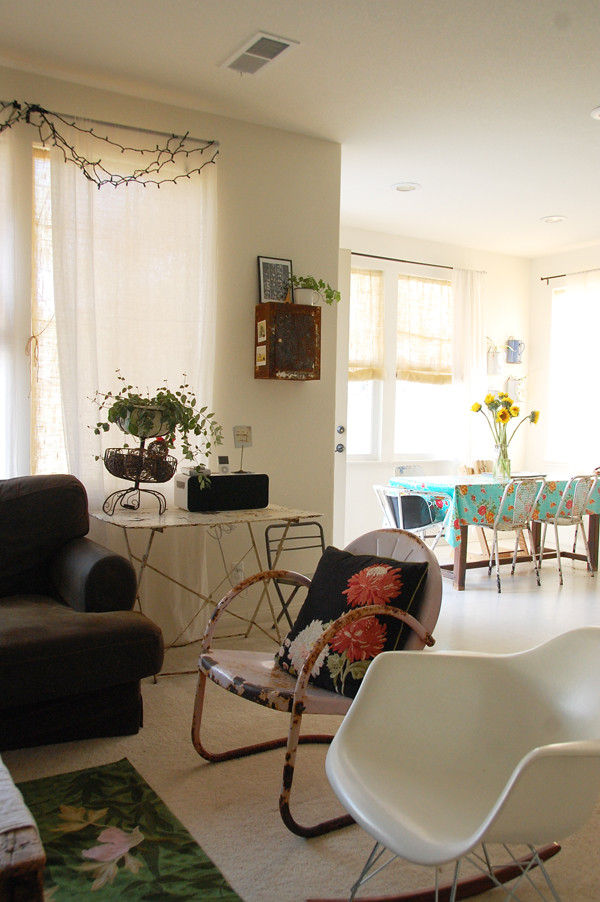 I really love using outdoor furniture inside, so that pink lawn chair is another one of my favorite things.
A vintage medicine cabinet holds a plant, photobooth pictures from True’s 4th birthday, and a wooden eiffel tower. 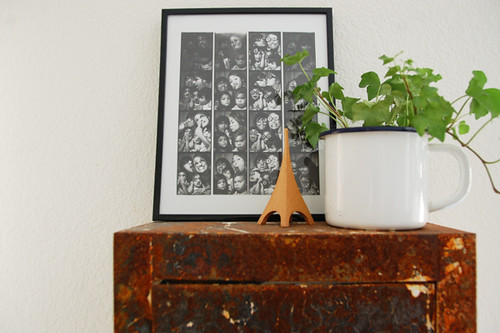 And alas, the little cove with a vintage pie safe and no television… 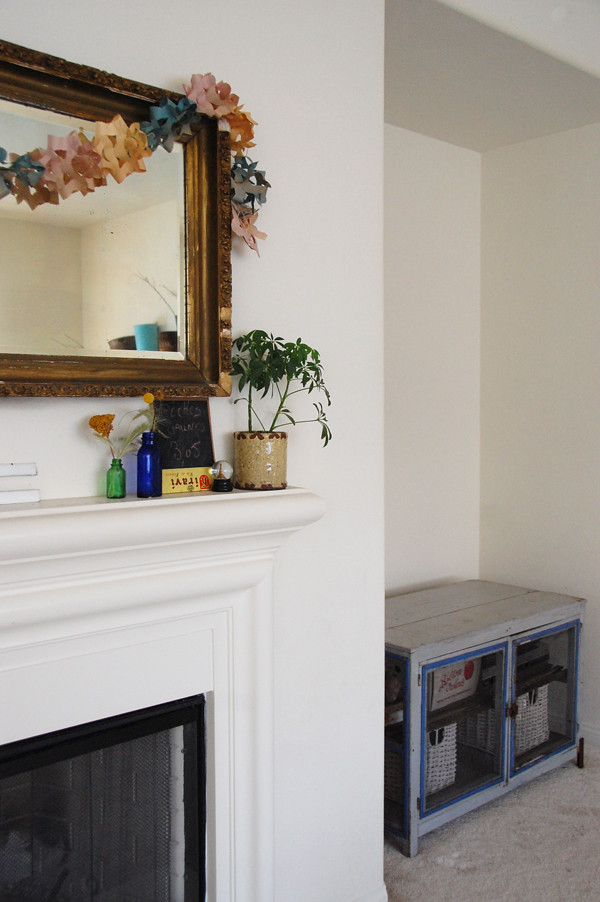 The little cove looks strange and I am not sure what to put on top in the meantime, but it is kind of nice without a television. We aren’t that much of television people anyways, so maybe we may never get one! Heck, I get my world news from all of you via reading your blogs or your emails!
This weekend has been pretty crazy with the yard sale and a wedding on Saturday, then Sunday we had to take True to the doctor because she had a bug bite that had swollen 15 times bigger than what it was earlier in the week (she has antibiotics now), then my family came over for dinner Sunday night and Monday was spent cleaning and purging. Not much time left for resting and tomorrow it is back to work for Ben and we will be counting down until it is time for him to come home.
Oh! And just tonight my camera has decided to act up! Ben thinks I am messing things up to get new things, but that really isn’t the case. I don’t want to have to dish out money for a new camera just yet, so let’s hope that my Nikon d40 can hang in there just a wee bit longer!
How was your weekend? Was it much more low key than ours or did a couple things go kaput on you too?!!

23 comments on “so long television (and a family room tour)”