the day we just rolled with it 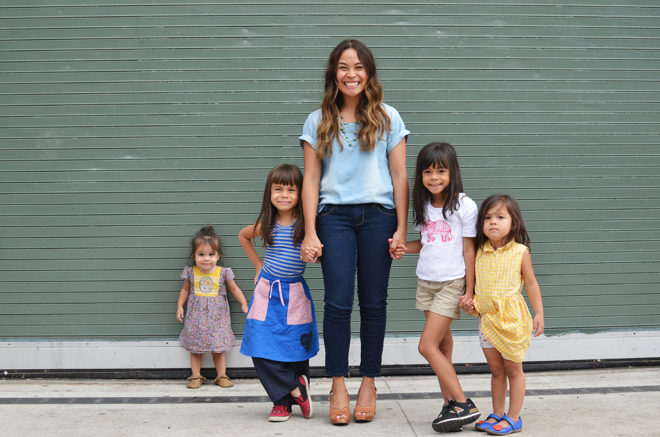 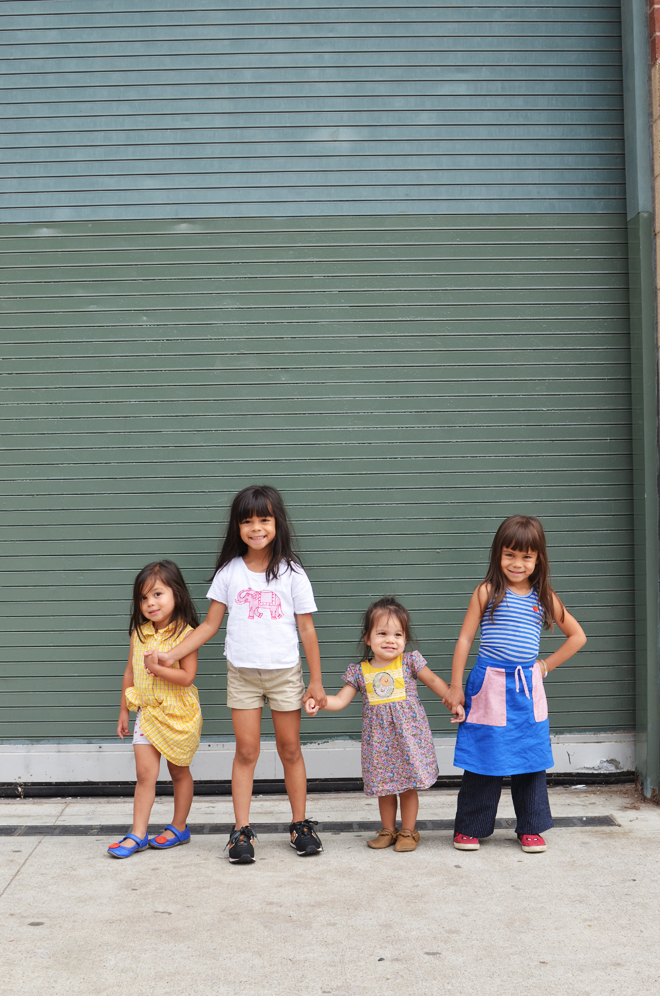 I love taking these pictures together because it documents the phases the girls go through. It was a typical Sunday morning and I yelled, “Get dress!” And the three big ones proceeded to dress themselves. True changed her shirt twice, Brave decided to layer a skirt over pants (sure, why not!), and Soulie put on a dress. Then, I reminded her she needed to put shorts under her dress (it’s a rule here to wear shorts under skirts or dresses, so they can freely play and not worry about showing their underoos). Well, she comes back with her dress tucked into her shorts and that’s that. It wasn’t what I had in mind, but it’s her thing. I think it’s been her thing for almost a year now. I don’t correct it because it’s funny and cute, and she’s figuring herself out through it (plus, with Soulie, you really have to be careful about what battles to pick), so it’s cool. Glow’s the only one that I can still dress to my liking. She’s easy. 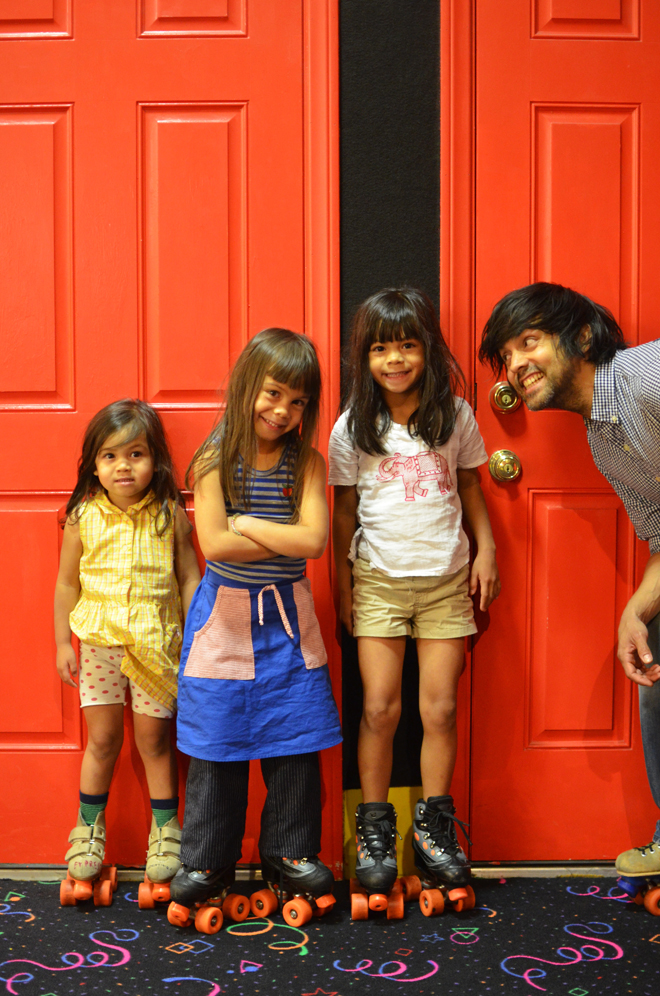 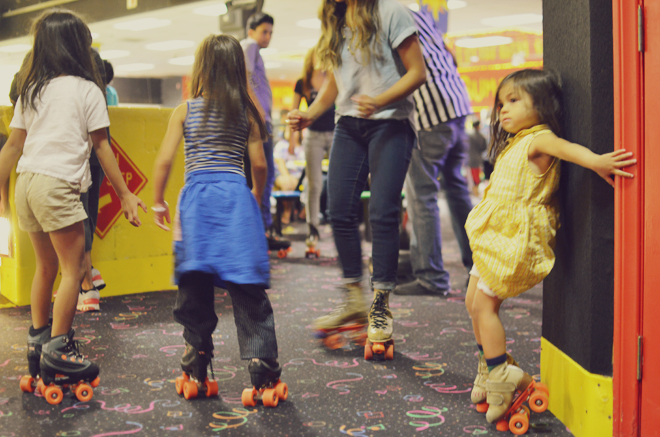 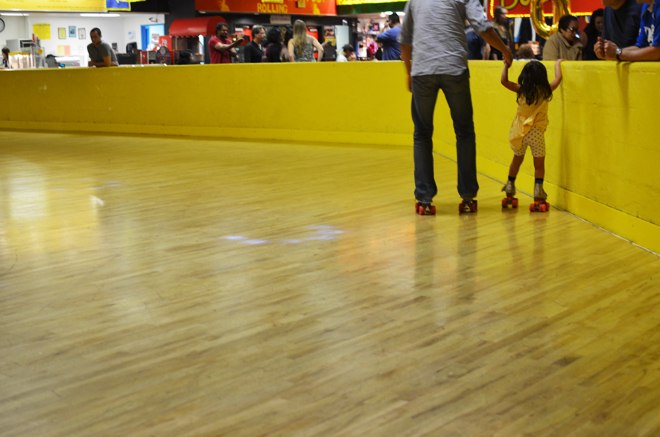 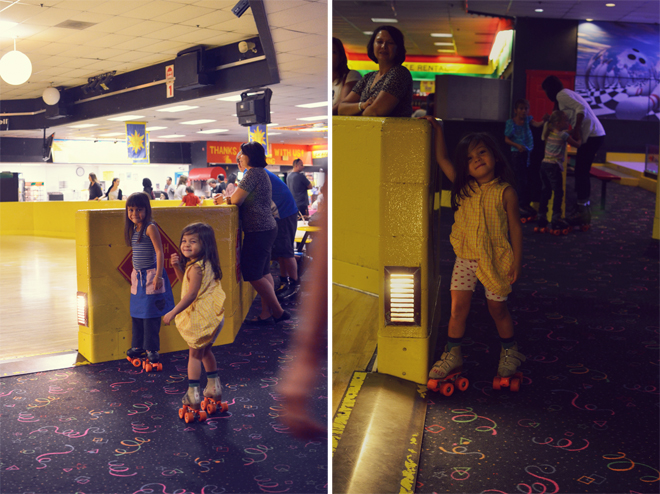 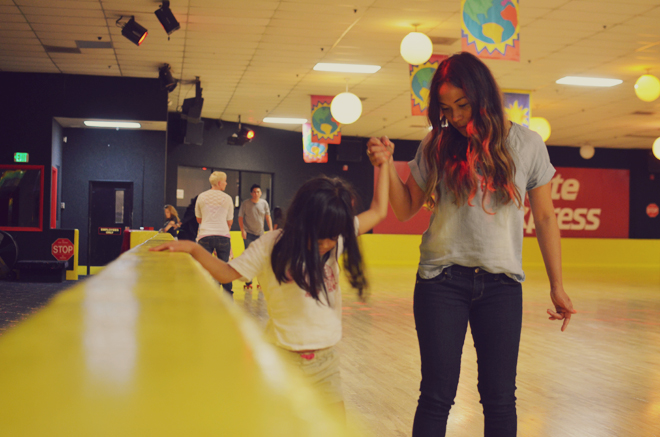 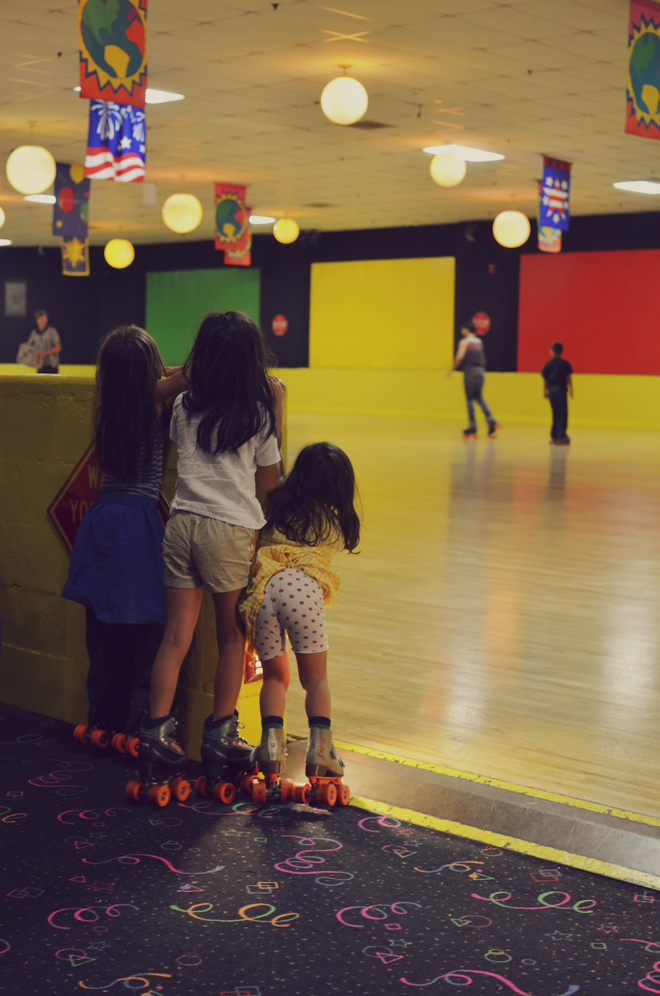 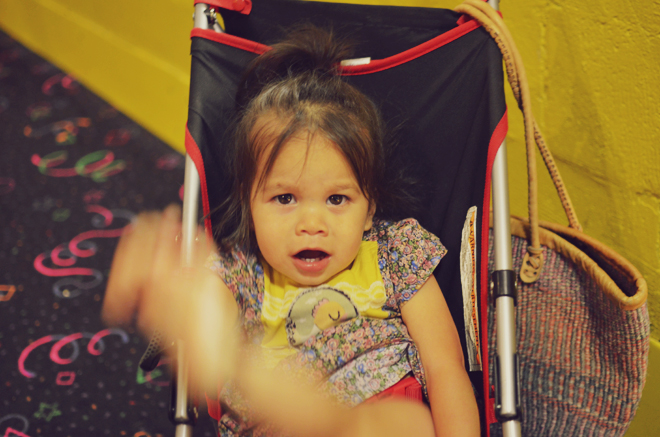 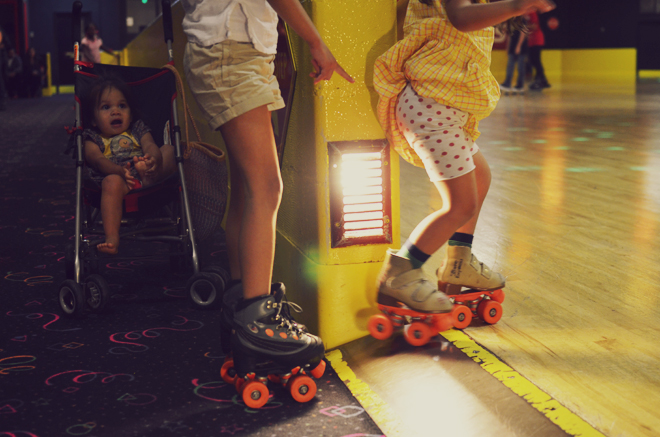 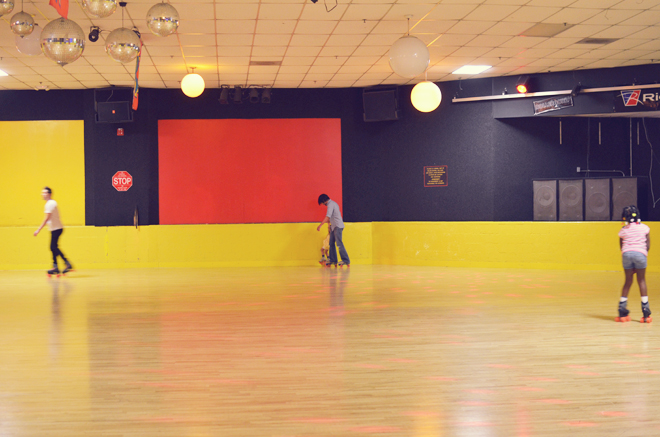 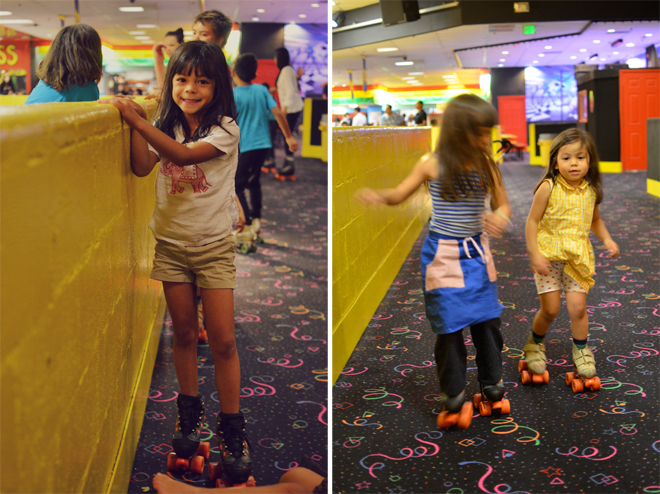 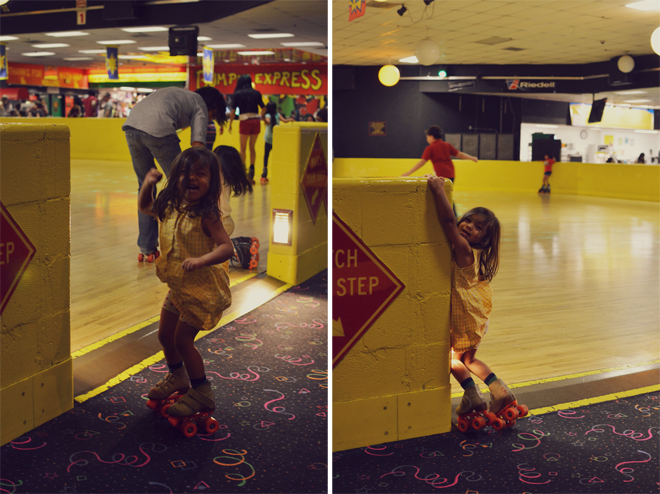 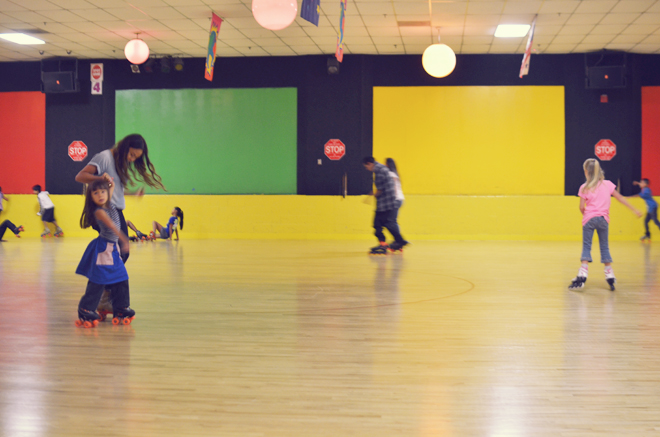 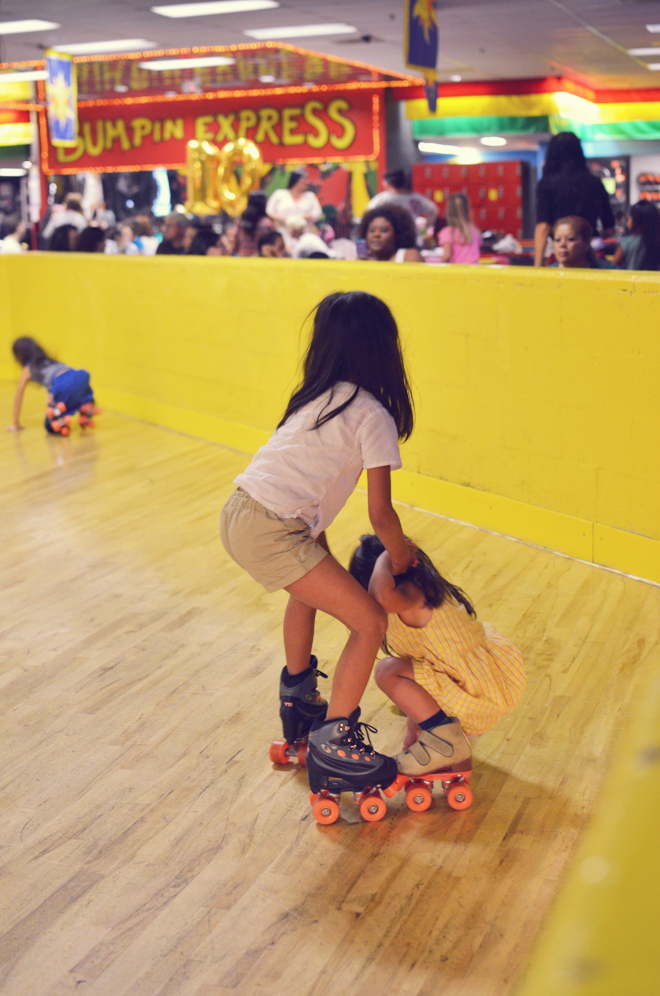 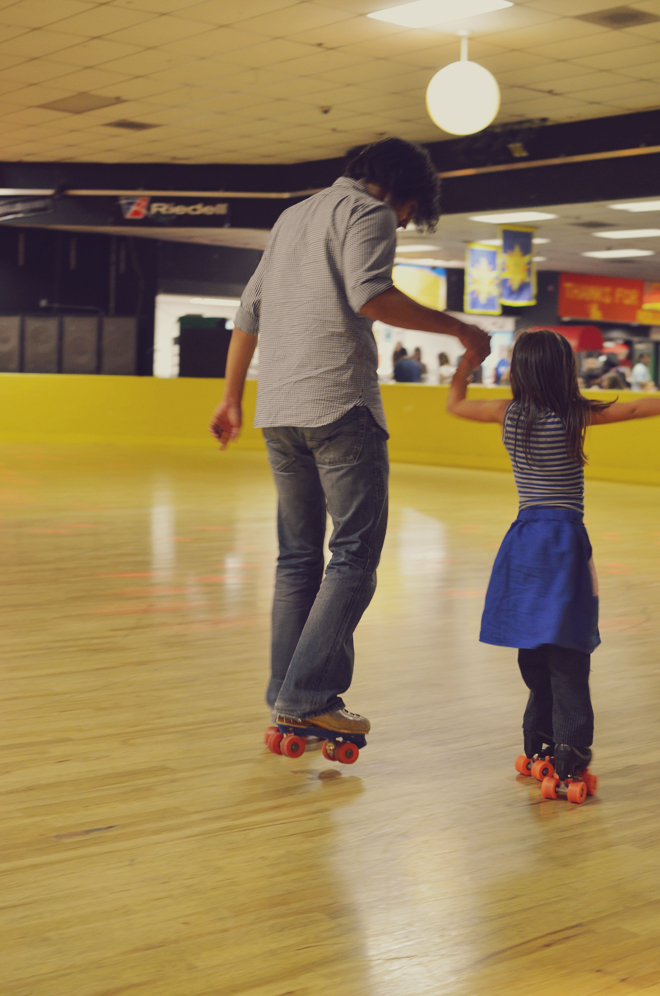 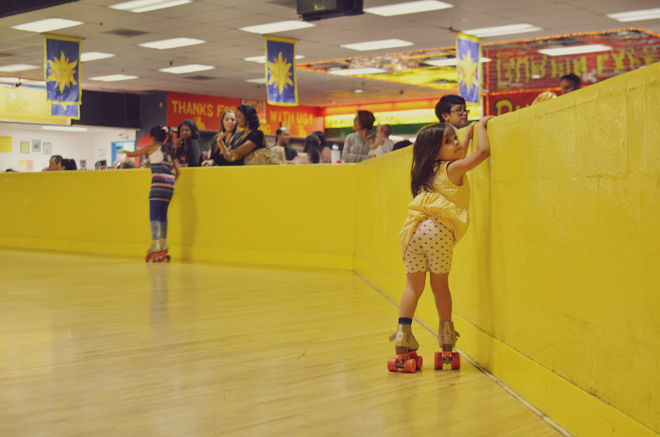 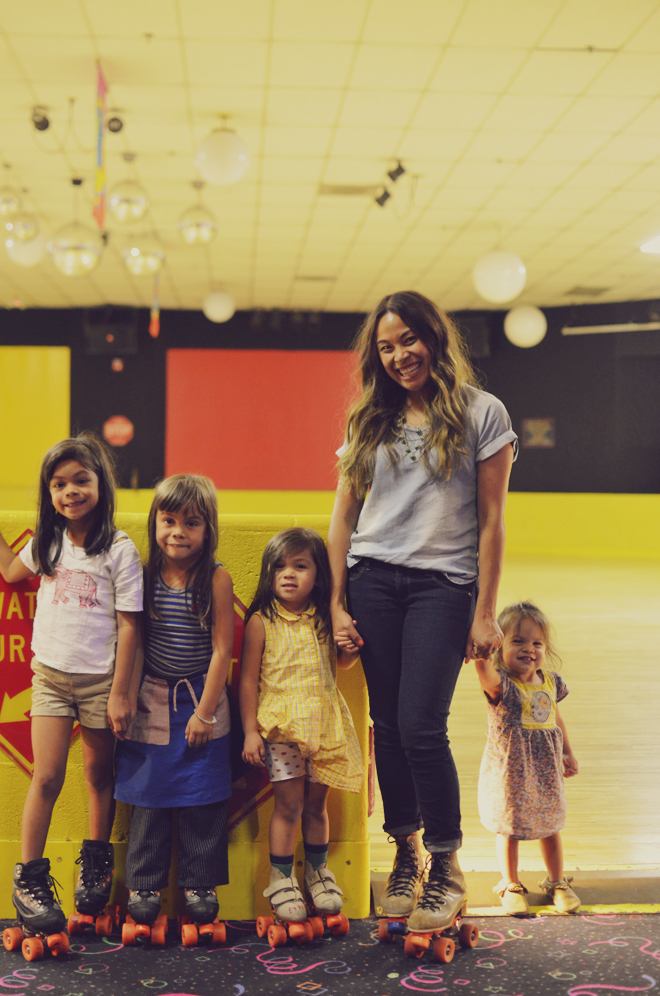 Ben and I aren’t particularly spontaneous people. We usually always have a plan and I like to talk about it first thing in the morning, so I can mentally prepare myself for the rest of the day. This day though (on our way to gather with our church family), all of a sudden I said, “Let’s take the girls rollerskating!” Ben said, “Okay!” I looked at him and said, “Okay?” He said, “Yeah. What made you think of that?” I told him I just looked down at my feet and thought of rollerskates. HA! That’s as spontaneous as we get folks!

Therefore, that afternoon we took the girls rollerskating. We didn’t have socks on, so we went to Target, I ran in and bought some (we were in need of some anyways), and we headed to the skating rink. The girls had no clue where we were going and when we pulled in front of Skate Express (they can read the sign now), they were still confused. We get inside, pay admission, pick up rental skates for everyone (except Glow), and by now, they get it. Their faces were filled with excitement and nervousness. We had no clue how they would react or how they would do since this was their first time ever being on skates, but oh well, we were all going skating!

After everyone got their skates on, I took 2 solo laps around the rink to see if I even remembered how to skate before I tried to get out there with one of the girls to teach them. Thankfully, it all came back to me and I felt like such a kid again! I hadn’t skated at this rink since junior high and now here I was with my 4 little girls.  New memories were being made, while I was thinking about my old ones. It was a special moment for me.

I came back to the girls and said, “Who wants to try?!” Soulie was the first one who wanted to get out there, and she did surprisingly well. She held my hand, we stayed near the wall, and she just kind of rolled. I definitely did give my right arm a good work out as I had to hold her (and the rest of the girls) up. It was Brave who wanted to venture out next, and then True. Glow had to stay in the stroller while Ben and I took turns getting out in the rink with the girls. We did some practice lessons on the carpet, and I told them to point their toes out (skates in the shape of a V) and take tiny steps. They kept practicing and they kinda got the gist. Eventually, the three girls were off on their own as they held on to the wall and went around the rink. The smiles were so big and they were quite proud at their ability to do this. Even that little Soul, who was the tiniest wearing skates, insisted on going around the entire rink on her own. Their faces were filled with sheer elation as they skated around!

We stayed the whole session because the girls didn’t want to leave, and we ended up leaving at what was normally their bedtime, so we grabbed some fast food for them because they were starved by the time we left. Ben and I were surprised at how much we were able to just roll with it ourselves and it was kind of refreshing being spontaneous. It was just such a good day for memory making with our girlies. Here’s to trying to be spontaneous more often!

16 comments on “the day we just rolled with it”