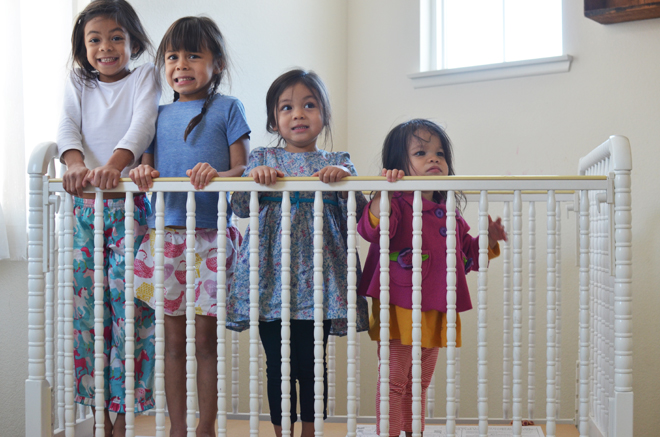 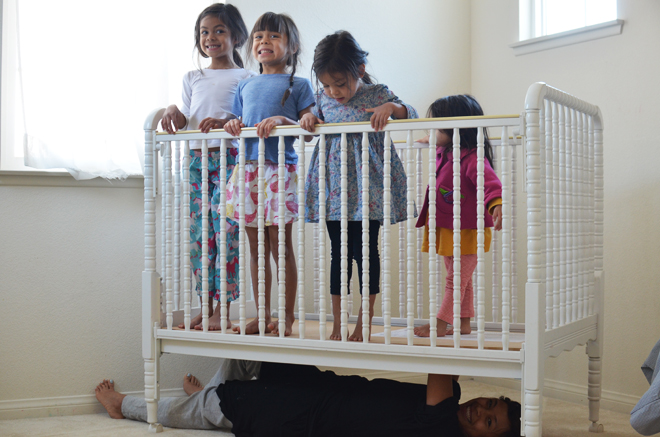 We broke down our crib and gave it away. Glow never slept in it (she’s in the play yard) and she refuses to, so it was time to move it on. I kept meaning to put all the girls in it to get one last picture, but Ben started taking it apart before I got to do that. Once I realized what he was doing, I told him to pause so we could at least get one last picture. He took enough parts off that it was going to take work to get it back together, so while the frame was still together and the bottom was the part the piece that was no longer attached, we figured out a way to still get a picture taken… I kinda held it up using my arms and knees, all the girls went in, Ben quickly snapped a picture (I did the holding up because he has an injured rotator cuff), and then we quickly took them all out. Times like these make me thankful for the early morning workouts I do alongside Ben.

As you can tell by Glow’s face, she didn’t like to be in it, and she probably didn’t need to be in the picture since she never used it like the 3 bigger girls, but I still wanted to stick her in. This crib has been with us since True was born. It’s given us lots of memories and it’s where our three big girls have learned to put themselves to sleep. It’s weird getting past the baby stage as I feel like we’ve been here for years, but I’m looking forward to it. Nervous about how time fast will fly, but I’m trying to be present in the moment. Trying is the word; it’s hard sometimes.

I will admit, these past few weeks have made me crazy mama getting ready for the holidays, battling sickness, and keeping up with the girls. This week I have been especially cranky (could be because it is that time of the month for me), but I feel so bad as the girls bear the brunt of my craziness. True even left Ben a note by the front door to see when he got home and it said, “Papi, mommy is yelling again. And she called me a brat.” For the record, she was acting like a brat. Obviously, this week was a whole lot of not being present in the moment, but with school done for the year and everything set for the holidays, I think these next couple weeks should Lord willing be much better. Ben’s off for the holidays, so having him around helps keep me sane and sharing the load with him is so much better. Plus, we will be with family, so there will lots of extra and willing hands to help with the girls. We’re off from dance and swim classes, school won’t need to be done, and it will just be lots of enjoying the season together as a family.

Despite me being crazy, the girls are still as sweet as ever and I better cherish that now because one day they’re going to know how to give me attitude back (and they probably will have learned it from me unfortunately). Anyone else feeling crazy lately?

11 comments on “i’m sentimental and crazy”