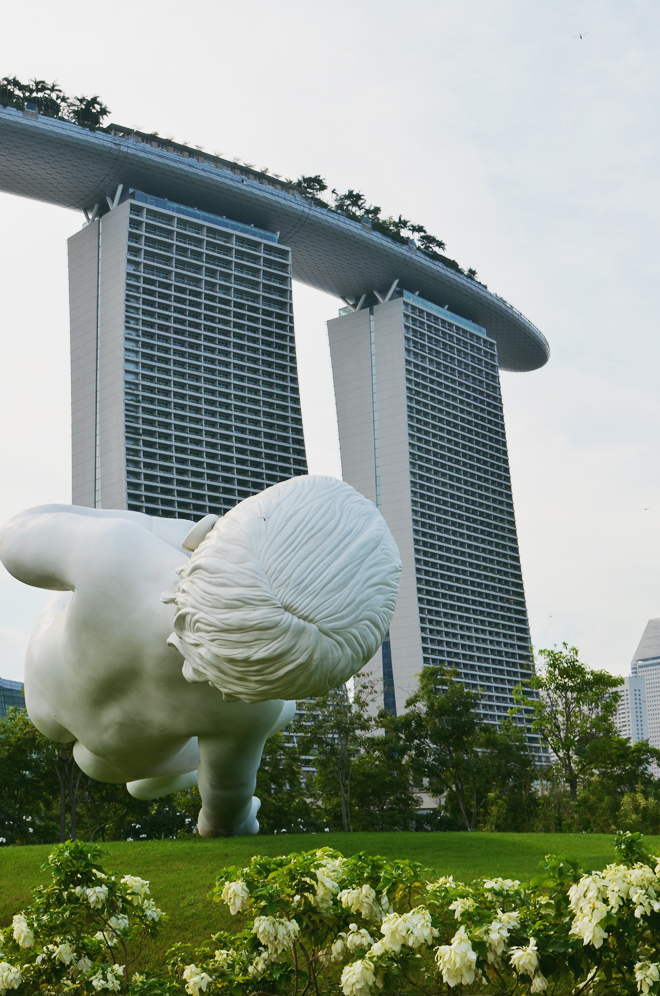 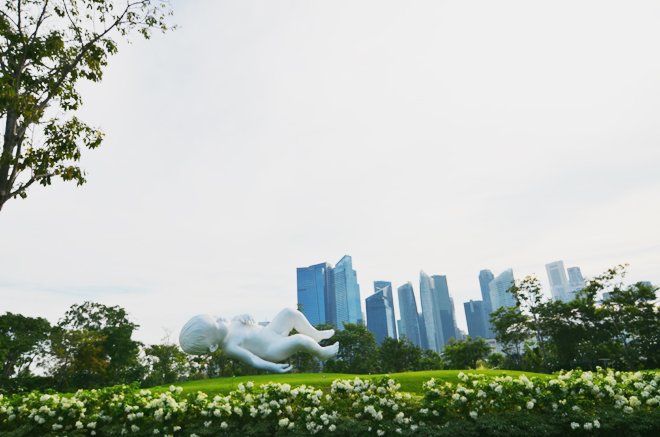 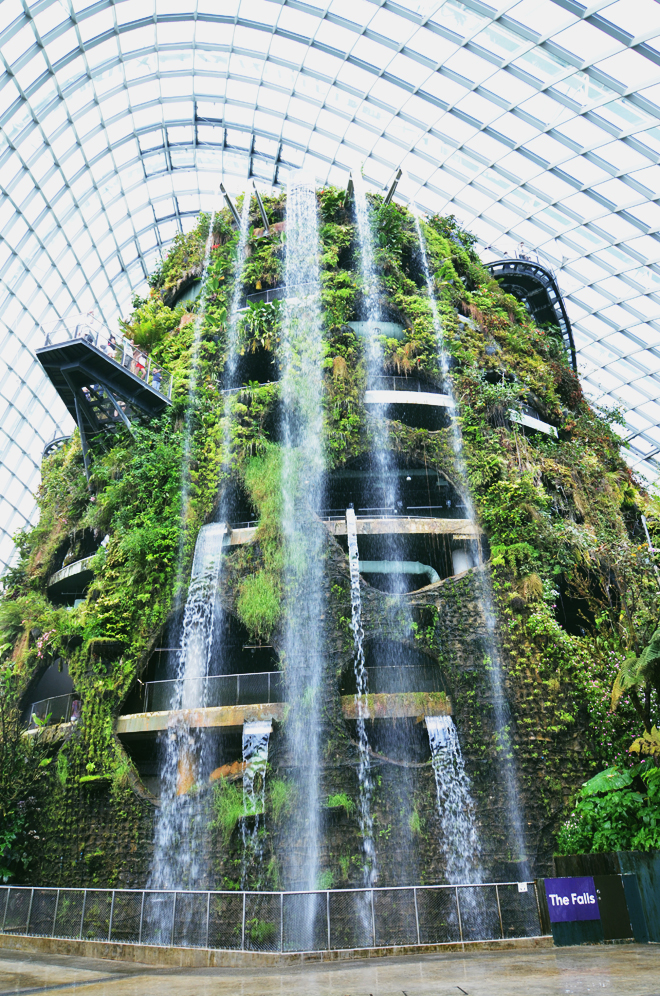 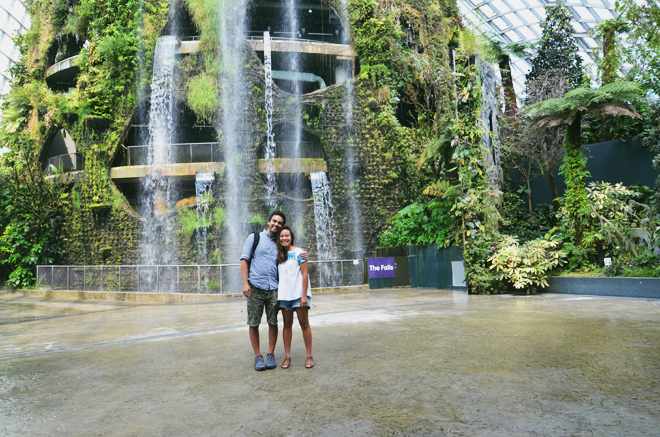 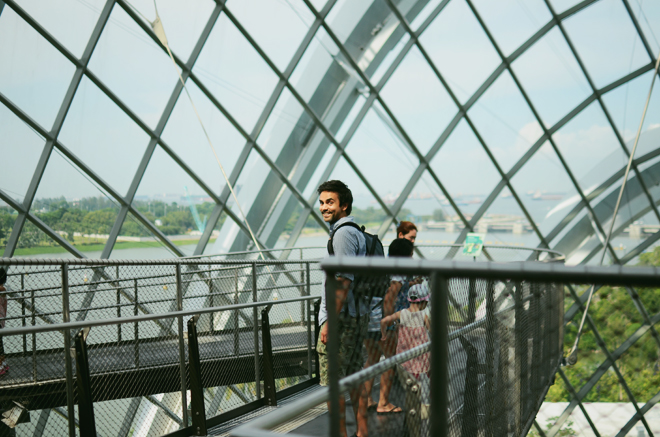 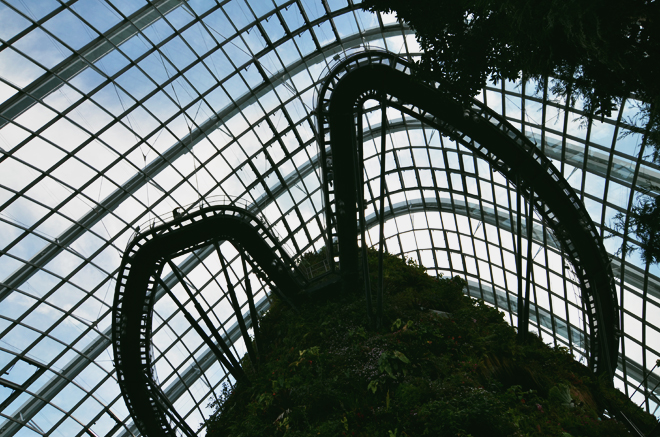 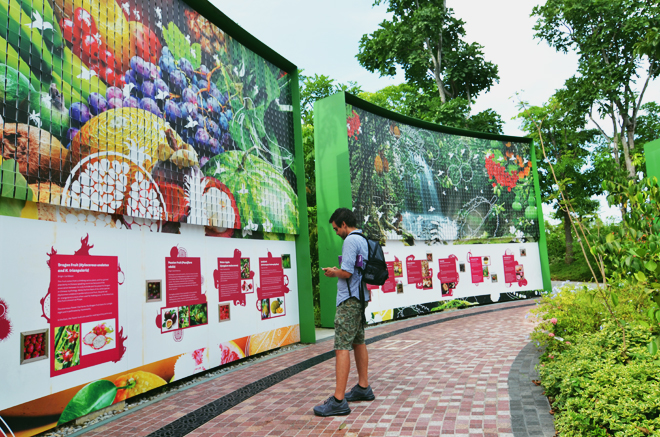 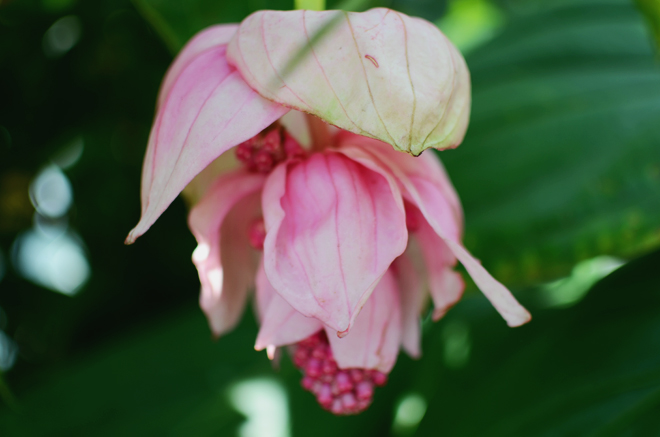 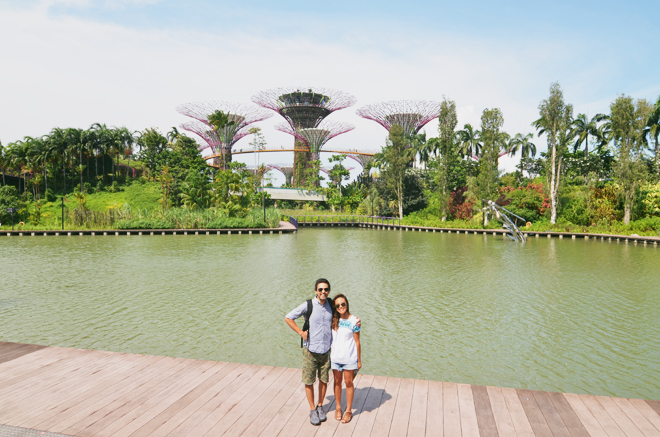 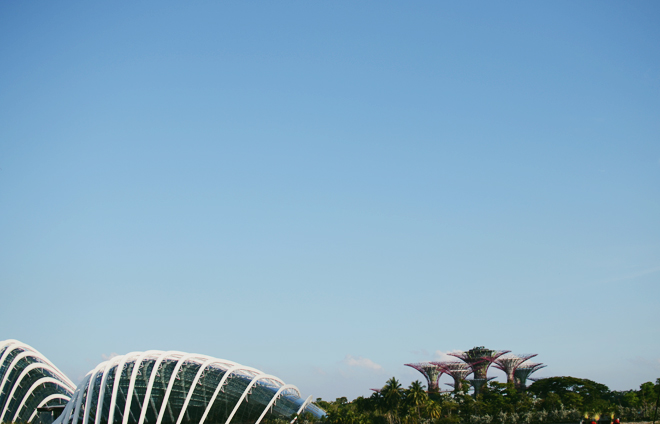 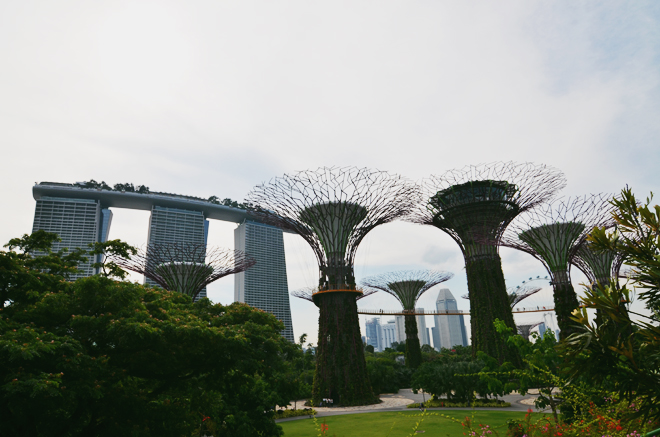 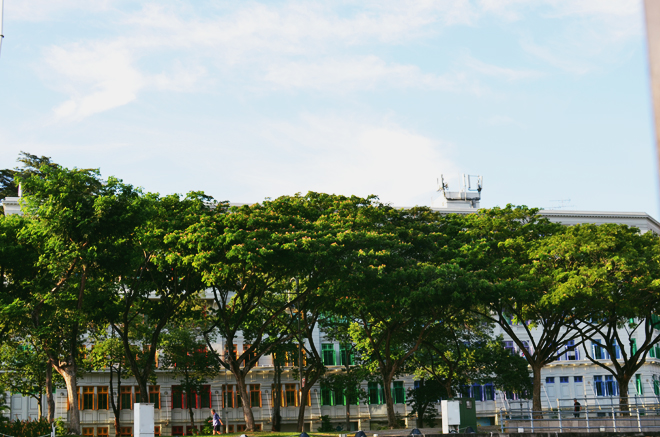 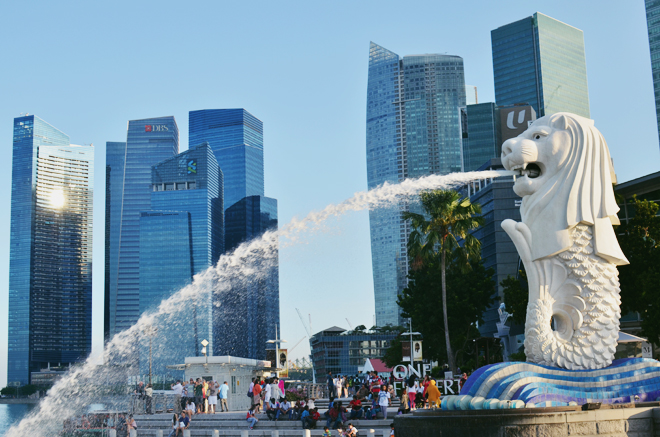 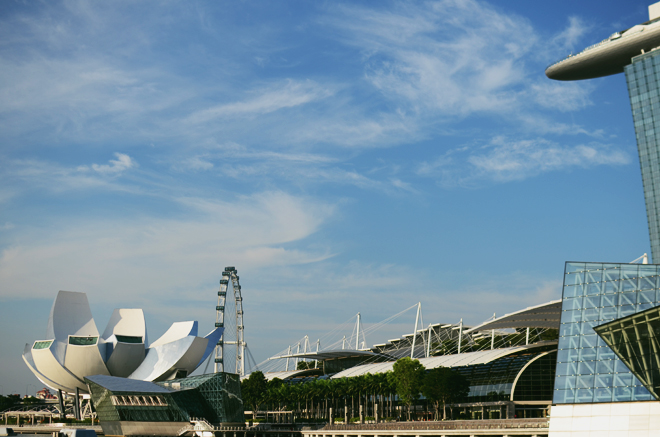 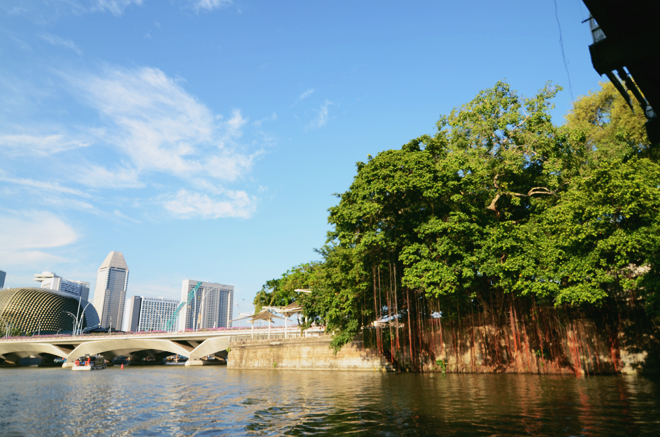 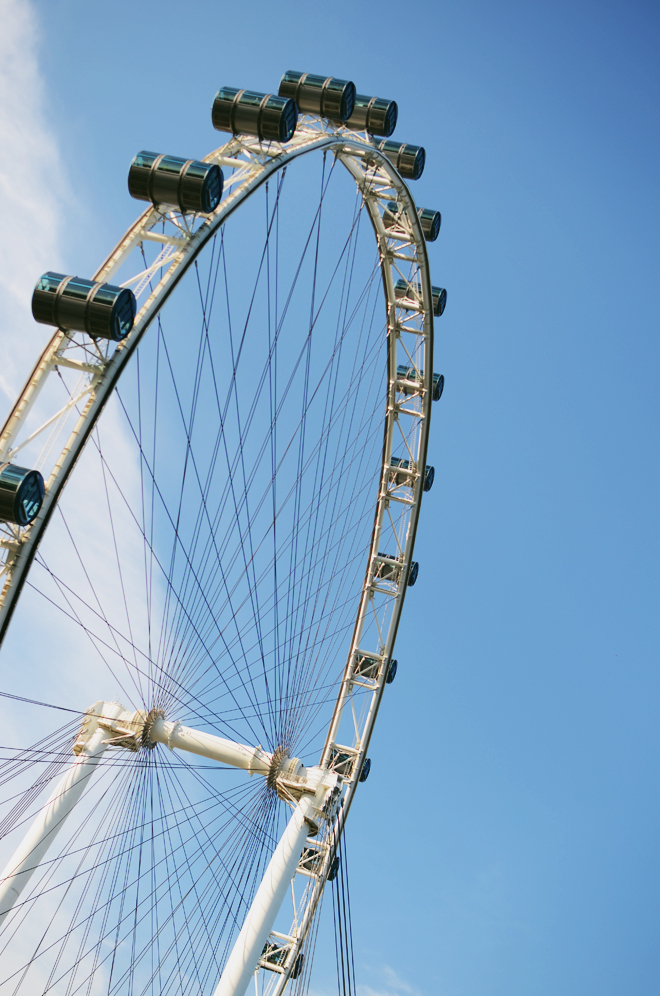 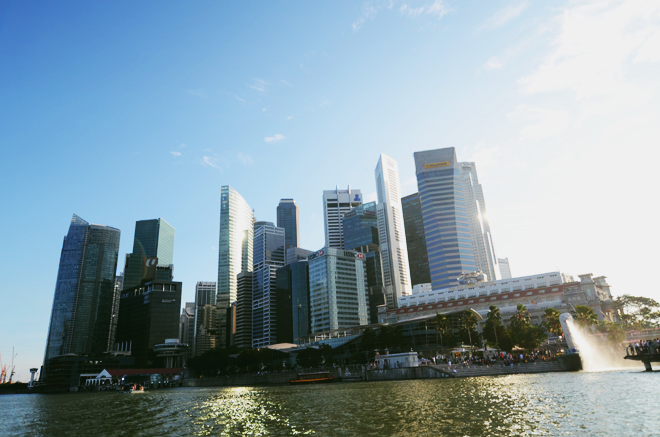 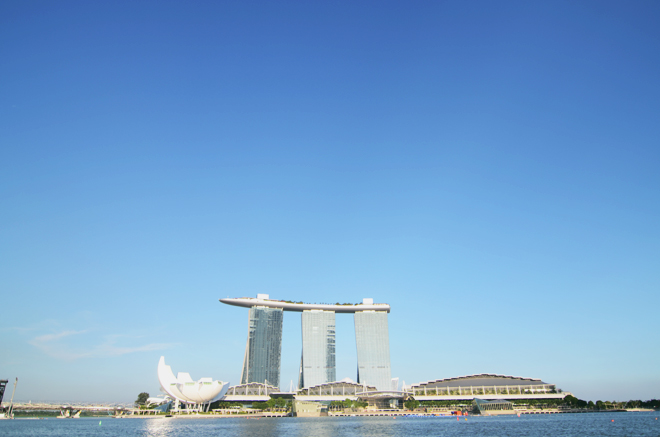 Gardens by the Bay: Such an expansive garden and there was no way we would be able to cover it all, but we walked around until the heat and our legs told us we had enough. Ben really enjoyed the fruit tree section of it and was reading up all he could, and he would look up additional info on his phone to find out more! There were so many plants I wanted to bring home, and The Supertree Grove is so cool. I wanted to walk across the suspension bridge, but after Cloud Forest, Ben was not up to being so far up from the ground.

Cloud Forest Dome: This was this amazing (air conditioned) indoor conservatory with lots of beautiful greenery and a man-made waterfall. You go all the way to the top and walk down, but Ben was freaking out because you can see through the walkway that leads you down (and you’re pretty high up), so he was walking as fast as he can. You can totally see his nervous face in the picture; he was freaking out so much that I started freaking out.

Singapore Flyer: This is Singapore’s version of the London Eye. We went to go see it (and think about riding it), but once we got close, that was good enough for Ben. The thought of being trapped in that thing for 30 minutes was making him uncomfortable. HA! We made a deal though, we would skip out on the flyer, but we would go to the Skypark at Marina Bay Sands (the towers that look like it has a ship on the top) to see the view. He agreed, so I was happy with that deal.

We also took a tour on the river (thank you to one of you for the suggestion!), and I’m so glad we did that because we learned a lot about the history of this beautiful country. I enjoyed hearing about the how this was once a bustling seaport, how the British came to conquer, and the influence they had in developing this country. I loved imagining what it might have been like here long ago.

I still have so much to share about this wonderful sunny island; Singapore is so rich in beauty, diversity, and deliciousness, that’s it’s just not possible to contain in one post.