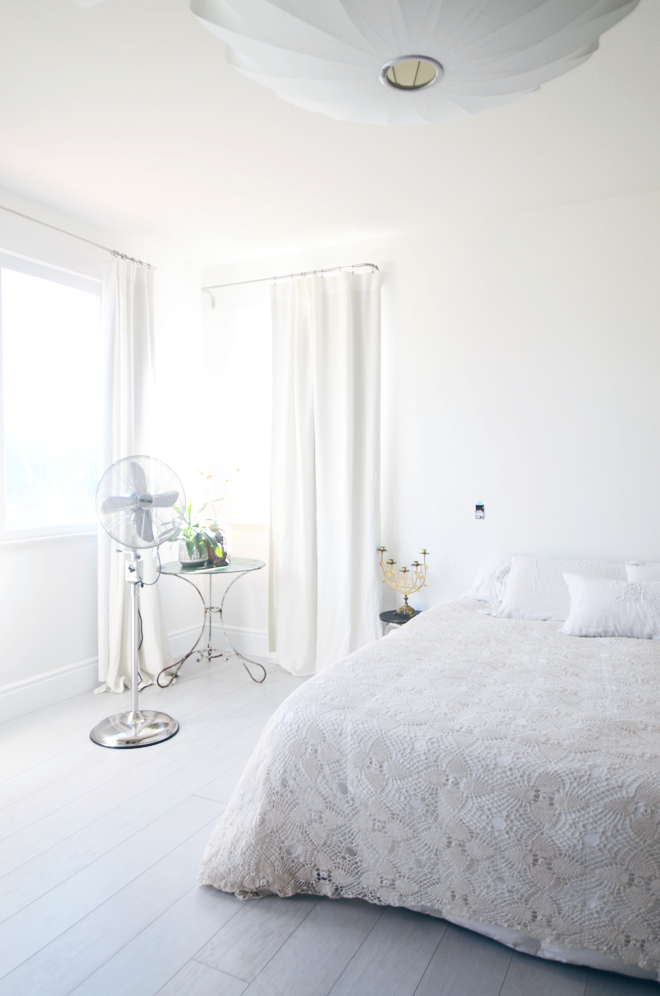 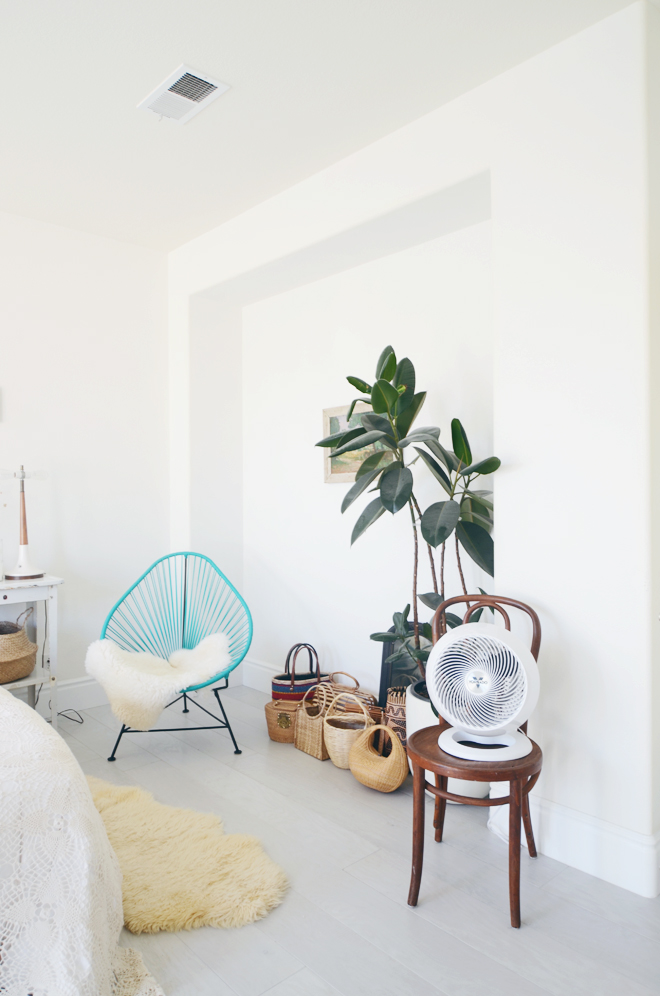 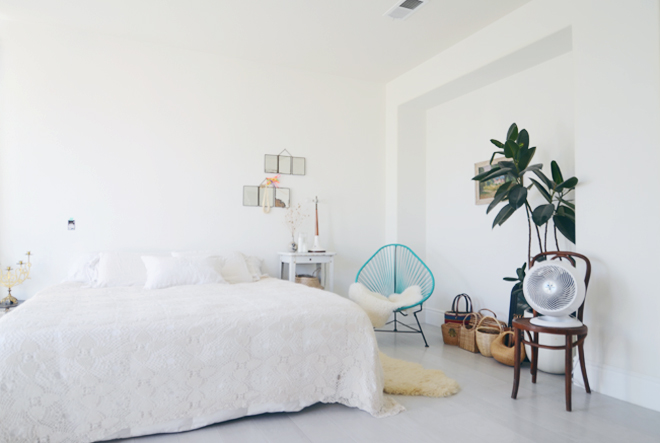 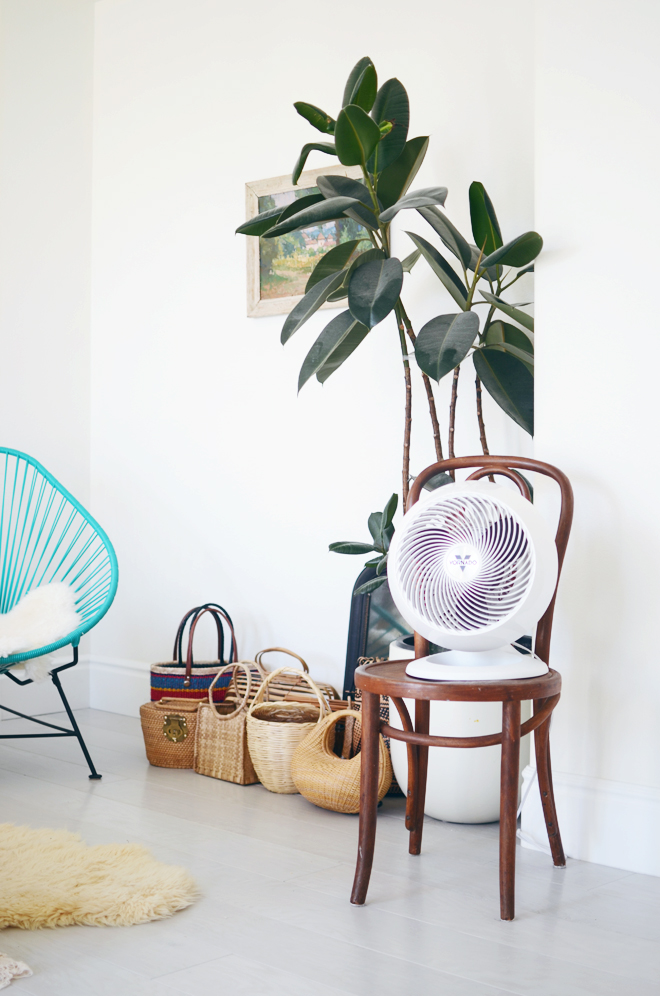 In the middle of last summer, our AC decided to quit, so it set us back about $1500 to fix. #ohthejoysofhomeownership Ben took a look at how high our electrical bill was, so he decided to keep the AC at a higher temp (84), and we mainly relied on oscillating fans to keep us cool. Ben is a researcher, so he researched lots of reviews for many fans, and so he settled on getting us this Vornado. We went with white and it worked well in getting us through our hot summer. Our electric bill stayed under a hundred during the hottest months of the year, which helped take a small bite of the cost to fix our AC. Don’t you love the irony though? We pay to get it fixed, only to no longer use it. I did complain many times during the heat because my fingers and feet would swell, so it wasn’t the most comfortable, but sometimes you have to sacrifice to save.

Now, I’m not a fan of how bulky fans look (pun intended), and I’m not really into the modern ones (like this) either. When Ben was researching, he was trying to find one that had solid reviews, but also looked decent and would blend with our style. I think the Vornado does a decent job at checking off all our boxes. Then, as I was going through my IG feed last summer, I spotted a good looking fan in this picture by @hidinginhere. I asked her about it, but she was staying in an Airbnb, and didn’t know where the fan was from. I did a lot snooping online to see if I could find it, but wasn’t sure if it was the one, so I contacted the Airbnb owner to find out. She was kind enough to answer my question and shared that she bought it several years ago from Restoration Hardware. After finding that out, Ben and I went to the site, and lo and behold, they had an updated version of the fan. Bad news though… it’s an online-only item and was almost $4o0 not including shipping, so we said, “No bueno.” Once we knew what brand the fan was, we started looking up ratings and reviews on it, and all of them said good things about the Allaire fans, but we definitely didn’t want to pay that price.

If you’ve been following here awhile, you know we can be patient and tend to internet stalk things we like until they go on super sale. Later in the fall, the fan price finally went down, but not nearly significant enough to what we were willing to pay. Then, the price went lower after that, but still not low enough. That happened a couple more times (ironically, with holidays having zero impact on when the discounts occurred), until earlier this month, where it finally dropped to a price that was closer to our budget. Ben still debated holding out to see if it would go lower, but customer service did let him know that if at any point it did go lower within 3o days of our purchase, they would do a price adjustment. We finally bit the bullet, and ordered a floor and table fan, and after using it for a few weeks now, we are very happy with our purchase. They are heavy duty fans (emphasis on heavy) made to last and the lowest speed on the 16″ is still higher than the highest on our Vornado. It definitely cools a room down and it’s not bad to look at either.

We started to look at the possibility of getting solar, but we aren’t quite ready to make the leap yet as we still have much research to do on it. For now though, we will be getting through the coming warmer temperatures with our Vornado on my side of the room and the Allaire on his. Even in the winter, we have a fan on for white noise. I wish we could sleep with the windows open to take advantage of the cool air, but Ben is very sensitive when he sleeps, so the outdoor noise (dogs barking all around) would hinder a good night’s rest for him.

Ben did his research and read plenty of reviews of fans last summer, so I’m glad to share our choices and our thoughts about it here, so in case you’re looking for a good fan for when the temps heat up, I think you’ll like the ones we chose. Get our Vornado fan here, and our Allaire floor fan here (we have the 16″) and the table fan here. We also purchased this small one for one of the girls’ room (had great reviews) and it indeed works well too. We also considered this Vornado, but decided it looked too retro for our home. Ben has always liked ceiling fans, but since I’d rather have vintage or modern light fixtures, there is no space on our ceilings for fans!

her seventh breakfast in bed


a robot in a pocket dress