And I may lose some readers over this… 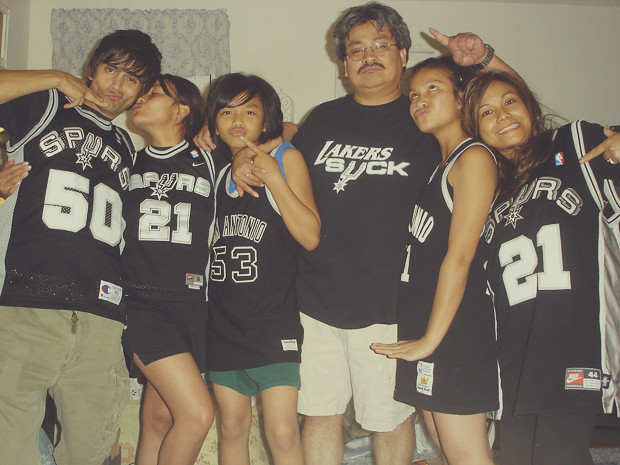 {circa 2005. my family all rallied together to show the spurs some support. they won the championship a month before we got married}

Yes, I was born and raised in the Los Angeles area, but I was raised by a serious anti-Laker fan. When my dad moved here from the Philippines when he was only 7, the first basketball game he ever watched was a Lakers-Celtics game. His family decided to be Laker fans, my dad, at the very young age, defied his family and became a Boston Celtics fan. I was raised a Laker hater.

Well, as a little girl I wanted to be a Boston Celtics cheerleader and I remember saving my monies to buy my dad a Larry Bird book at the school book fair. Then as a I grew older, I vowed to not marry a sports loving man because I got tired of my dad hogging the television when the games were on. It all changed when I met Ben. Ben is from San Antonio, Texas transplanted in southern California and he introduced me to the Spurs. As I fell in love with Ben, I fell in love with Spurs and basketball. I enjoyed watching basketball games and it stuck. In college, I used to even log into Spurs Talk to read all the discussions in the forums. The Spurs are such a classy organization and they were easy to fall in love with.

The fact that I was raised by an anti-Laker was a dream come true for Ben. For someone who detests them, but moved to a city of Angelenos, he kinda lucked out that he ended up marrying a girl who was raised under an anti-Laker. We’re kind of rare commodity here in southern California. If I had been a Laker fan, that may have been a deal breaker for him. 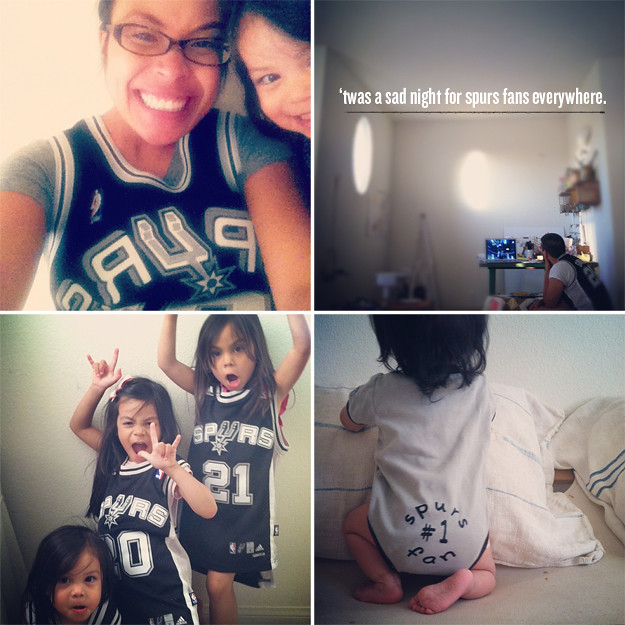 Here we are. The Spurs went out on game 6. What makes this even tougher is that San Antonio won 20 straight. It was an unexpected season. Then to lose 4 straight games, it was an unexpected ending. That’s how God planned it though. God knows better, right? As game 6 began to unravel and my stress levels increased because of the sadness that seemed to be imminent, the thought that stood out to me was that I don’t even feel this heavy for God’s kingdom. God’s using these losses as heart checks for me.

We’re sad over here. We sat in the dark as the game ended. Stunned in disbelief. We were so hopeful. Then Ben asked to cuddle (he’s cute!) and he told me stories of when he was little and a huge Spurs fan in the 80’s and about how much he loved the Spurs even when they were losing and not so great of a team and watched them grow into the great team they are. We gotta give it to OKC. They put up a good fight and won.

The girls were in bed and Ben had to break the news to them. True came out of her room and said, “Papi, I’m sad that there’s not going to be a parade.” She really wanted to go and we might have just made it out there for one.

Yeah, I know this isn’t a basketball blog, but it’s part of our family. The girls know all the players and we all get into it together. It’s all part of creating memories together as a family. Now, we might need to move out of state to ensure that the girls don’t marry Laker fans. That’s gonna be a tough one though. What are the chances that all four girls marry anti-Laker fans? Hmm… not sure about that.

Now we wait to see who OKC will play. If you have been following this story, then you know who we will be rooting for. We don’t like the Heat. We don’t really want OKC to win because frankly, we don’t care for Derek Fisher, so, come on Boston… let’s do this! And now the basketball coverage will continue on with baby sister because she loves the Celtics just as much as we love the Spurs.

the beginning of citrus season