Every year, Ben and the girls try to give me a “Rockin’ Mommy Day.” Ben believes birthdays and holidays should not be the only days to show appreciation, so he came up with “Rockin’ Mommy Day.” I never know when or how this day will come, but when it comes, it definitely rocks!
So on Sunday, I stayed home from church because Brave was a bit under the weather and we didn’t want to get any other kids sick. Well, True and Ben came home from church and immediately True had a message and a rock for me. True said, “You rock Mama!” With my past “Rockin’ Mommy Days,” the note is accompanied with a tiny little rock to remind me that I rock. It really is all too clever.
The note had the lyrics to Michael Jackson’s song “Rock With You” and the line, “DON’T TRY TO FIGHT IT, THERE AIN’T NOTHING THAT YOU CAN DO” was highlighted. This was my clue to the first surprise. 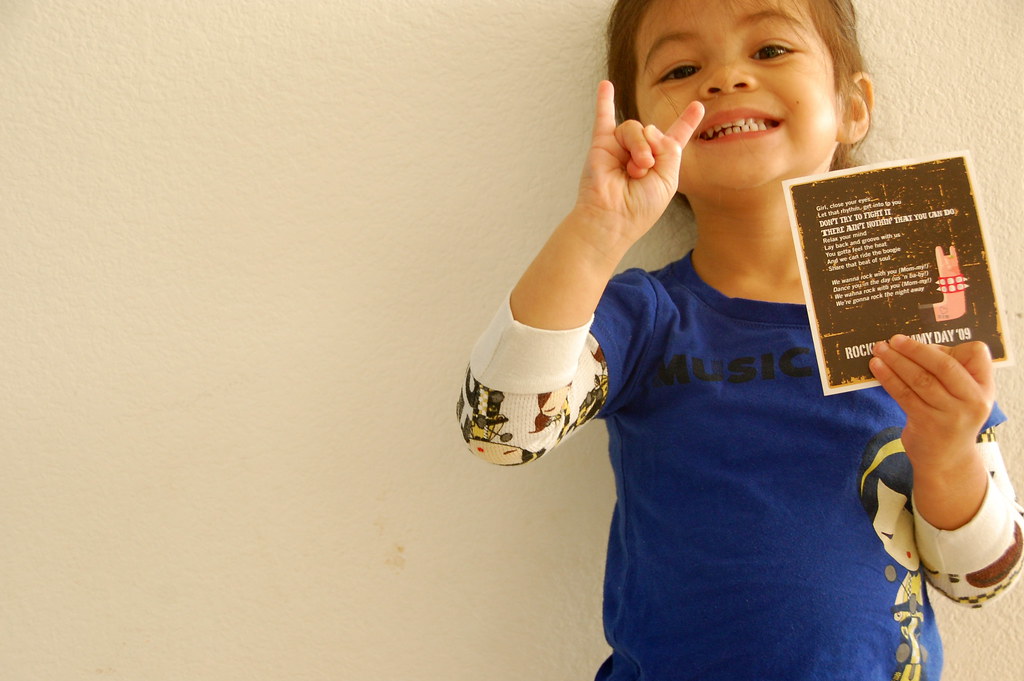 Ben hurriedly told me that we need to leave the house now. Good thing I was dressed! I didn’t know where we were going. I kinda freaked out as Brave was not dressed and we left the house without any shoes for the girls, so I thought what on earth was going on!
We drove a bit when Ben exited and was making his way to Glen Ivy. It finally clicked. My husband was dropping me off at the beautiful Glen Ivy Hot Springs Spa. They bid me farewell and informed me of all my appointments and that they would see me later. I was so excited! I had never been pampered like this before. My first appointment was a pedicure, which was kinda funny as I was just complaining to Ben about my feet the day before. 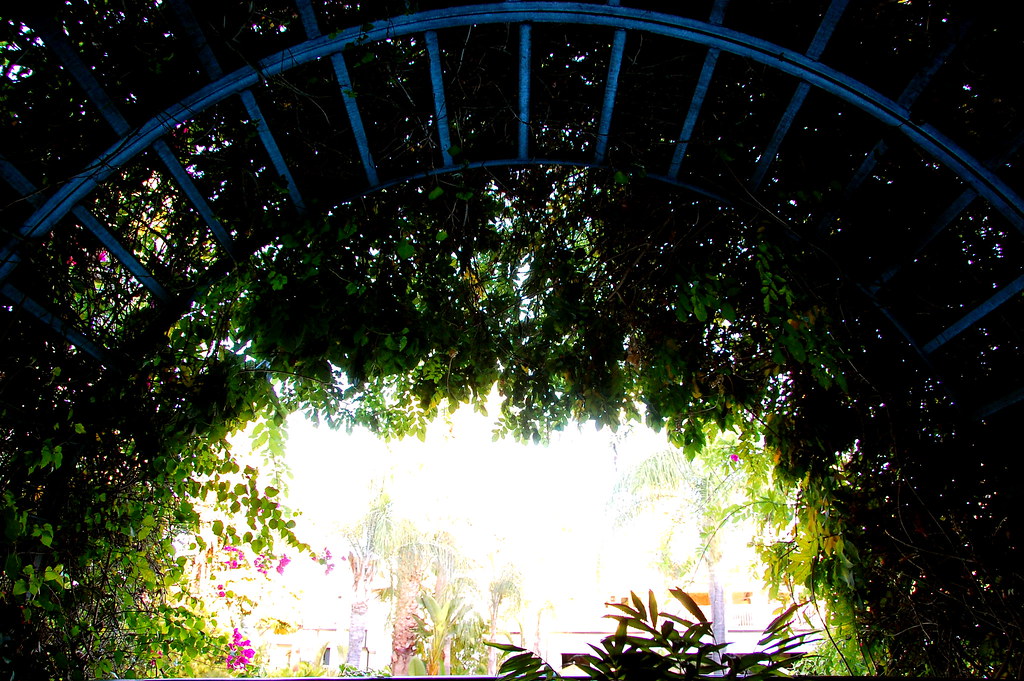 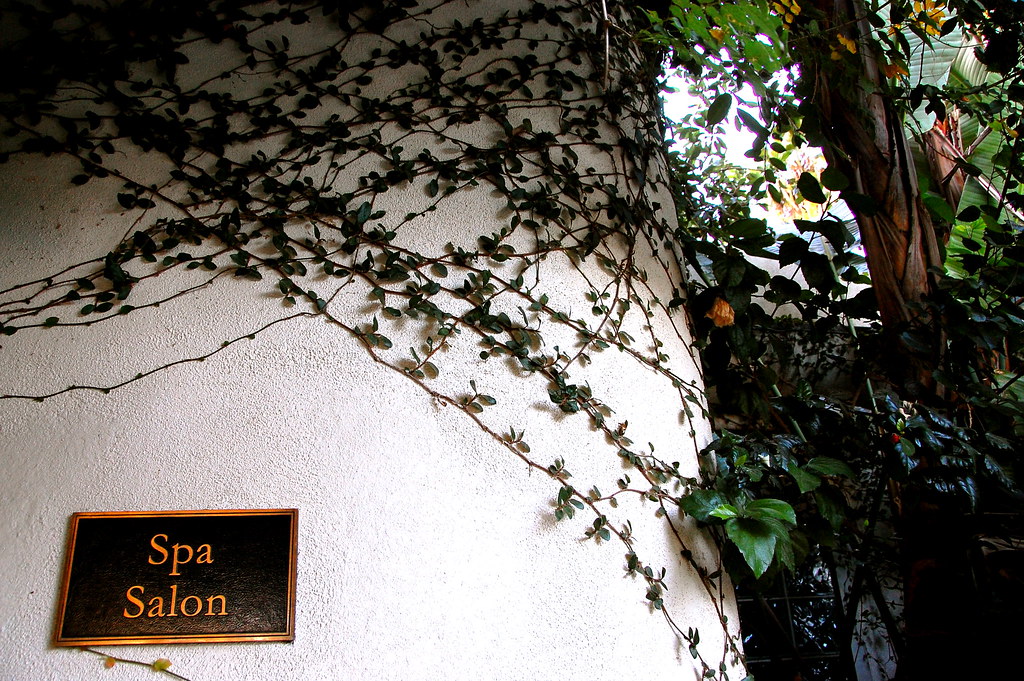 The pedicure was so relaxing and I was loving every moment. My next appointment, which was a pregnancy massage, was not for another 30 minutes, so I grabbed a yummy sandwich and lounged by the pool. It was so nice to enjoy some peace and quiet. After snapping pictures and enjoying the time, I moseyed on back to the salon and checked in for my appointment. 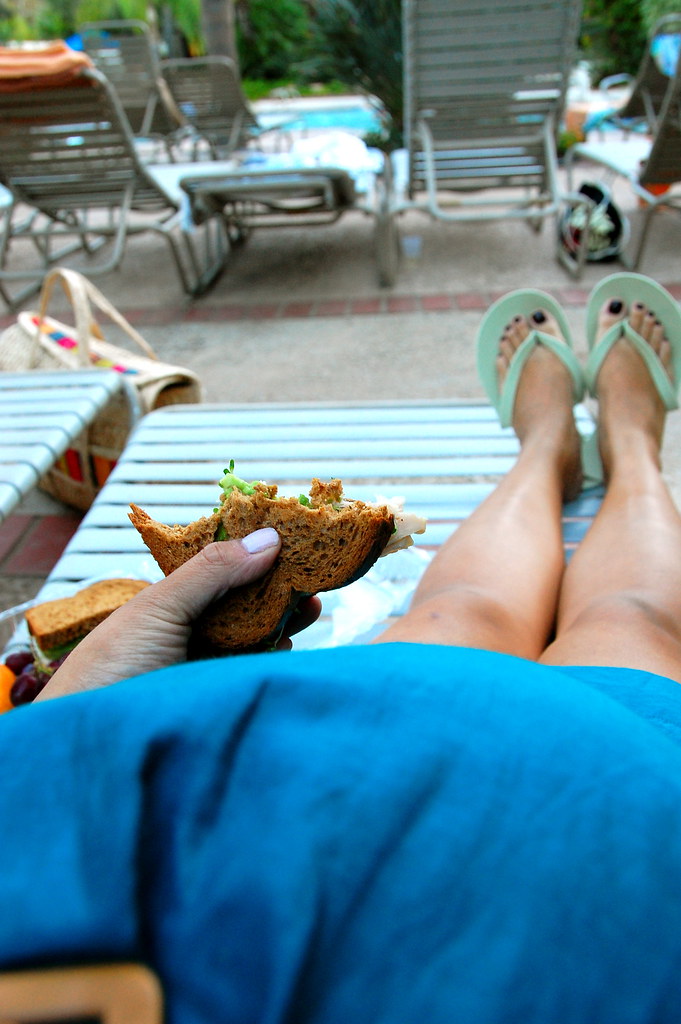 As I was waiting, I heard someone call my name and I looked up… it was my best friend Linda. I was so shocked! It was funny cause I was gonna call her while I was eating to tell her what Ben did, but I didn’t see anyone on a phone, so I thought it was not allowed. Well, it turns out my husband thought I might want some company, so he arranged for Lin and I to hang out and get massages together! Dang. Ben really thinks of everything.
Well, Lin and I chatted during the first half of our massage and then I think we almost fell asleep during the second half cause we were so relaxed. Then, they nudged us it was over, we didn’t want it to be. I think we were in denial. The massage was so wonderful and I (and Linda) wished it went on forever. 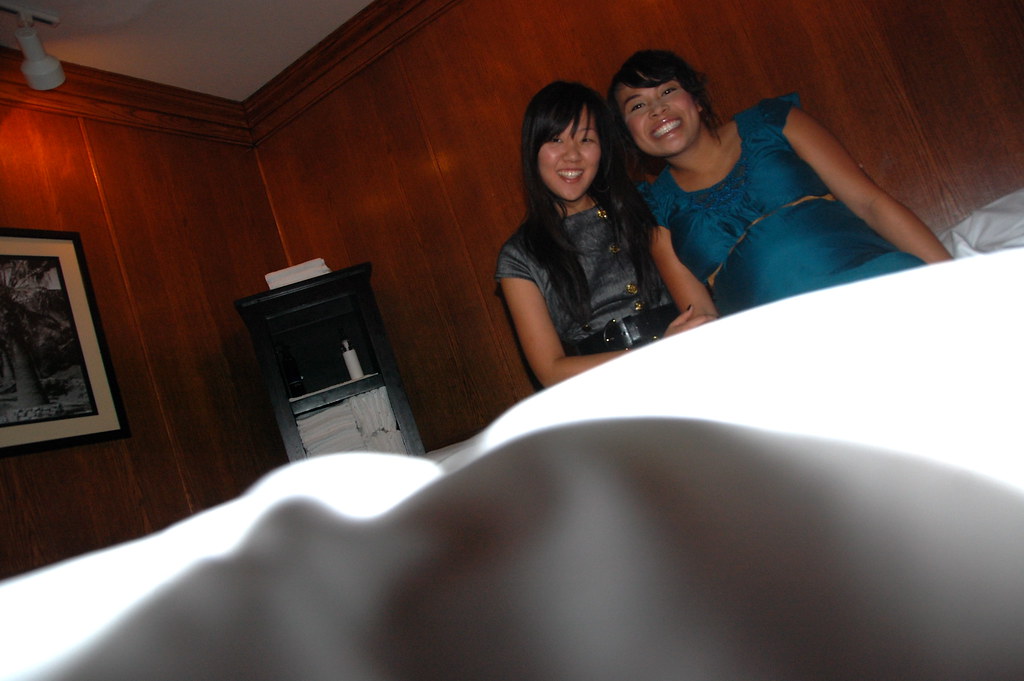 Now, I was getting the plan, not only was Lin there for some company, but she was also my ride home. I knew something was not quite ready wherever I was to be next, as she suddenly wanted to stop at a nearby farmers market and get some roasted corn. I kept bugging her that she was stalling and that Ben needed more time or something. Thus, we got corn and even made a stop at Anthropologie. Seriously, I was wondering what was going on that Ben needed that much more time. Linda then handed me my next note and rock…
The second clue was “YOU GOTTA FEEL THE HEAT AND WE CAN RIDE THE BOOGIE.”
Seriously, I was a bit confused and intrigued. 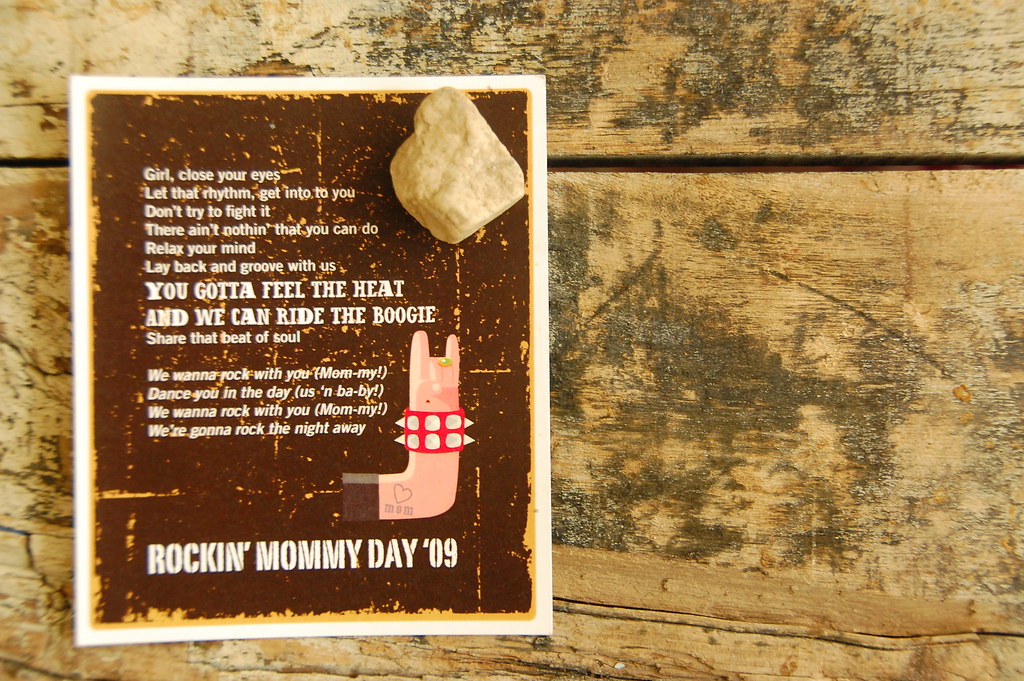 Finally, we made our way back to my house. She had instructions for me… I was to go through the front door and just sit on the blue couch and that is just what I did. Mind you, it was pitch black in my house and I sat there on the blue couch in the dark, all I could make out were these words written on the black paper, which covered the entire wall. 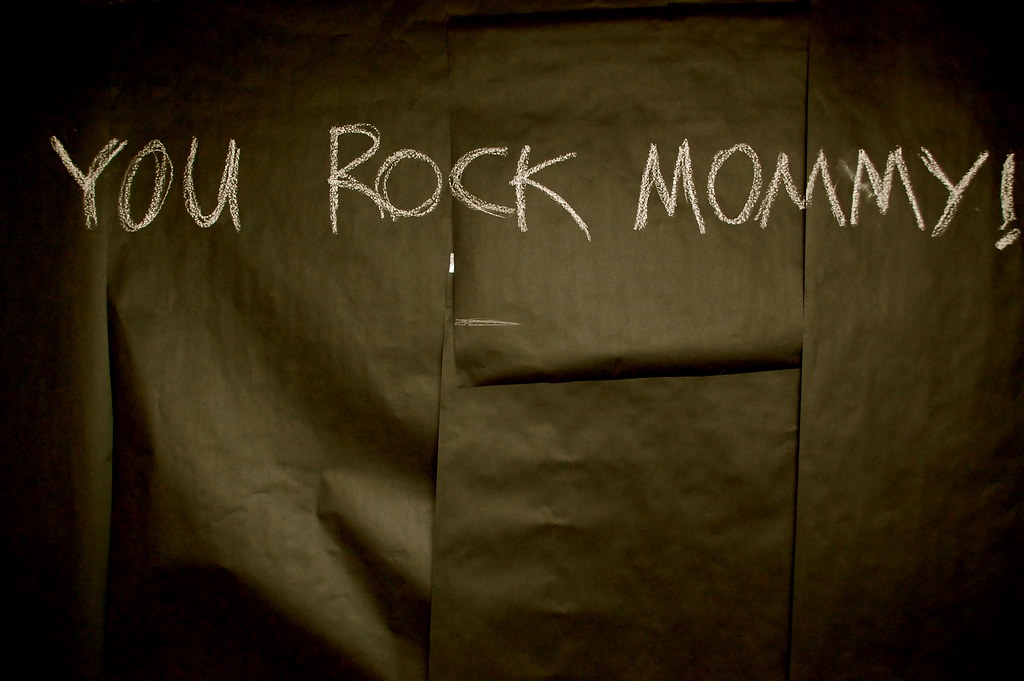 After about 5 minutes of waiting, I see little shadows with round heads stroll in and some music start playing. I started laughing hilariously once I realized what was going on! It was Michael Jackson’s “Rock with You” song, which was the song written on my rockin’ notes. My Ben and girls decided to celebrate “Rockin’ Mommy Day” by recreating Michael Jackson’s video. There was even a spotlight from the ceiling and a green strobe light behind them as they danced. Even the girls were totally into it as they were shaking booty and pointing the finger in their little dance. 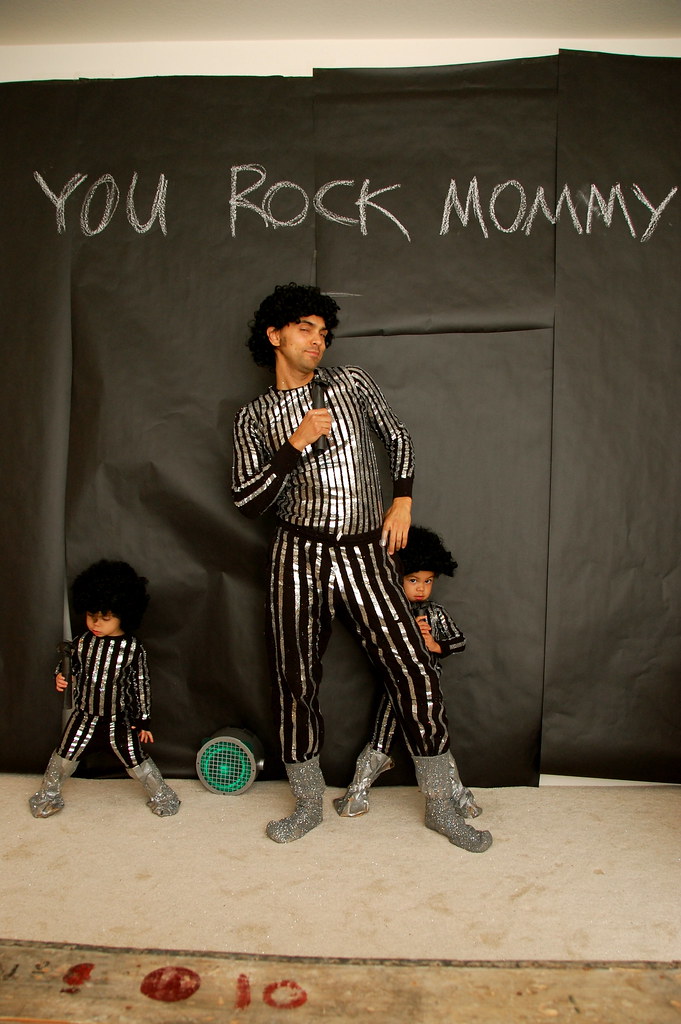 Mid-song, when the song sang “And we can ride the boogie.” Ben said, “Who is ‘Boogie’ girls?” Then, he left the room and came back carrying the rocker that I had been wanting and they aptly named the rocker, “Boogie.” I screamed in excitement and they all kept dancing along. 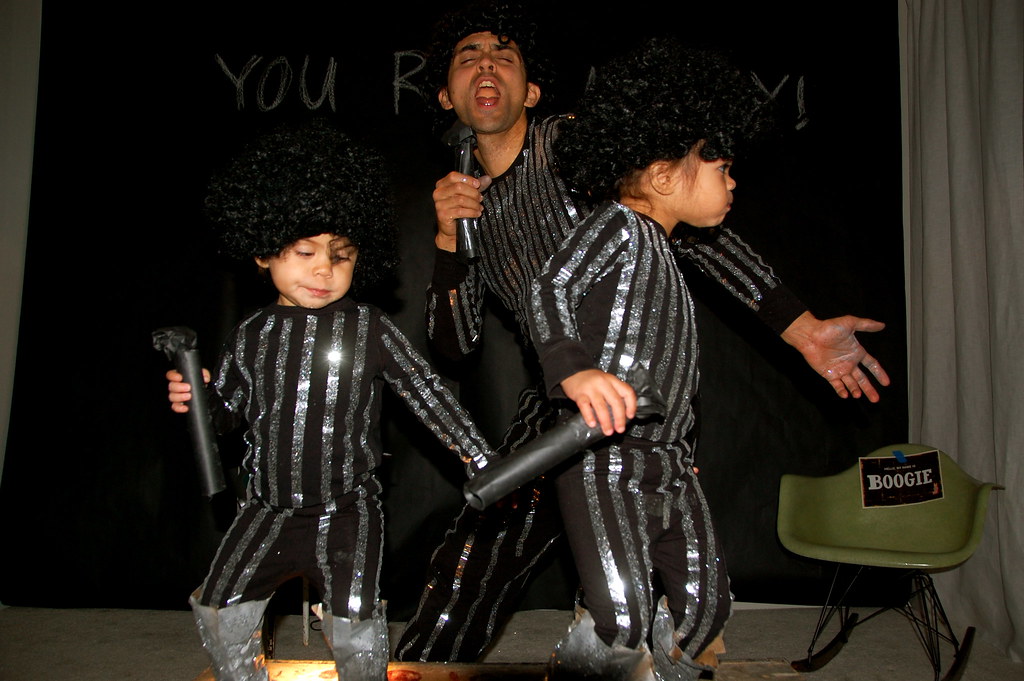 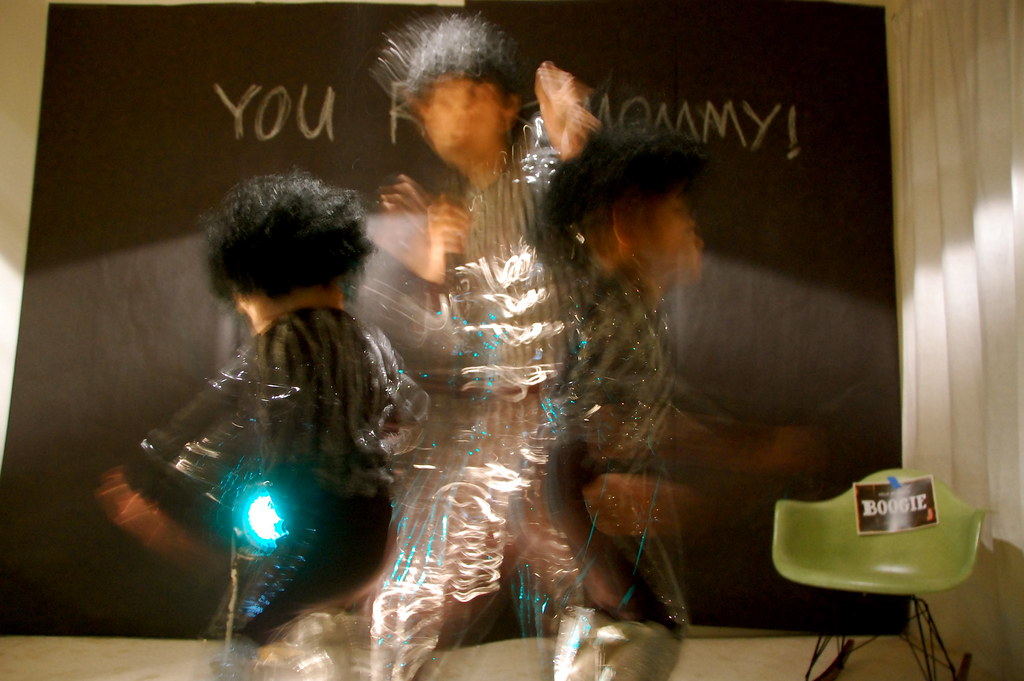 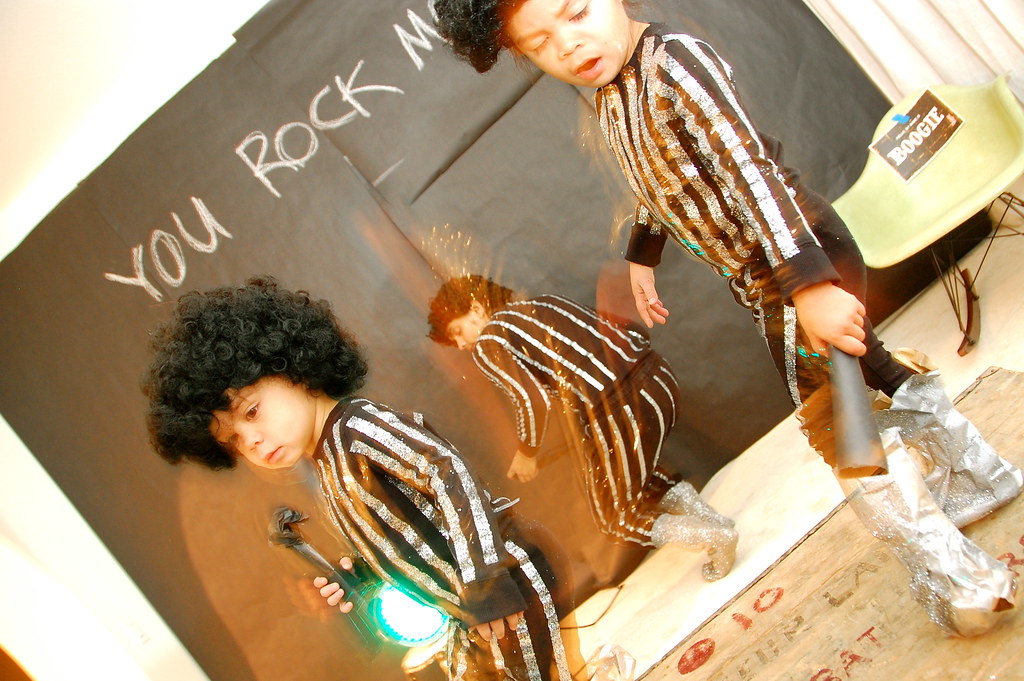 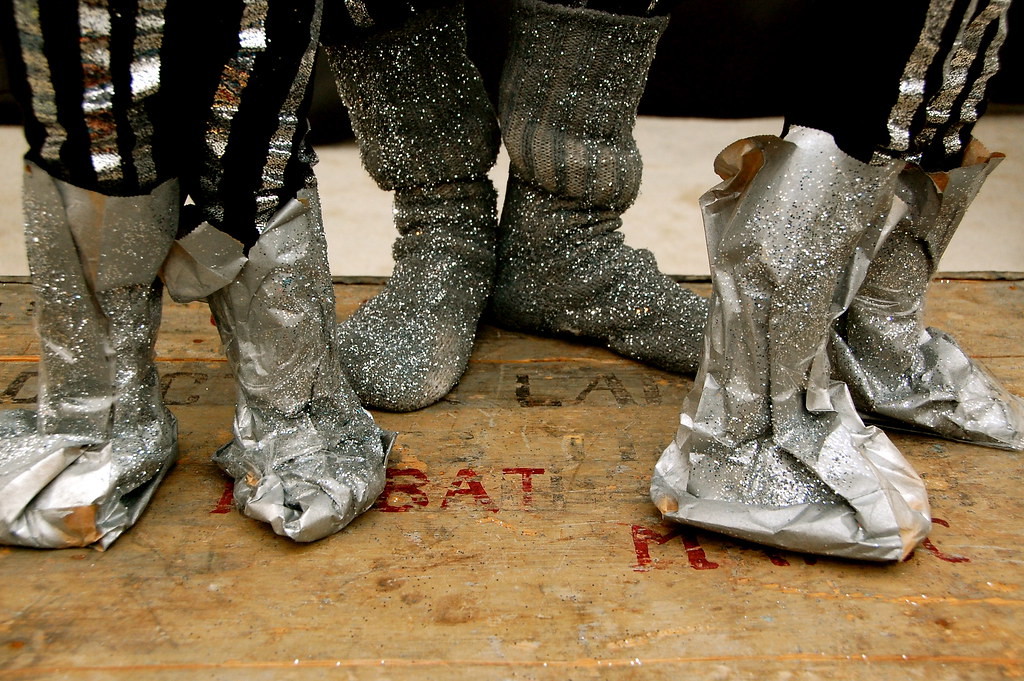 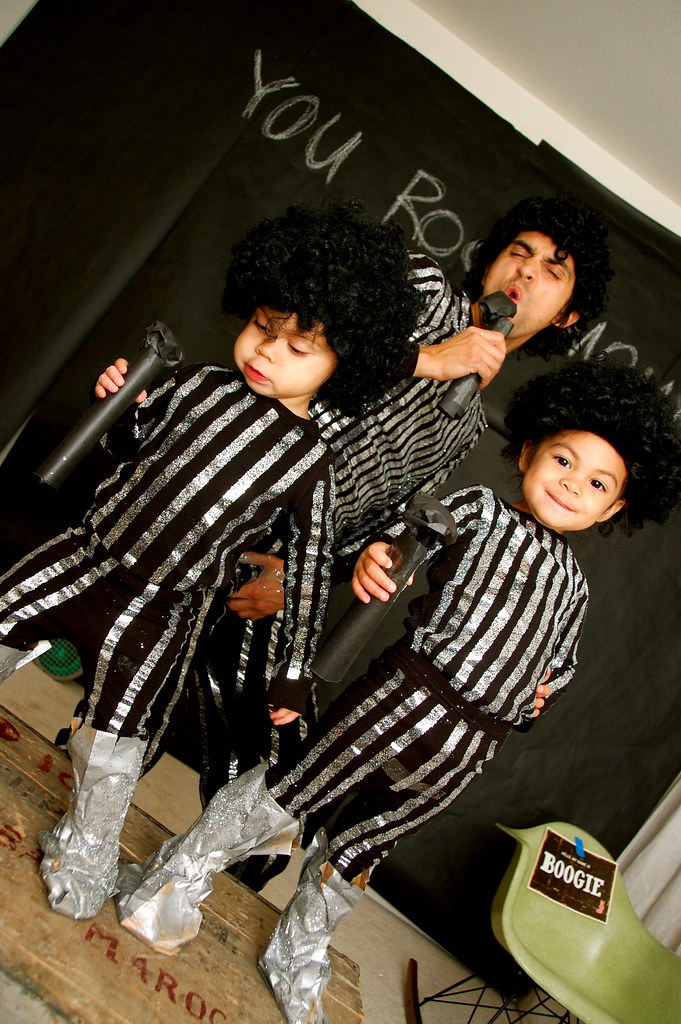 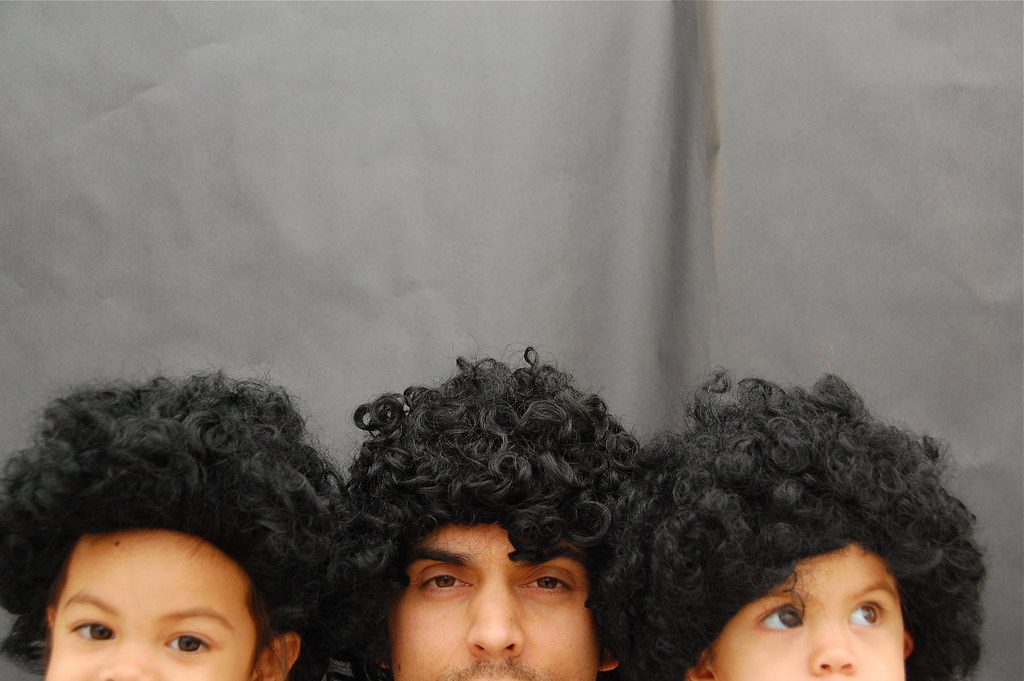 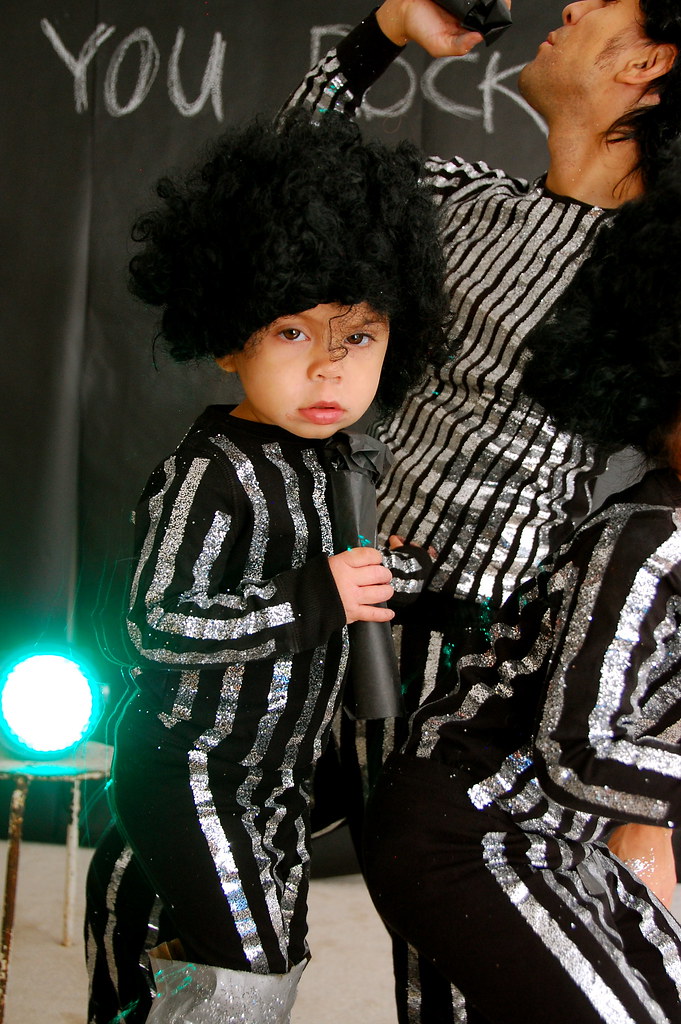 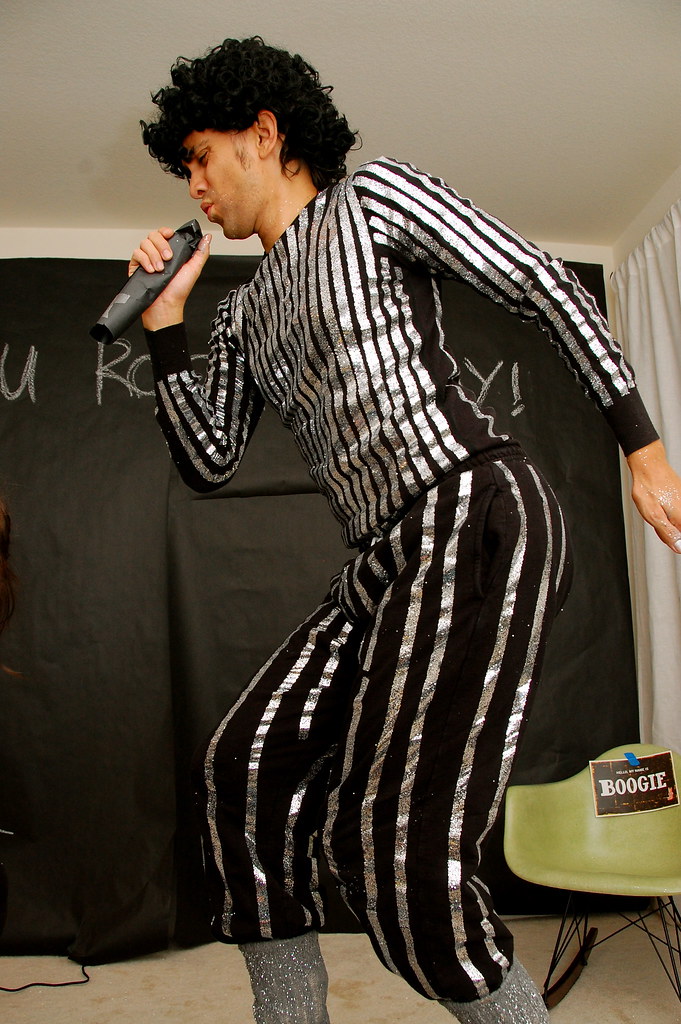 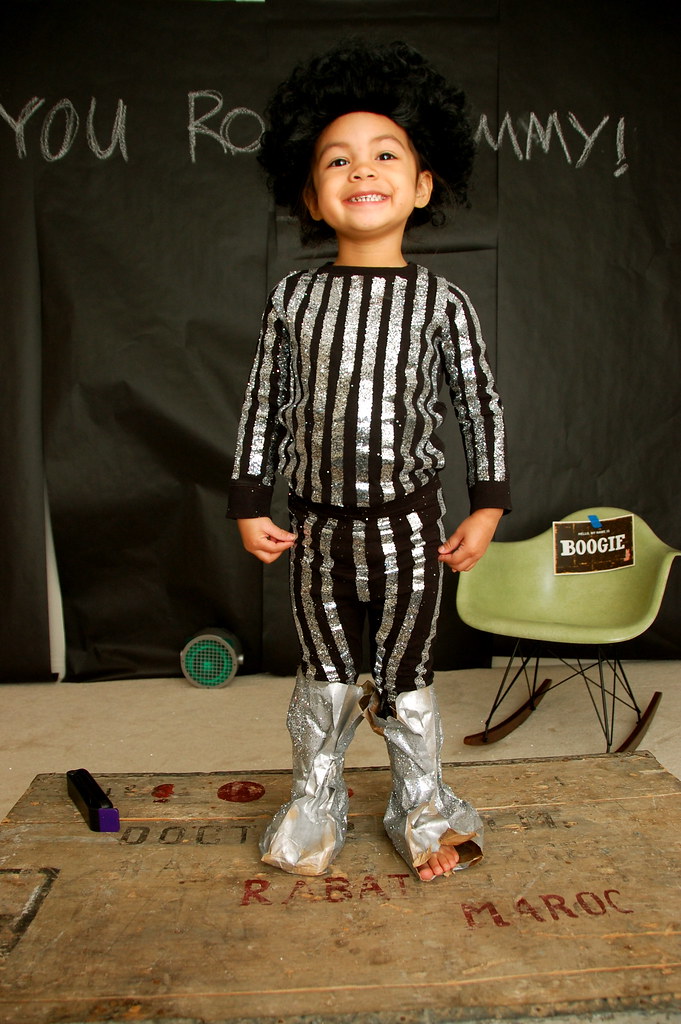 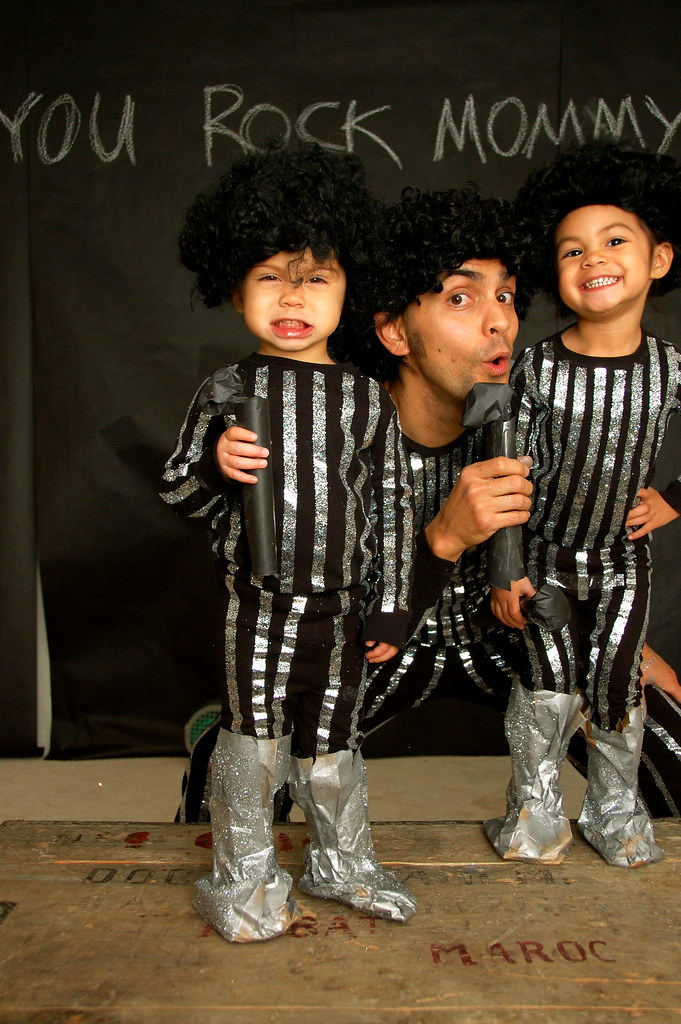 Of course, I couldn’t just sit there nor did they intend for me to, so they handed me another note and rock, which called me to boogie on down with them.
The note highlighted “GIRL CLOSE YOUR EYES, AND LET THE RHYTHM GET INTO YOU.”
So I let the rhythm get in, danced to a medley of Michael Jackson songs (even got to wear my very own special Michael Jackson wig!) and rode “Boogie” too. 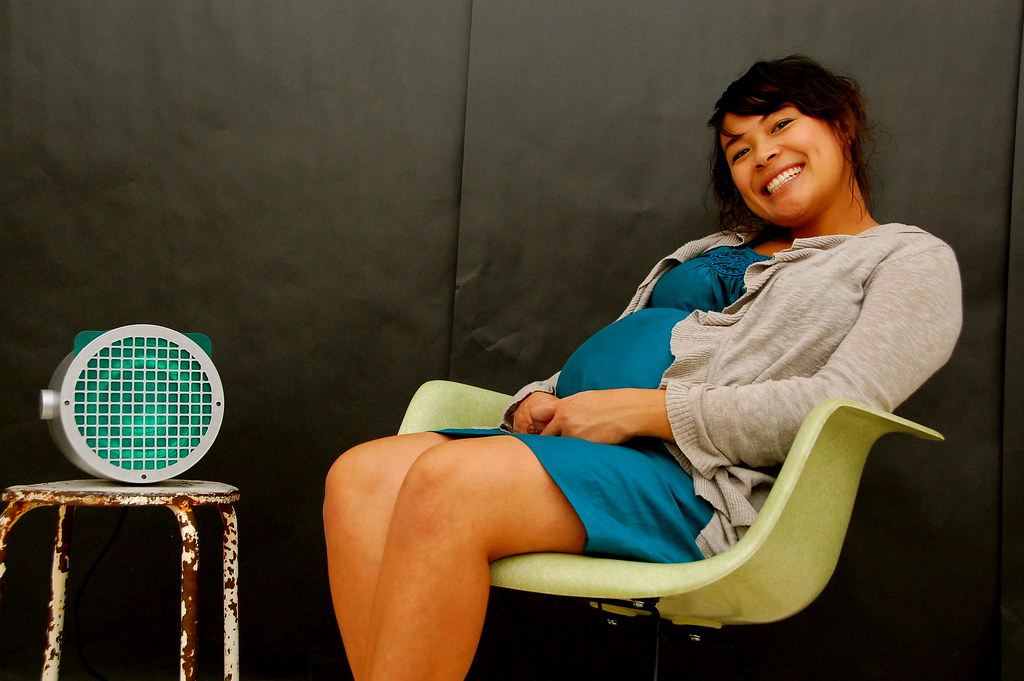 My husband is just so clever. He really would say he is not crafty or creative, but he really is just super humble, but come on! He bought black shirts and leggings, took double stick tape, laid stripes down on the black outfits using the double stick tape, then sprinkled silver glitter on top. Oh! I can’t fail to mention the silver boots that he spray painted and glitter-fied too! He even completed them all with some ‘fros. It looks pretty darn close to Michael Jackson’s outfit. Gosh… I am so blessed to have my Ben.
The rest of the evening consisted of picking up some yummy Japanese food I was craving and we had a picnic inside of our house. It was perfect.
The next evening, I had another surprise. Brave handed me another rock with a note that highlighted, “RELAX YOUR MIND, LAY BACK AND GROOVE WITH US… SHARE THAT BEAT OF SOUL.” The surprise was that the four of us were going to create a family-made piece of art to welcome the new baby. 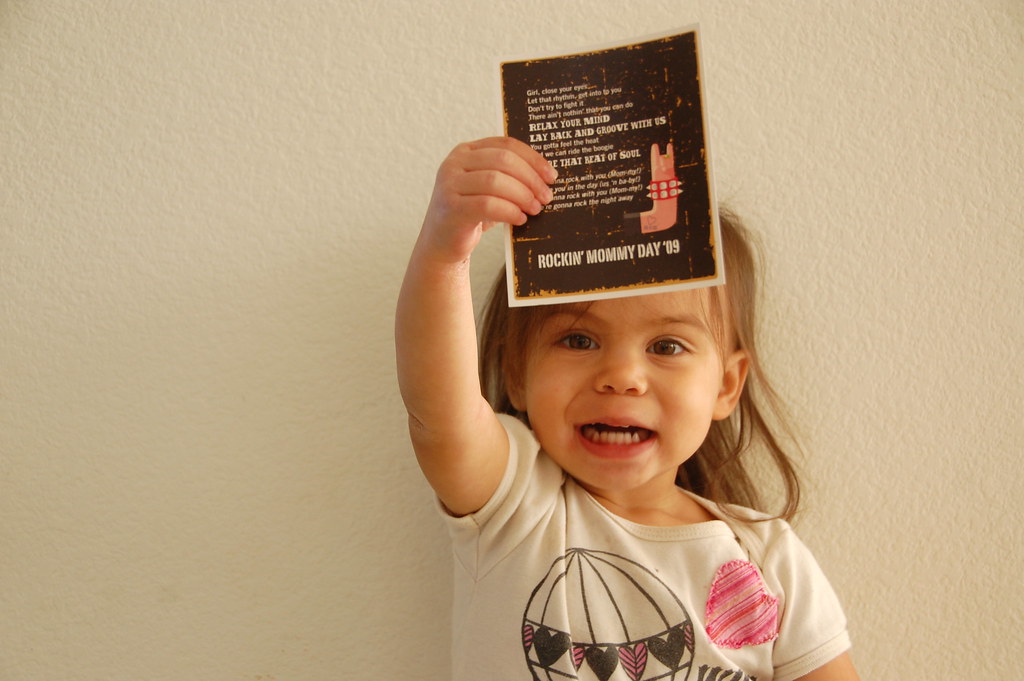 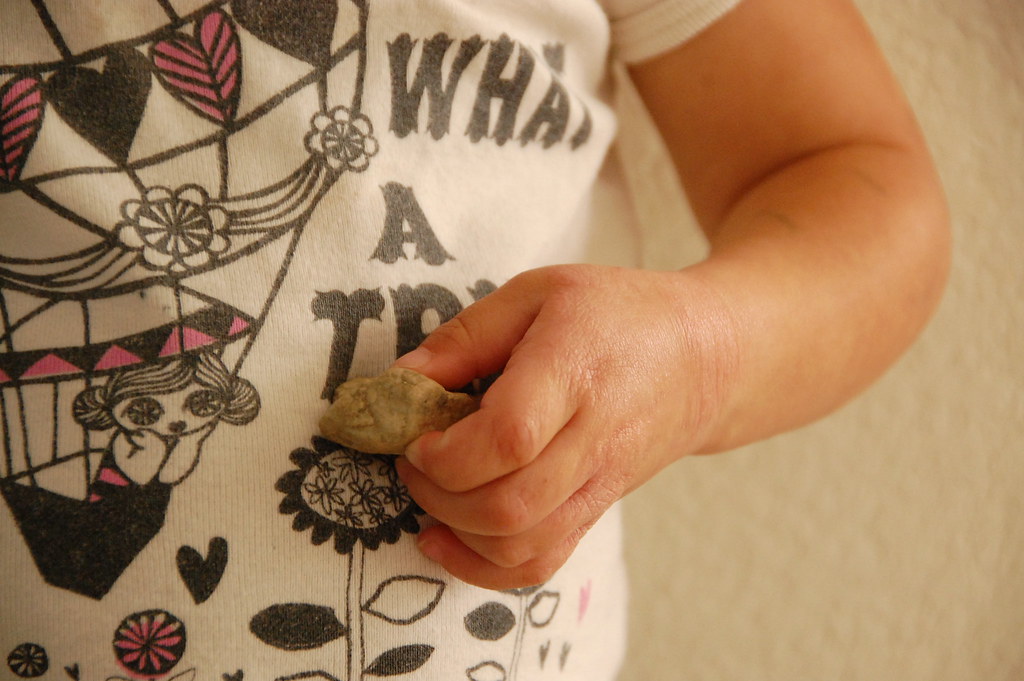 Although the Michael Jackson trio had been feeling under the weather, we had fun working together to create a masterpiece for the newest addition to our family. 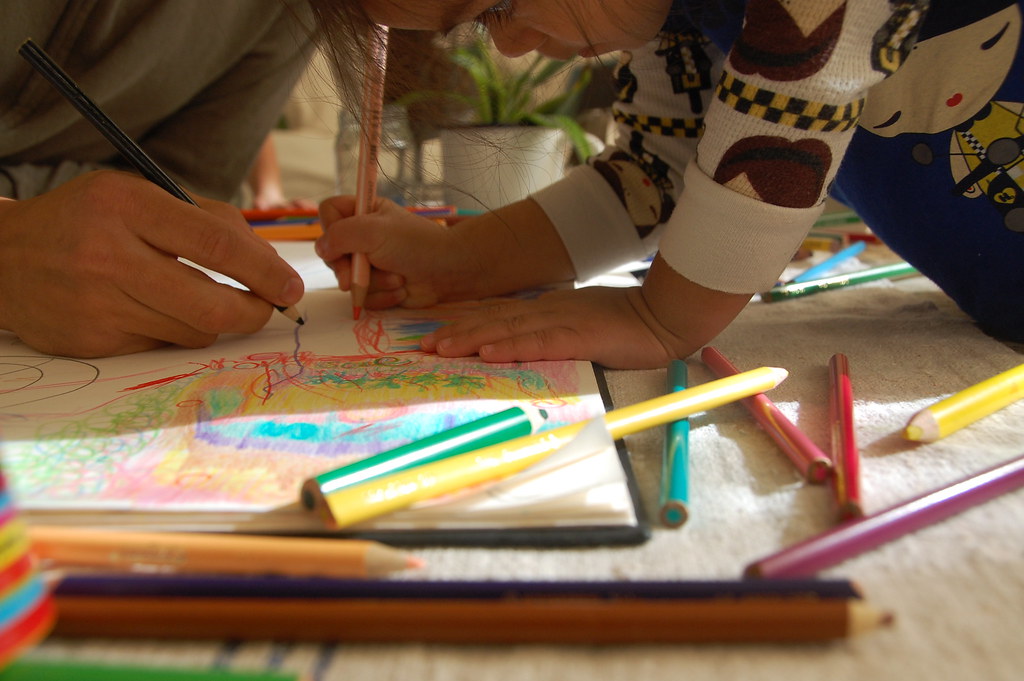 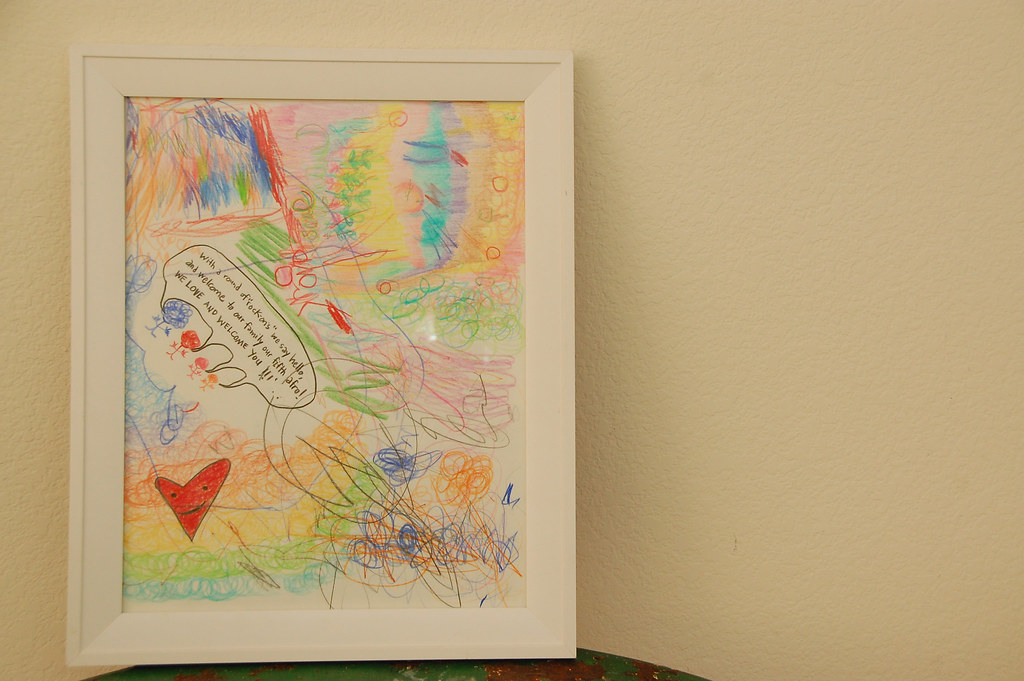 The end result is A-D-O-R-A-B-L-E as everyone had their own little corner and space that we worked on and drew and colored for baby. It definitely was a labor of love and something I hope baby will cherish when she gets older. It is framed and ready to go in the baby’s room, once she gets a room, but for now, it will be in our room as that is where babycakies will stay in the mean time.
I feel absolutely blessed to have been showered with this much love and surprises. I love being Ben’s wife and True and Brave’s mom. It really is so wonderful. It humbles me so much that they think I am so wonderful to deserve this because I know all my shortcomings and failures and it is only by God’s grace that I am able to go through each day as a wife and mother.
I know it may seem like this fantasy life with a doting husband and well-behaved children who like to craft all day long, but really, we do fight and there is even yelling in our house. Ben and I are both sinners who are struggling and trying to trust God everyday in the roles God has given us. It isn’t easy and there is no way we could do this on our own. Most of the time we fail, which makes us even more thankful for the cross. Thank you Lord!
It was definitely a most happy “Rockin’ Mommy Day!” My Benny and my girls rock!!!
Can see a bit more pictures here…