This week was pretty good as far as meal planning because we didn’t have to buy anything extra for the recipes. It was all stuff we were already stocked with, so it made everything much more perfect!
Monday we indulged in Chicken Piccata… 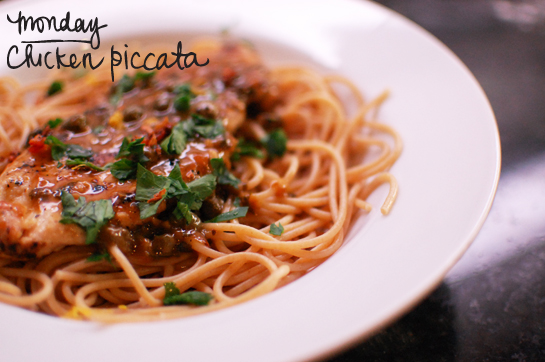 It is a healthy recipe, but it did not lack in flavor at all! In fact, Ben loved it so much he was licking the spoon that was in the pan, since the sauce went by fast. I paired ours with whole wheat spaghetti and it really made a nice dish. Ben said this was his favorite by far. I didn’t know what chicken scaloppini was so I just used our chicken breast and cut them in half, so they would be thinner pieces. Ben comes home and informs me that scaloppini was chicken pounded thin. I will be sure to try that next time.
Tuesday was for Apple-Honey Chicken… 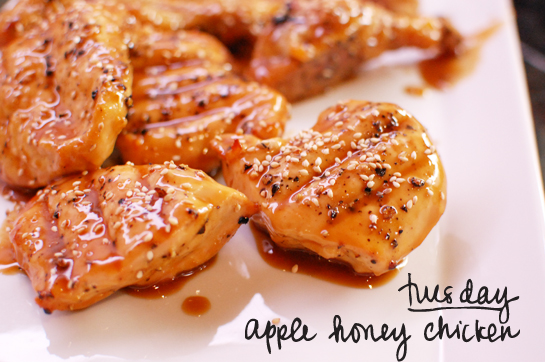 I used some drumsticks for the girls, but used mostly chicken breasts. If you like sweet and sour type foods, you will like this recipe. It definitely has tang and zing! The frustrating part, which thankfully one of you warned me about, was that the sauce never really went syrupy. I had to add about 2 tbsp of flour to about a 1/4 cup of apple juice and then mixed that in the sauce while it was simmering and that helped a lot. It took me about 30 minutes to get the sauce to thicken. I liked this dish, but it won’t go on the must-make-again-soon list.
Meals have taken about 30-40 minutes to cook and I cook enough to have leftovers on Wednesdays and Thursdays. We haven’t been able to plan for our vegetable dishes that well, but we do have canned beets, canned artichokes, and other canned veggies on hand to eat along our meals. We try to make sure our meals include some veggies. When the craziness of my sister’s wedding is done, we will get better at including planned veggie dishes. I noticed that the girls have been really enjoying the meals. They pretty much devour their food on the plate. I am glad they are really liking the meals too!
Next week we will be recuperating from my sister’s wedding and will have family in town, so not sure what our dinners will look like as we will likely be meeting up with family. We will go super simple on our meals and I am just going to try out one new dish and cook one of the new recipes we just tried.

Week of 2/5 – 2/9:
Monday: Spaghetti and Meatballs (though, we likely won’t be eating at home)
Tuesday: One of our Trader Joe’s dinners

Wednesday: Citrus Soy Squid on Buckwheat Noodles (Ben bought some frozen squid on sale, so I thought this might be a good time to try it.)
Thursday: Chicken Piccata (since Ben loved this so much)
Friday: Pizza or something super easy
If you are joining along, how is your meal planning going? Also, please share with me your favorite recipes. I would love to possibly try them!