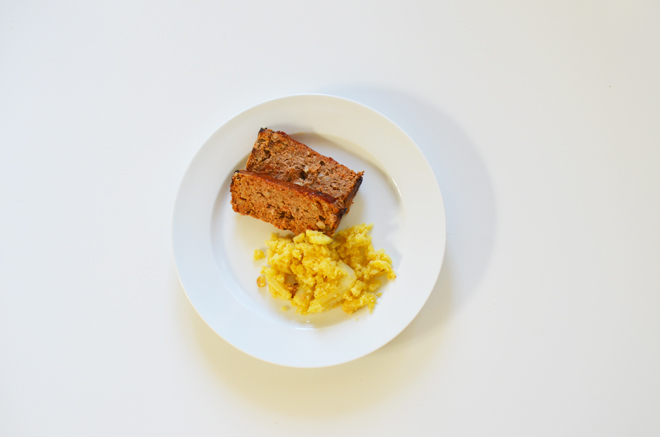 Turkey Meatloaf and Mashed Cauliflower and Pumpkin. If you haven’t tried the meatloaf from Skinny Taste, you must. It’s good and easy! I made two batches; one for the kids and one for me and ben. A couple changes I did from the recipe is throwing the onions straight into the meat instead of browning it first, and also in the one for me and ben, I added 1 1/2 tbsp cayenne pepper. Again, we love that spice. I did mashed cauliflower, but then realized we were out of potatoes or potato flakes, so I threw in some canned pumpkin. The combination doesn’t look go together with the meatloaf as far as color (both are kind of orangey), but it really does taste good together. 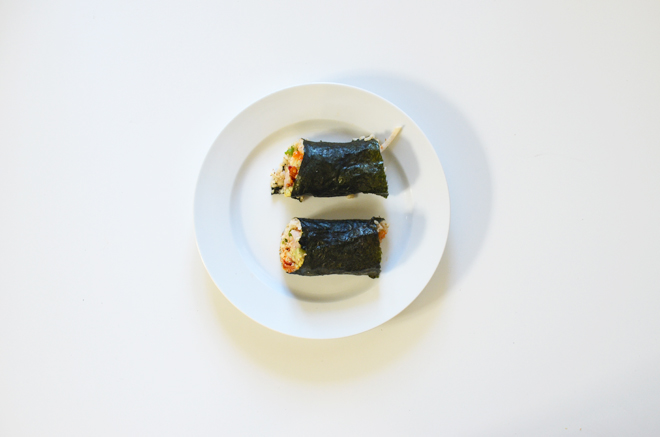 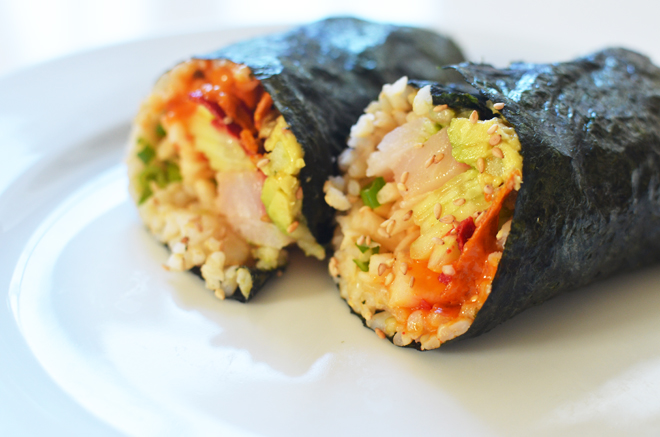 Sushi Burritos. Inspired from our trip last week to SF and eating Sushirrito. Okay, mine are oddly shaped and just looking at the pictures doesn’t make it look particularly appetizing, but this is a don’t judge a dish by its cover kind of thing. I was hurriedly rolling up our sushi burritos and frankly, I just don’t have time to make every picture look perfect. I’m just a mom who is trying to cook healthy, fresh meals for my family, I cook, put the food on the plate, take a picture (on a white background), then put it on the table and we eat! Despite the strange caterpillar-like-shape, this came out yummy. I studied the ingredients Sushirrito had and kind of added my own based on what we had. It was an experimental dish and we liked it. I’ll do another post sharing the recipe of what went in and this time I will try to roll better. I have no doubt sushi chefs would put my rolling skills to shame because I hardly call my rolling a skill. It’s more like crossing my fingers and hope the whole things stays together!

The rest of the days were spent eating leftovers and other quick things that were put together from random leftovers. Also, I got to escape two evenings in a row and have dinner with some of my friends. I really am so thankful for my friends. It’s always good times when we’re together. Food and friends make a really good combination!

What’s your favorite soup to make? I’m in a soup mood!