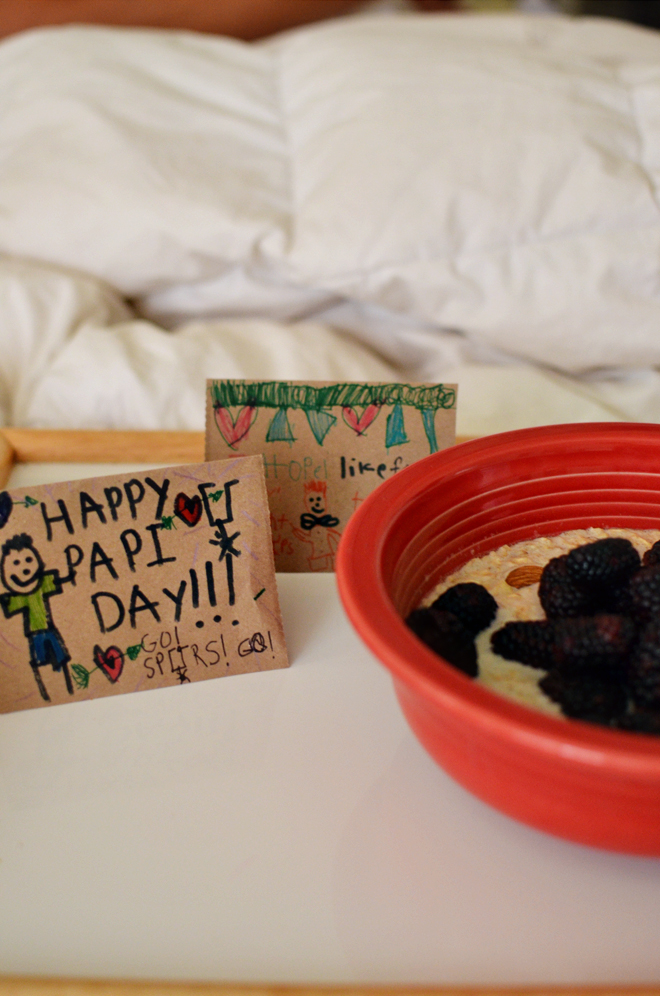 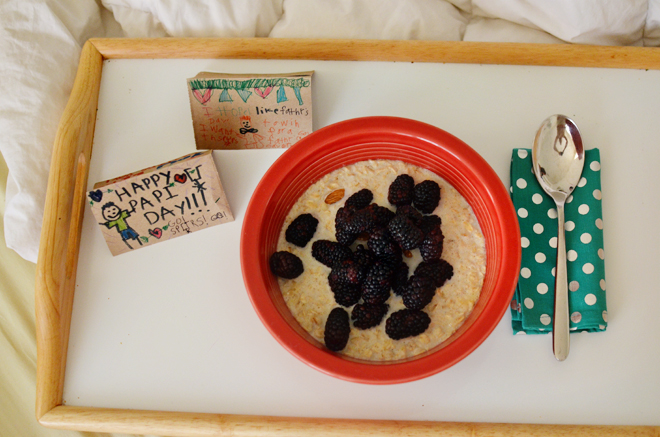 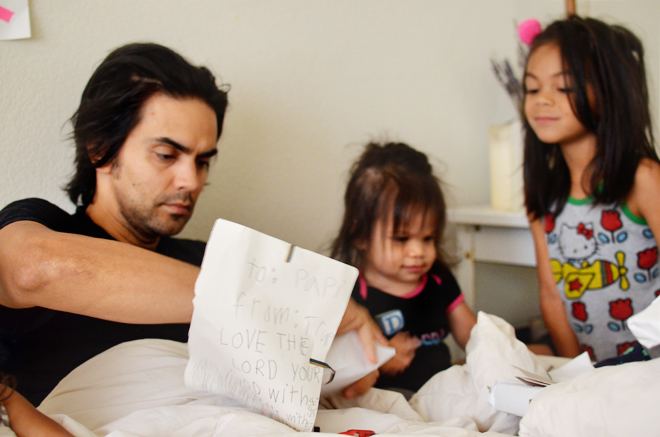 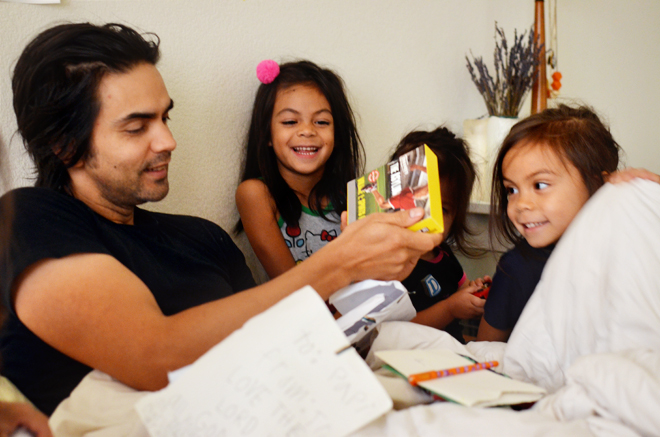 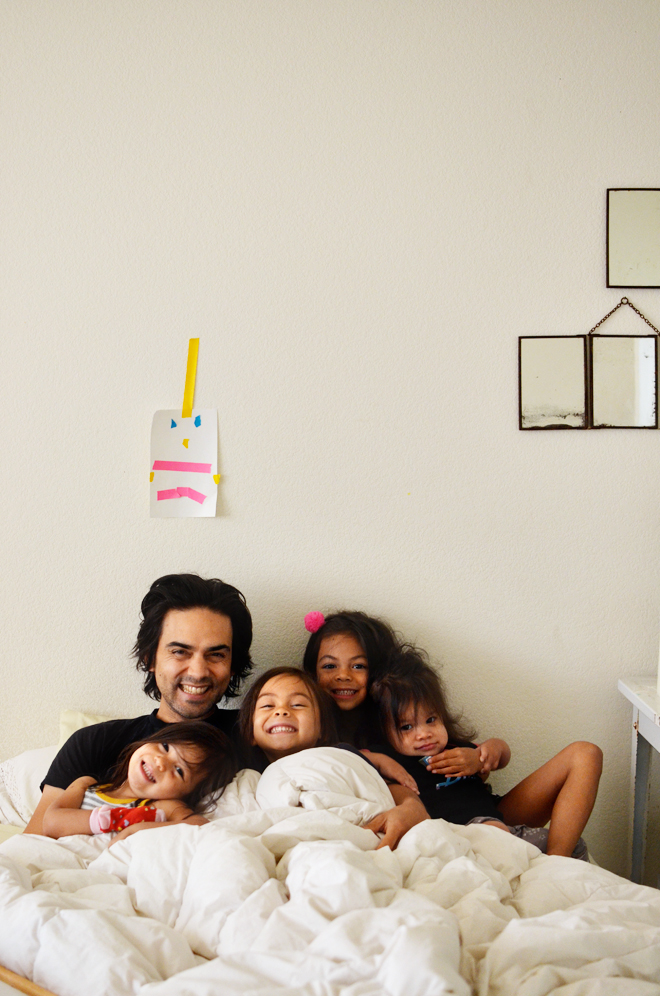 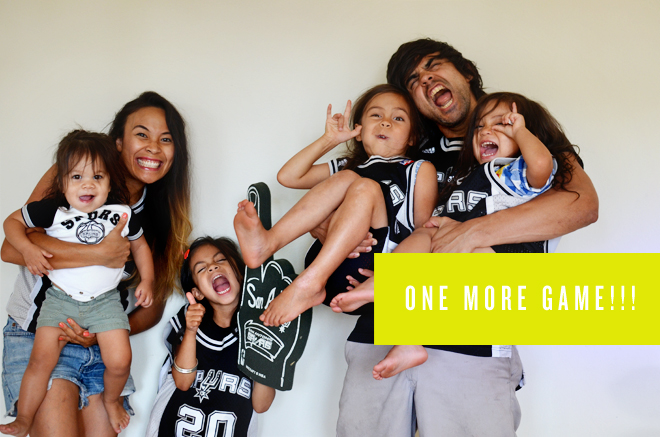 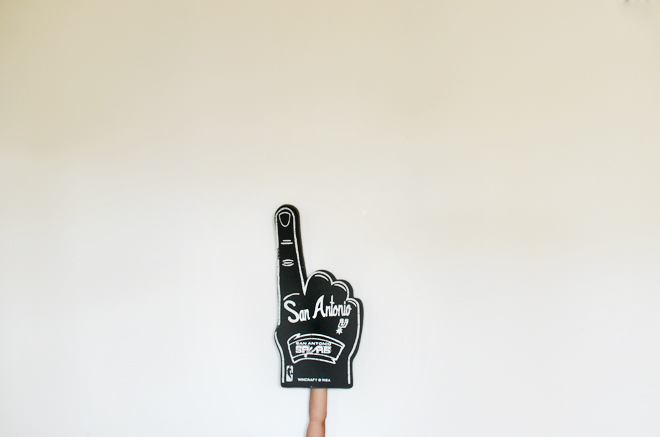 It was a simple day that matched our simple guy. I asked him the night before what he wanted for breakfast, since we traditionally make him a massive vegetable omelet, but he said all he wanted was his oatmeal. I had him tell me how to make it, he’s very particular about how it’s made, and I made it just as he instructed. 1 cup of oatmeal, about a cup and a half of milk, two handfuls of berries, 1 full scoop of protein, and 23 almond pieces. Yes, exactly 23. The girls put their little notes on the tray and we sang the “Happy Father’s Day” song (birthday song with the words substituted) and he had his oatmeal in bed.

The most special part is that the girls had wrapped up some gifts for him earlier in the week. I had no clue what they were. They mostly gifted him things that were already his, like our workout DVDs, a new pair of boxers he bought, a pair of his socks, though True did graciously give him one of her pens. The most special part about it was their wrapping, especially True’s! She wrote a bible verse on it (see here) and we were so amazed by it. We asked her, “Where did you get this?” She said, “In my bible. I opened it and read it, then wrote it down.” Seriously, that sweet heart of hers was the best little gift. I totally remember them coloring and drawing during the week, and her Bible was right next to her on the floor, so now it makes sense why it was there!

Ben’s one wish for Father’s Day was that the Spurs win game 5, and boy did they deliver! Game 5 was won with such good team basketball! Ginobili was Ginobili, Green was raining 3’s again, Parker is just awesome, and Duncan is Duncan. We love our Spurs!!! We were hootin’ and hollerin’, and we were all so excited! And we were all decked out in our Spurs gear, so I think Ben had a pretty darn good Father’s Day!

I love that man of mine and I’m so blessed by how he loves, serves, and leads our family!