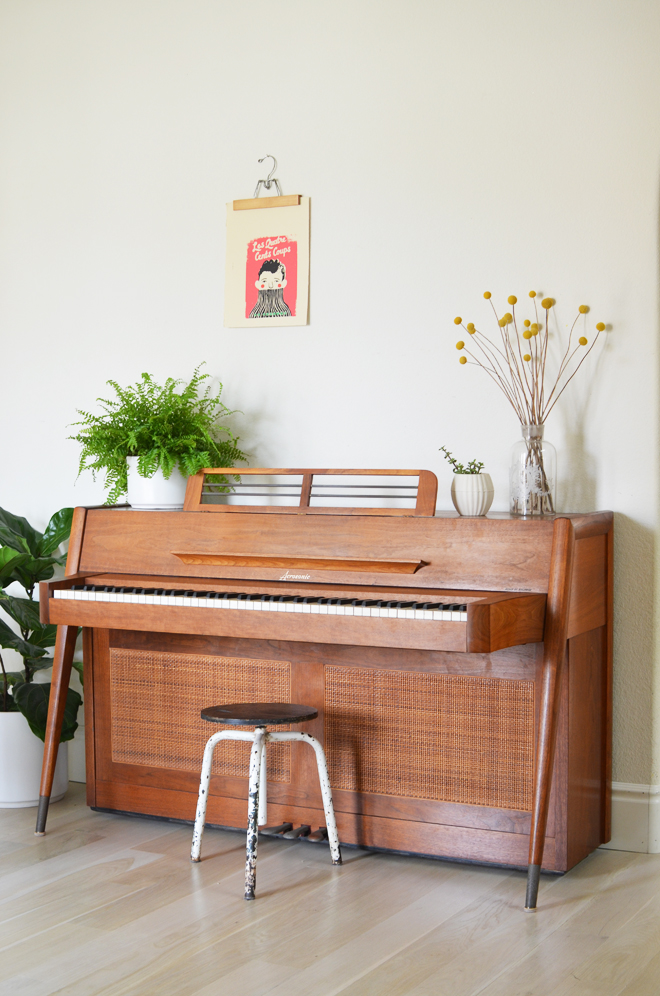 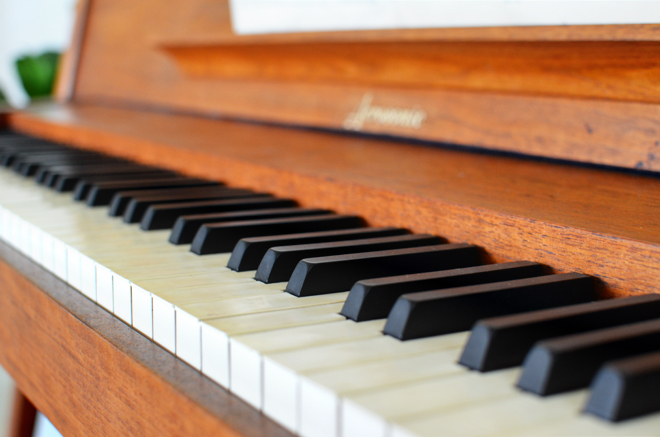 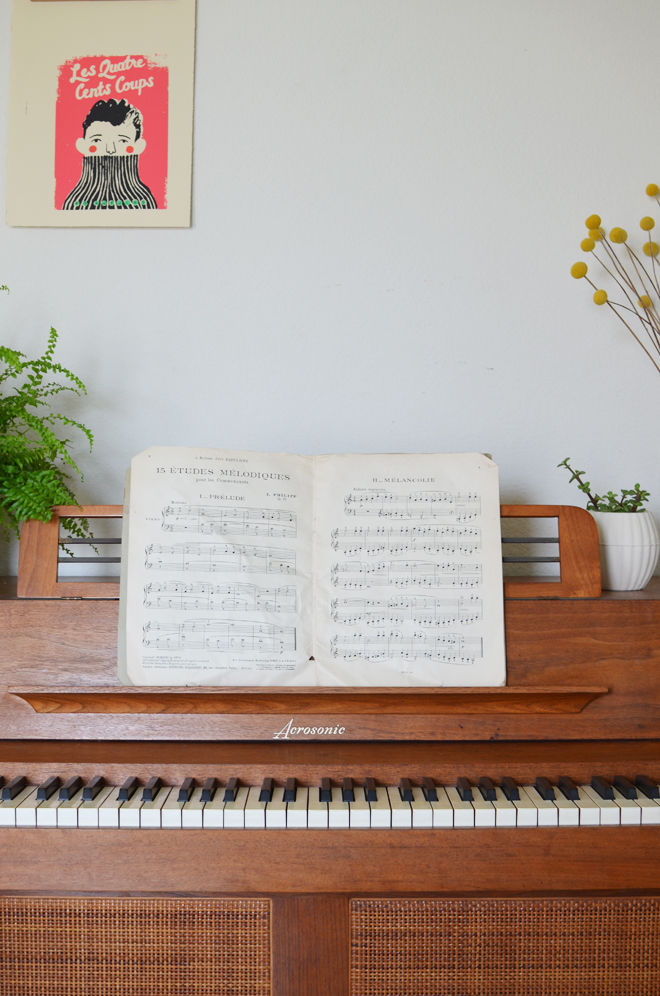 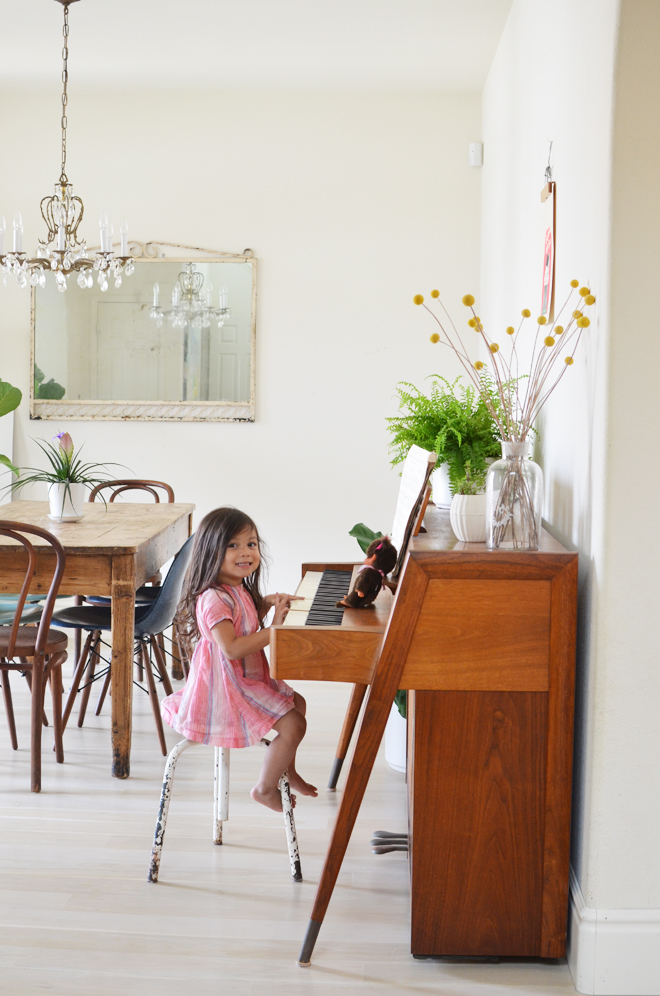 I had been wanting to get a piano for awhile, so I would randomly check craigslist from time to time to see if anything ever caught my eye. I was inspired with Rachel’s piano find and DIY, but I am definitely not ambitious enough for that. Ben and I have to love something the way it is because we never get around to painting or refinishing something. We’ve already have so many projects going on, that refinishing furniture is something we would never get to.

One weekend, I suddenly got really serious (obsessed is more like it), about looking for a piano. I think it’s because I came across one at this shop and loved the style of it (and the restoration process Rafael, the shop owner, does to the pianos!). If you know Ben and me, we’re notorious for researching everything (we can spend hours!), especially big purchases. I originally thought I would find a used, pretty piano, buy it, then have someone come over and tune it, and that’s that. After much deliberating over the piano I originally wanted, and how to be sure it was a good buy and brand, I started talking to people who are part of the Piano Technician Guild to get advice on pianos.

I really wanted a spinet, but then after talking to lots of professionals, they said the only spinet they would ever recommend getting is a Baldwin Acrosonic. Other than that, everyone said to get an upright or studio piano. I also used my brother (and his friends) as a resource; he’s a musician and so are all his friends, and they all said to get a Yamaha or Kawai. Everyone saying not to get a spinet due to tone quality kind of bursted my bubble, and then everyone recommending brands that we’re not in the budget really was a Debbie downer too. That weekend I was emailing and speaking with 4 different piano technicians. I seriously got obsessed with pianos and was reading everything I could about buying a used piano.

Then my research became much more specific, and since I really wanted a spinet, I started craigslisting the spinet everyone recommended… the Baldwin Acrosonic. That’s when I came across this particularly pretty one with sexy, slanted legs on craigslist. It looked so different and it was a Baldwin Acrosonic! Ben and I really loved the simple design of it. My only worry was that it didn’t have a keyboard cover and didn’t know if that was a big deal to me or not.

It was only one of its kind in my search, whereas, there were a lot of similar style Baldwin Acrosonics (like this) that I was coming across. I think I spoke to 7 different Baldwin Acrosonic sellers, but only one had this particular style. Ben and I made time to to go see it that weekend and once we saw it, we were sold. Now, all the piano technicians I spoke to recommend having a professional check out the used piano you’re considering to determine if it’s even worth the cost because sometimes there will be numerous things wrong with it that might not be noticeable to the untrained eye (and ear). The seller of this particular piano had a piano teacher look at it to aid in pricing it to sell and when I saw it and tinkered with it, we felt comfortable enough not to spend the additional hundred to have a piano techinician look at it before we bought it, so we kind of took a chance.

We had piano movers come a few days later to pick it up from the seller and bring it to our house. We didn’t want to take the chance to move it ourselves (to save our backs and the hassle of renting something to fit it), so we let the professionals do it. Then after about a month, we had a piano technician come and check it out to determine if anything needed fixing and tuning. We waited a month because the technician recommended that the piano needs to be given a chance to acclimate to its new home. Who knew pianos needed that much care?! I certainly didn’t. The verdict of the piano technician was that all our piano needed was a tuning! The sound tone and quality is fabulous, but he does want to keep an eye on a couple pins in the pin block, but other than that, he said it was a fantastic instrument. He too was in love with the style of the piano. He said he had never seen an Acrosonic in that design before!

All in all, we stayed within our piano budget which was a little under a thousand (all the piano technicians and musicians were telling me a good piano would be way more!), though it was more than my initial thinking of $200 for a used piano, we got a quality instrument that was recommended by professionals, so we were okay dishing out a little bit more money. Plus, it was a style Ben and I both loved. That piano is definitely a looker! The girls started piano lessons with my brother, who just graduated with his Bachelors in Jazz and Music Composition, so if anyone in the L.A., O.C., and Inland Empire want piano lessons, I highly recommend him! Not only does he teach piano, but also guitar, ukulele, and drums! I believe he can also do banjo and saxophone lessons too. Sometimes I wish I got his musical talent, but my piano skills are very basic and though I can hold a tune, that’s all I can do.

Buying a piano the way we did was a bit of an investment, but it’s something we definitely knew we wanted to invest in for the girls. I’m not letting them quit for sure and I think they would thank me later, at least I hope. I quit sometime right before middle school and tried to pick it up again by taking lessons in high school, but it still never became natural to me. I wish I never quit in the first place. My sister who quit early too (she even wrote my parents a one page essay on the reasons they should let her quit), wish that she didn’t. I’m excited to see how the girls do with piano and I’d like my brother to eventually teach them guitar too. We had a little wannabe family band growing up, so maybe it’s time the Bratcher girls started one too!

A few of my favorite things…