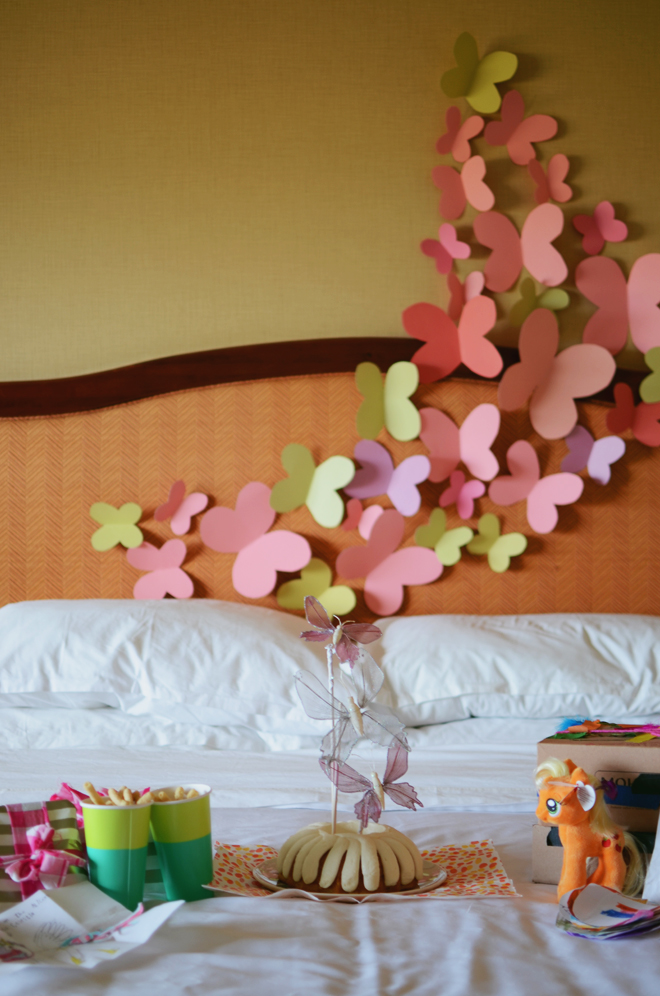 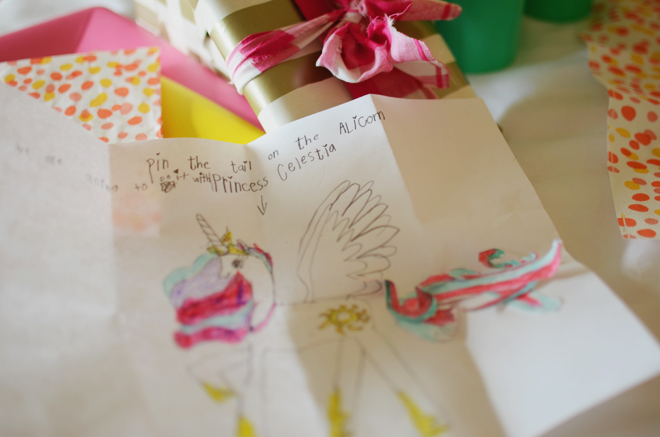 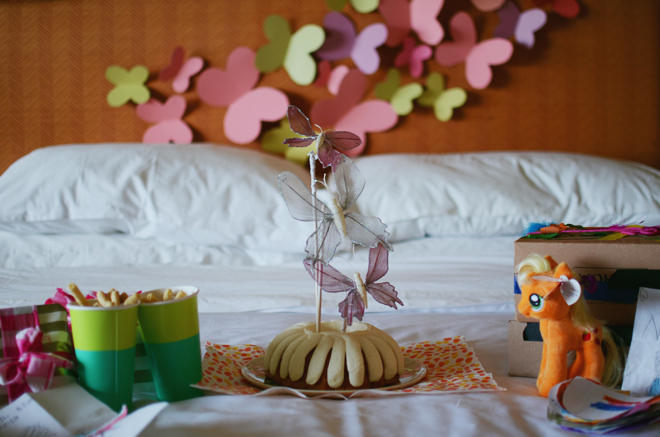 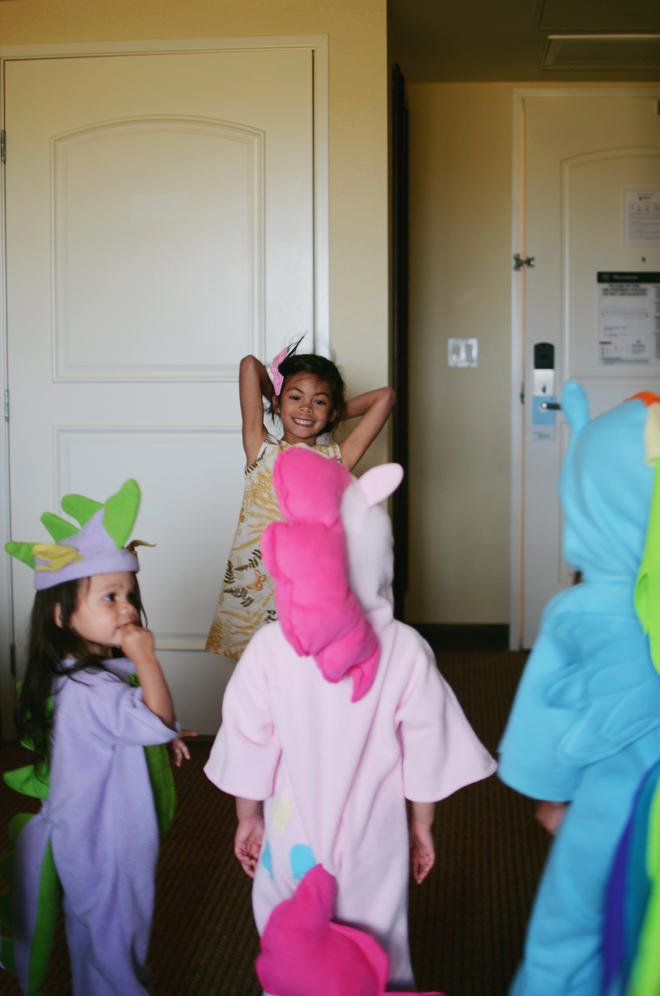 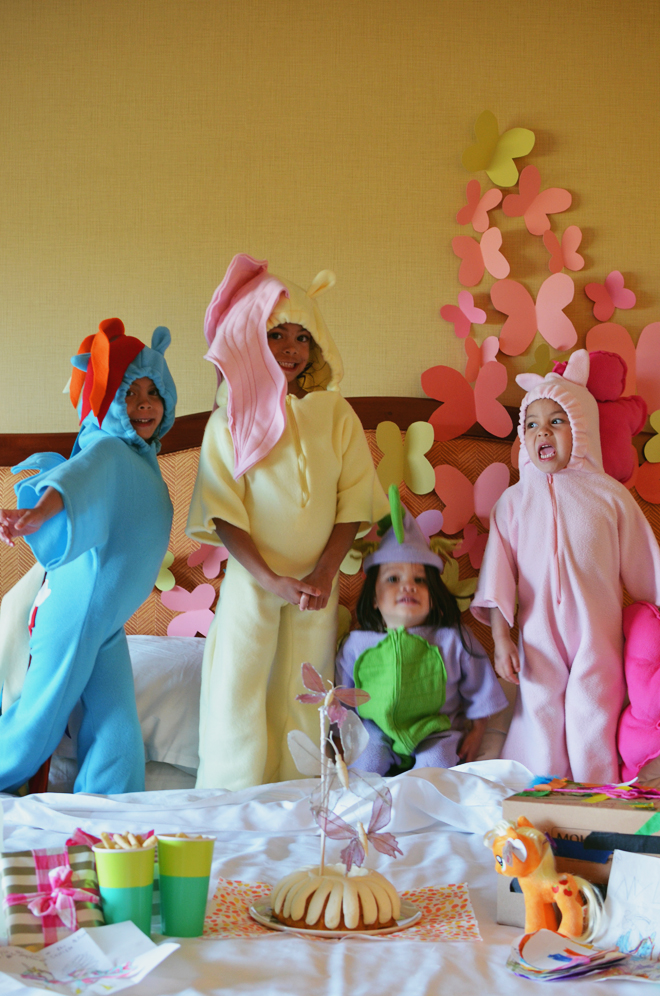 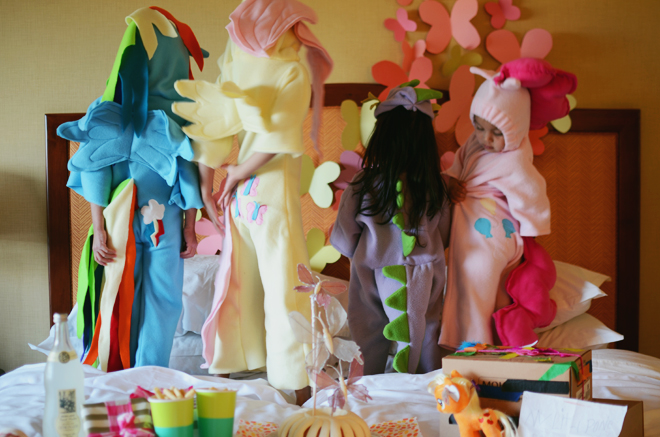 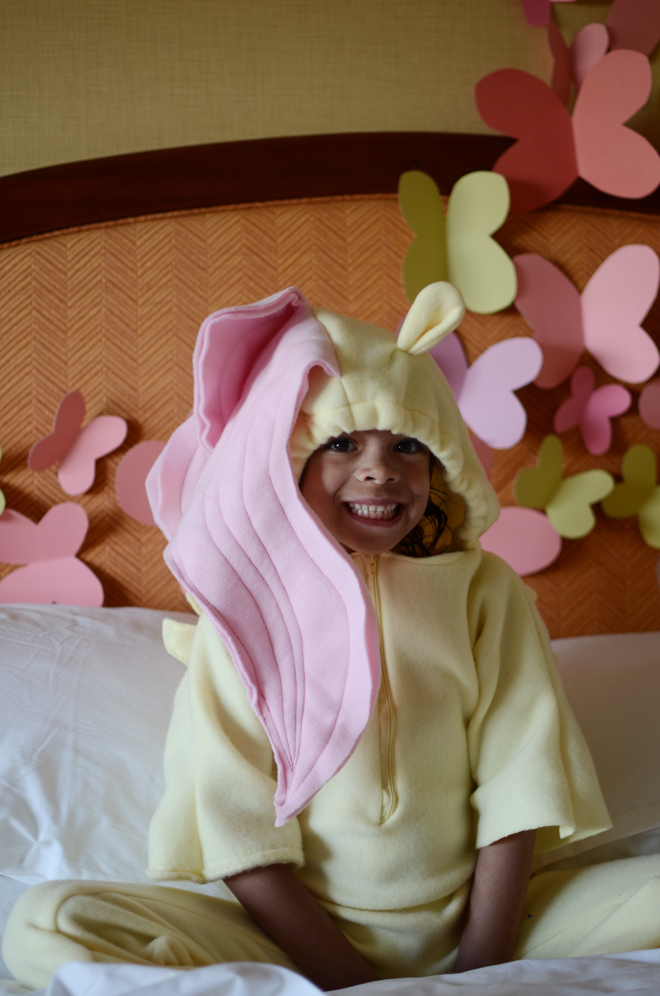 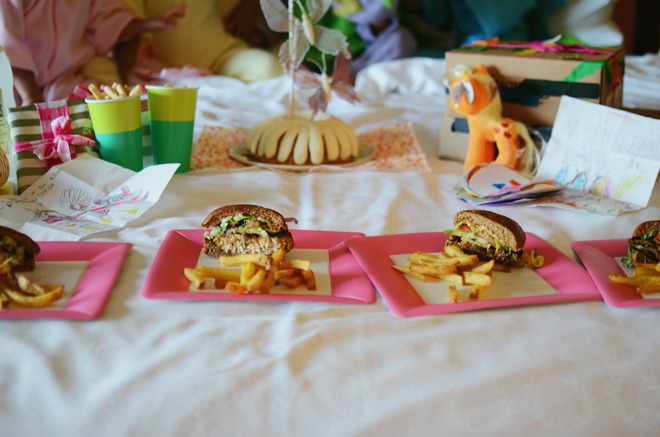 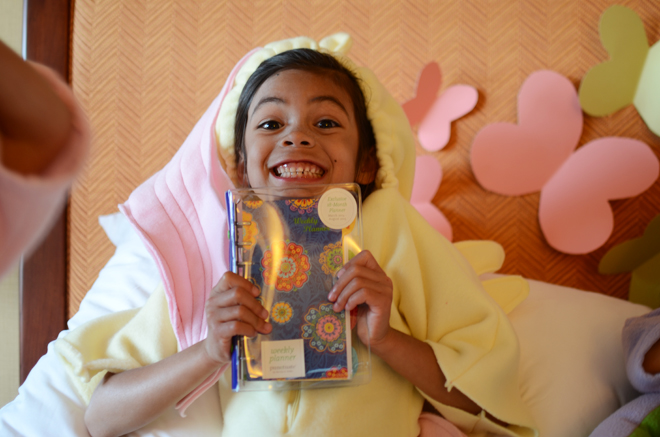 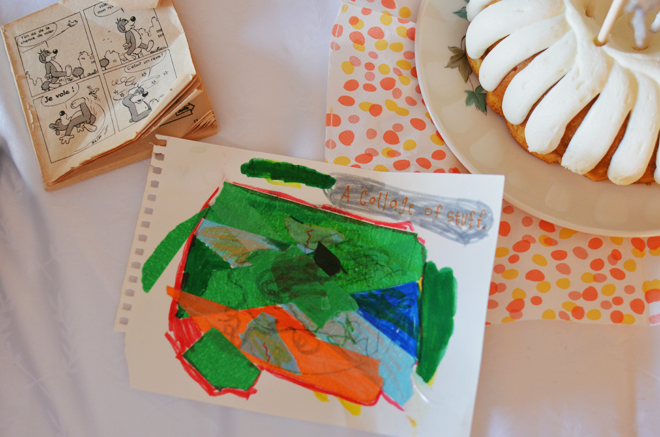 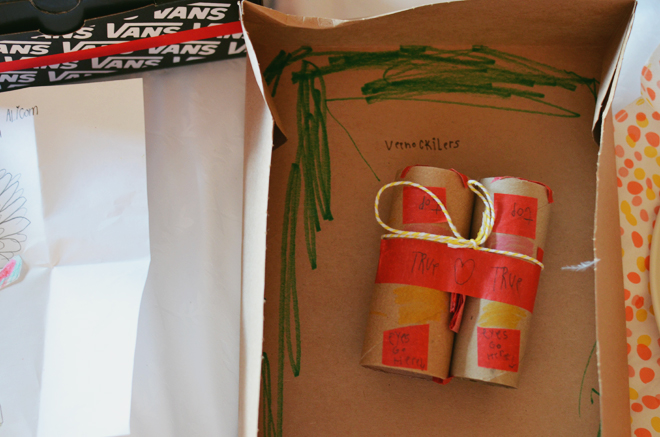 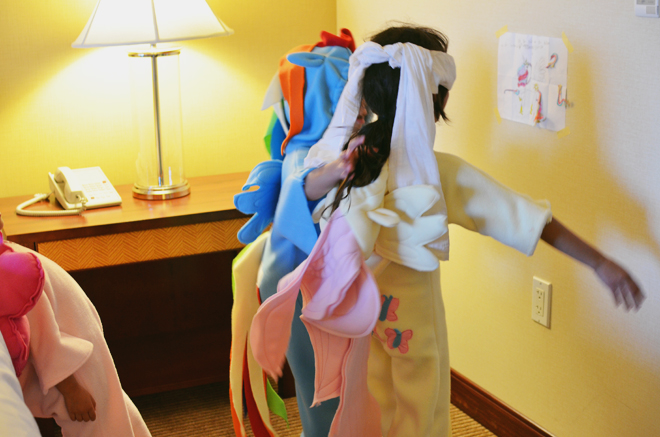 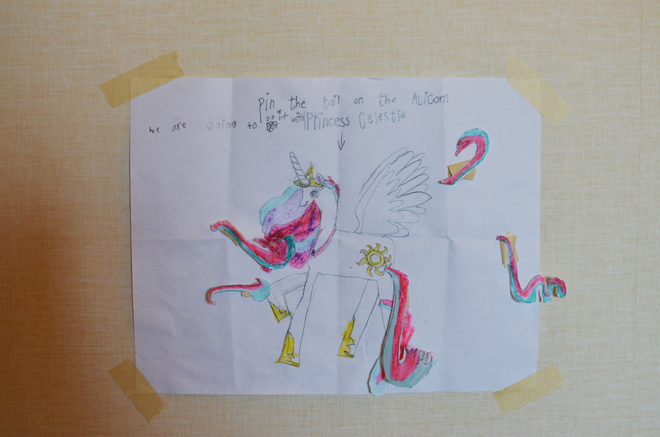 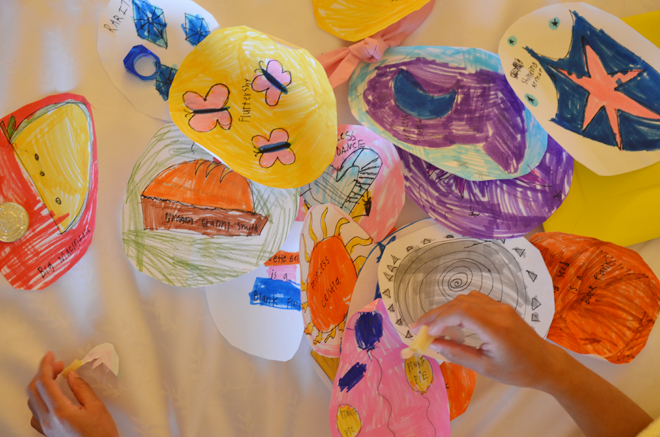 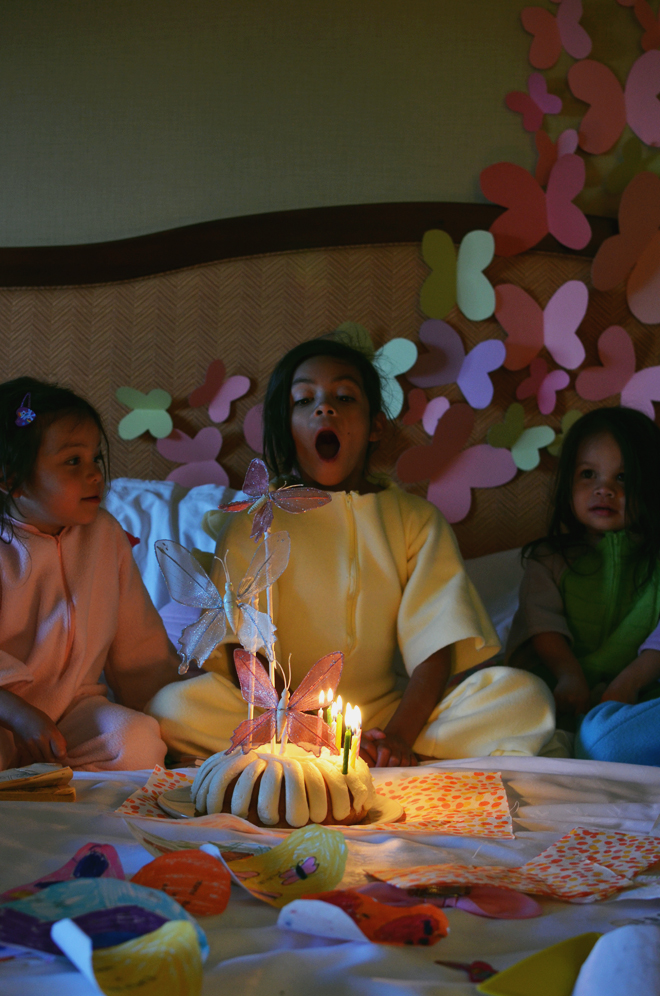 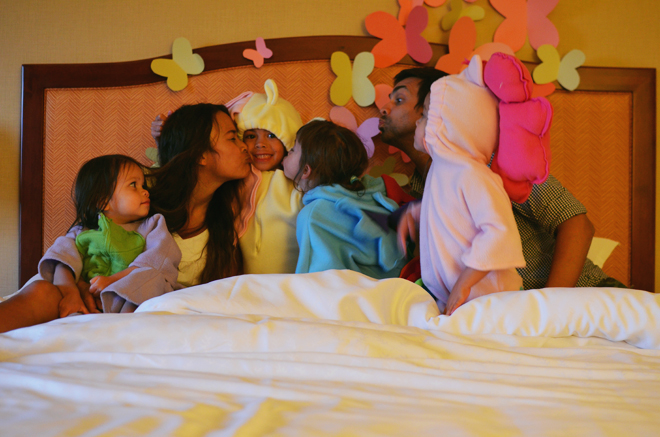 Oh gosh, this post is so late, so my True’s been 8 for a couple months now. She’s the best biggest sister ever, much better than I ever was. Her heart is so sweet and forgiving, and she has a much more nurturing spirt than I ever had (read: not as bossy as I was). Her requests were simple (kind of)… a My Little Pony party at a hotel with home sewn pony costumes. Thankfully, we had Spike and Pinkie Pie from previous Halloweens (here and here), so I had to make Rainbow Dash (Brave’s favorite) and Fluttershy (True’s favorite). It’s no surprise True identifies most with Fluttershy because True is the shyest of the bunch.

Since Fluttershy is her fave, I used that character as inspiration for her party. Fluttershy’s cutie mark are butterflies, so I cut out a bunch of butterflies from card stock and used that for her party background. She requested a bundt cake from Nothing Bundt Cake like Brave had at her party, so that made my cake decision easy. I really wanted to bake her a yellow and pink cake, but I was running out of time, and it wasn’t what she asked for, so it was easy to scrap that idea. I picked up some pretty disposables from Target and used some things I already had too. True made her own pony version of pin the tail on the donkey, and we had all the makings for a splendid party.

Ben and True went out to go pick up dinner from Veggie Grill, while the other girls and I set everything up. When she came back, the girls were in costume and we surprised her with her special party set up. We ate, played party games, opened presents, sang Happy Birthday, watched an episode of My Little Pony, and just showered the birthday girl with lots of love and attention.

She had several gift requests, but we told her (as we tell all the girls for any celebration) just because she wants it, doesn’t mean she will get all of it. She got two of the many requests, and one was her slip-on checkered vans and the other a planner. At the end of the day, her favorite thing was getting the planner. Guess I’ve got a type-A personality on my hands. My favorite gifts she received were all the homemade ones Brave and Soul made for her (see more in her other birthday post). The binoculars she made is pretty sweet!

I love when the girls request a hotel birthday because I find it much easier than throwing a birthday party at the house with family and friends. If they had asked for a party with friends, we would have been happy to go that route too. We always make a vacation out of our hotel birthdays and enjoy staying a few days in another city. For True’s, we went down south near San Diego. See other past hotel parties here and here. Brave’s 7th birthday is in a little over a month and she’s asking for a Transformer party at a hotel. We will see if she changes her mind, but for now, that’s what I’m planning for.